Glenafton made two changes to the starting 11 that defeated Shettleston a fortnight ago with Craig Menzies coming in for the unavailable Jamie Hay and Ryan McChesney for Jamie McGeoghegan, who left the club midweek to work down south. While included on the bench were Glenafton youth players Jack Hannah and Scott Davidson. With both sides enjoying decent winning streaks in the league, 3 games for Glens and 4 for Troon, (who also and boast a 100% home league record) expectations were high of a close encounter – and so it proved.

Play in the first half flowed from end to end like the trains on the overlooking Glasgow-Ayr railway line that runs parallel to Portland Park with most of the attacks hitting the buffers before any clear cut chances could be engineered.

Troon took the early initiative and a good break down the left by Dale Moore ended with an over hit cross drifting well beyond the danger area. The same player won a free-kick 25 yards out after running into McChesney and with dead-ball expert Dean Keenan lining up alongside Chris McKnight to consider their options, the latter leathered it well wide of target. The first corner of the game also fell to Troon but Keenan the target at the near post was swamped by a posse of red shirts with Craig Menzies winning the ball and Joe Andrew mopping up. 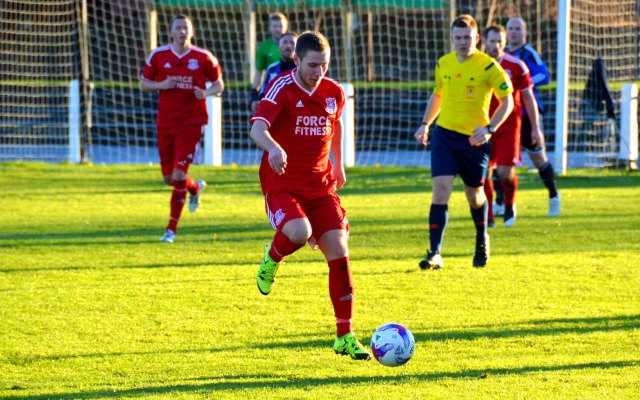 Glens got their game on track and on 14 minutes came close when Craig McGuffie‘s free-kick from the right hand corner of the penalty box had former Glens keeper Ally Semple stretch to tip the ball over the bar. McGuffie’s angled shot from the ensuing short corner kick from the left was blocked and the loose ball quickly recovered by Dan Orsi to build an attack down the right which ended with the ball being whipped across the face of goal and McGuffie’s second bite at the cherry blocked by Colin Spence.

Play continued to ebb and flow from box to box with the visitors now looking the more threatening. On 24 minutes a cute back flick by Michael Wardrope was gathered by Orsi who advanced to the edge of the box before taking out a couple of defenders out of play with an angled pass to the overlapping Ally Park only for Keenan’s perfectly time tackled denying him a shot at goal. The resultant corner kick was cleared to safety.

Troon responded with an excellent run through the middle by Dale Shirkie to set up a shot from 20 yard out which was deflected wide by the outstretched leg of an alert Chris Meikle. The corner kick was cleared by Park’s header and the ball taken from box to box through a lung bursting run by Menzies only for Troon to recover the ball and the counter-attack ending with a cross deep into the box where Alan Cairns got the better of McKnight. Soon after Meikle and McChesney double-teamed to prevent Adam Forsyth and Moore from fashioning a shot at goal forcing the latter to go wide and overhit another cross beyond the back post.

Glens finished the half strongly and although another corner kick was partially cleared the visitors quickly recovered the ball and Andrew turned Keenan in the box before clipping the ball to the back post where McChesney’s looping header was punched away by Semple before the whistle went for John Paul Boyle’s challenge on the keeper. An airborne Semple was then at full stretch as an Andrew angled shot whizzed past the post. In the last action of the half Orsi came within a whisker of connecting with a free-kick at the back post. HT Troon 0 Glens 0

The visitors started the second half very much in the same threatening manner they had finished the first. Boyle burst down the left to chase down an Andrew flick-on and roll the ball back to Cairns to launch it to the back post only for Morgan Brown to get a touch before the incoming Orsi could connect.

Glens quickly recovered the ball through Andrew tight on the right flank who then fed the overlapping Orsi to fire it across the goalmouth only for Armstrong to get the slightest of touches to prevent Boyle from tapping in from close range. The danger not yet over as a Glens’ throw-in set up another chance after Keenan’s headed clearance was trapped on the chest by McGuffie and his volley cannoned off Orsi’s back and the ball sailed over the bar.

Some respite from Troon after possession was gained deep in the Glens’ half to allow Moore and Chatham to make tracks for the box only for Park to hunt them down and nick the ball for Meikle to clear and the telepathic pairing of Wardrope & McGuffie to gather and build another Glens attack. With no easy direct route into the box Troon tried a couple of crosses both of which were cleanly clutched by keeper Brian McGarrity.

The visitors turned the screw again giving their hosts no peace (or goodwill) and seemed to be first and second to every ball with the darting runs by Boyle and the pressing of Andrew spearheading the waves of Afton attacks. The hard-working but now spent Spence was replaced by Jordan Muir and his fresh legs help set up a couple of half chances for Chatham that were snuffed out by McChesney & Meikle. 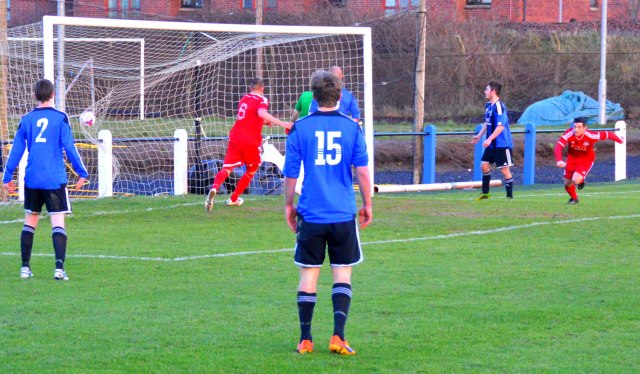 Glens made the breakthrough on 63 minutes and in some style with McGuffie the architect. Rolling the ball back with the sole of his boot he left Chatham stranded and following a quick turn he gained a head start on Armstrong for his dash to the box, aided by a touch from Park and Andrew to take the desperate duo of Keenan and Collins out of play. Now in the box McGuffie got his low drilled shot away before Armstrong’s tackle only for the advancing Semple to block the ball while the Glens midfielder kept his cool and quickly wheeled to clip the ball to the back post where the incoming John Paul Boyle stooped to bullet his header past Brown and into the gaping net.

Two minutes later Troon showed their teeth and Cairns beat Brown in the aerial battle for a free-kick into the box. Meikle then cut out Forsyth’s square ball destined for Chatham in the six yard box and ended Moore’s hope of making something of the loose ball with another timely clearance.
Scare over, Glens were soon back on the front foot! Semple had to race far out his box to beat Andrew to Boyle’s through ball with his defence posted missing. Wardrope’s clever pass then wrong-footed Collins to set Andrew off again and after outfoxing Keenan and McKnight thundered a shot from 22 yards out that flashed wide of the post. Midway through the half the striker sustained an injury while trying to catch out Semple with a looping header. He had to depart soon after and left to a great reception from the travelling support, to be replaced by former Troon forward Mick McCann. 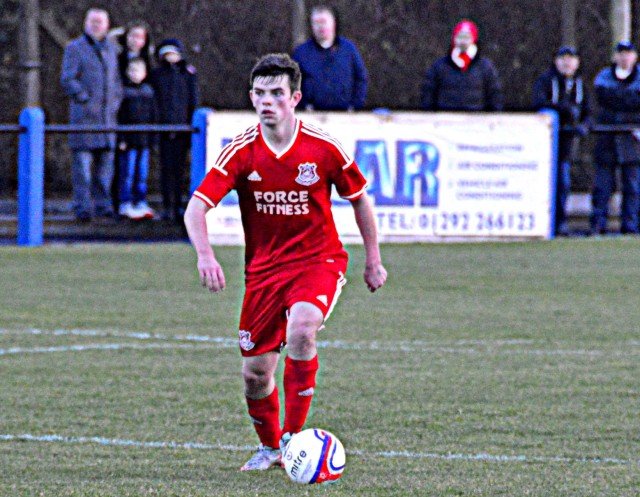 The home side made a couple of changes with Shirkie making way for Sean McKenna and Chatham for Ross McCrea as Troon went in search of an equaliser. Fine play down the left by Muir set up a chance for McKenna but McChesney was more than a match with a perfectly timed tackle and Wardrope was on the spot to snap up the ball and set Boyle off on another attack. After another mazy run McGuffie tried his luck from distance but the shot was high and wide.

At the other end a minor scare after McGarrity appeared to have lost the ball but panic over and normal service resumed as he bossed his packed six yard box and comfortably gathered another corner-kick. Troon continued to press while Glenafton defence continued to stand firm. The final whistle was greeted with raised arms by the men in red, jubilant that their endeavours across the length and breadth of the pristine Portland Park had been justly rewarded. FT Troon 0 Glens 1 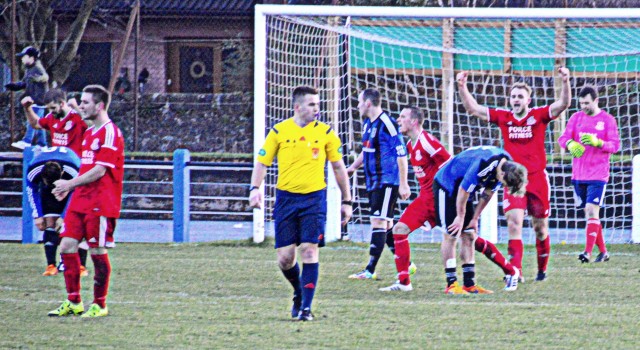