Posted on December 6, 2015 by flowgently

Today Glenafton say goodbye to Jamie McGeoghegan as he heads south for pastures new,  a great loss for the club and a fantastic opportunity for Jamie.

He joined the Glens in the summer of 2013, one of a host of new signings as new manager Tommy Bryce set out to rebuild the side. Jamie missed only one league game and one cup game during the season and topped the appearance table with 38 in total. Classy and versatile , Jamie could play at the heart of the defence or glide effortlessly through the midfield to set up an Afton attack. 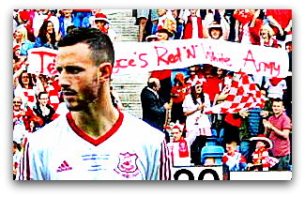 The season ended with that bitter-sweet Scottish Junior Cup final defeat at Rugby Park that for the right reasons will always be remembered for the bond created between the players and the #Afton Army, with Jamie adding an HNC (“Honorary New Cumnockian”) to his impressive growing list of qualifications.

The new season was only a few months old when the Glens triumphed at Troon in defeating Auchinleck Talbot in the Ardagh Glass Cup Final with a faultless display. Adding to his cup winners medal Jamie also topped the appearance table again with 35 in the season.

It’ll come as no surprise to learn that Jamie currently sits top of that table this season having missed only one game to add another 16 appearances to his tally and bring his grand total for Glenafton to 89 appearances. He added a new dimension to his game recently — a goal in the opponent’s net 🙂 . What a goal too, a 25/30 yarder , the 13th in the game in the 14-0 Scottish Junior Cup win over Newmachar United. Those that dare utter the word fluke were made to eat their words when Jamie doubled his tally with an even more impressive strike in the recent 4-2 victory over Irvine Meadow, sadly due to back-to-back postponements over the last two week-ends, in what proved to be his last competitive game for the club.

Jamie also brought celebrity status to the club. His ‘front of house; charms in Glasgow’s fashionable West End won over weather-girl Judith Ralston , who regularly tweets her congratulations on an Afton victory !

It just remains to thank Jamie on behalf of everyne at Glenafton Athletic to thank him for his service on the park and his affable manner off it, a true gentleman. We would like to wish Jamie all the best and every success in the future and of course there will always be a warm welcome at Loch Park.