Although there was plenty of endeavour it proved to be a fairly forgetful first forty-five for both sides with passes going astray, possession surrendered cheaply and corner-kicks causing little threat for either keeper. It was the keepers however that produced the best of the highlights.

On 4 minutes former Troon striker Dale Shirkie progressed down the right to the bye-line before cutting the ball back across the face of goal forcing Glens keeper Brian McGarrity to rush from his line to steal the ball from the feet of Anton Eadie and as the on-loan midfielder from Patrick Thistle tumbled to the ground the loud shouts for a Peasy penalty were ignored while Lewis Crawford’s attempt to curl the ball into the net drifted wide of the far post.

Although nothing came of three corner kicks for the home side in a ten-minute spell their best chance from open play came on 20 minutes. A cute back heel from Joe Andrew was gathered by Ally Park on the edge of the box to roll the ball into the path of Chris Dallas and the striker low shot from 14 yards was pushed inches wide of the post by the finger tips of keeper Mark Quinn at full stretch; the corner-kick that followed, like its predecessors, was safely mopped up.

Three minutes later a powerful run from Shirkie took him to the left-hand corner of the penalty box before he cut inside to curl a low shot for goal that pulled off a great save by McGarrity, the keeper at full stretch getting a hand to the ball at his near post to push it past the far post. The ensuing corner-kick was eventually scrambled clear by the home rear-guard.

On the half-hour mark, from a short free-kick, Corey Pearson whipped the ball into the crowded box which was headed clear by Dan Orsi only for it to fall for the prowling unmarked Crawford to kill the ball before setting up a shot that although it lacked the power to test McGarrity, the bounce did and the keeper did well to get down low to safely smother.

In the closing 15 minutes of the half play continued to shift from end to end however neither side created any further chances to worry the goalies.

The second half was only five minutes old when the hosts appeared to have broken the deadlock after Leon Murphy headed home a Park free-kick from 8 yards out only for it to be ruled out for a push in the box. 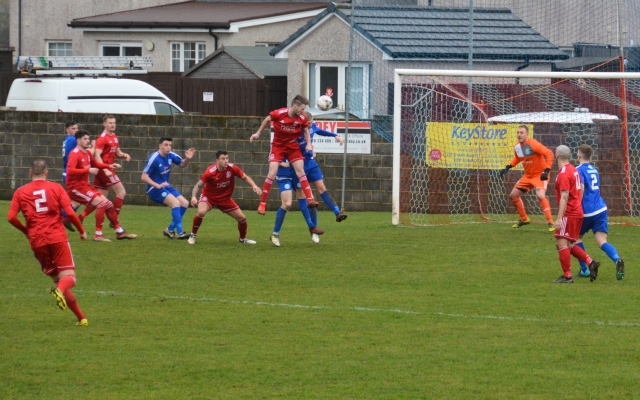 Straight back up the park and although Pearson’s attempt to play the ball into the box was blocked by captain Craig Menzies it fell kindly for Andy Muir, recently signed from Cumnock Juniors, to lash a powerful shot from the left-hand corner of the penalty box that whizzed beyond the reach of McGarrity in full flight and inches wide of the back post.

Glens won back-to-back corners, the first of which was cleared and the second clutched well under the bar by Quinn as Dallas challenged. Back came Peasy and the mobile Pearson and Shirkie combined well to set up the latter to lash a shot from 22 yards that zoomed inches wide.

On 59 minutes the home side countered through Murphy breaking into the left hand side of the box only for keeper Quinn to rush some distance off his line to strip the ball from the midfielder‘s feet before  Andrew’s attempt to play the loose ball was deflected wide.

The corner-kick was won in the air by Orsi and the ball fell for Kyle McAusland on the 18-yard line to crack a shot that thundered off the post before Dale Moore’s attempt to bury the rebound was brilliantly scooped over the bar by the alert Eadie.  Murphy played the corner shot to Alan Cairns to clip the ball into the heart of the box where, with his back to goal, Chris Dallas turned to volley the ball into the corner of the net to break the deadlock on the hour mark.

With their tails up Glens pushed for a second as Murphy broke into the box and on this occasion he got the better of the advancing keeper to create the space for a low angled shot that rolled just wide of the post. On 64 minutes Orsi burst into the box with only the keeper to beat but the mighty Quinn pulled off a stunning save to push the ball over the bar, leaving Glens players with their heads in their hands and soon after applauding the save. 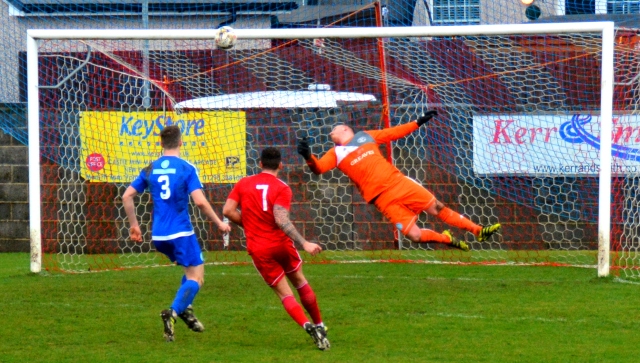 The corner kick was scrambled clear and a fine passing move upfield ended with McGarrity saving from the marauding Crawford. The visitors had weathered the storm and they were next to threaten on 72 minutes when Muir tight on the right flank fired a cross to the far post where Pearson headed inches wide.

A series of substitutions saw Peasy bring on Jamie MacLennan for Antony Eadie and then James Stokes for David Crerand while Glens replace Joe Andrew with Mick McCann.

Glens now back on the front foot looked lively down both flanks. On 82 minutes Orsi earned a corner kick from which McCann’s header flew over the bar. Five minutes later Shirkie won a free kick at the left-hand corner of the penalty box only for his fellow striker Pearson to fire well over the bar. 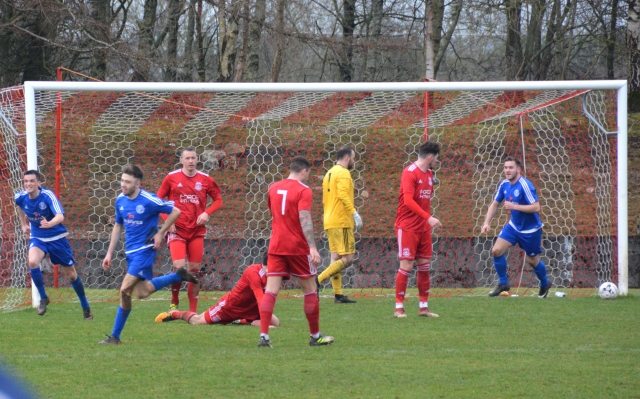 A minute into added time and the visitors broke upfield through Stokes who picked out the overlapping Muir on the right to drive to the touchline and chip a dangerous ball into the goalmouth where although McAusland outjumped Pearson to get his head to ball it landed at the feet of Lewis Crawford unmarked at the back post to drill home from close range. All square with 91 minutes gone – a minute later and the whistle for full-time brought the play to an end.