Glenafton made three changes to the side that started against Auchinleck on Monday night with Dan Orsi, Cameron Marlow and Chris Dallas replacing Jamie Hay, Joe Andrew and Chris McGuffie. John Paul Boyle and Ally Park remained side-lined through injury.

Although the Glens were first to threaten through an early corner-kick that was cleared it was the visitors that took the lead in 3 minutes after breaking down another Glens attack.  The ball was played across field to Gary McCann and in a flash the winger arrived at the bye-line to whip a wicked a wicked ball across the face of goal and although keeper Brian McGarrity managed to push it on the bar the ball fell perfectly for Paul Maxwell to hammer home.

On 12 minutes Meadow mopped up a Glens free kick played into their box and the ball cleared upfield where it was gathered by Liam Finnigan who made a bee-line for goal only for the back chasing Cameron Marlow to time his tackle at the edge of the box to perfection. Two minutes later the menacing McCann left the Glens defence for dead again and his cut back from the dead ball line was met at the near post by Maxwell but his cut attempt to deflect the ball home was blocked by the legs of McGarrity and the loose ball cleared by Ryan McChesney.

At the other end David Gray’s free kick from the edge of the box beat the wall only to be pushed over the bar by keeper Daniel Tobin and again the corner-kick was cleared. The home continued to press for the equaliser and in 26 minutes had the ball in the net. Dan Orsi made good progress down the right and played a one-two with Mick McCann in the box before picking out Cameron Marlow who fired a low shot from 15 yards that Tobin couldn’t hold and Chris Dallas pounced to thump the ball home only to be flagged offside. Five minutes later Gray’s thunderbolt from 25 yards out fizzed wide of the post.  Tobin then cut out a cross from Darren McGill before launching the ball upfield where G. McCann tried the unfamiliar route of through the middle. He twisted past Gray , then gave Chris Meikle the slip before losing his balance as he broke into the box and Craig Menzies blocked his passage to goal.

On 42 minutes Gray’s free kick into a packed box was met by the head of Orsi and the ball seemed destined for the top far corner of the goal only for Tobin at full stretch to pull off a great save before pushing the loose ball away from Dallas but could do little to stop Mick McCann from clipping the ball home at the far post.

Meadow responded well and Maxwell met a corner kick full and his powerful header thundered wide of the post. Former Glenafton player Adam Strachan chipped a free kick into the box and after some Meadow head tennis McGarrity did well to cleanly clutch the ball.

The Glens keeper was soon back in action after the break rising above Maxwell to grab Strachan’s free kick to back post and then later clawing the same player’s cross from under the cross bar before double-teaming with McChesney to prevent Maxwell benefiting from the loose ball.

The home side then enjoyed an intense spell of pressure winning no less than four corner-kicks in quick succession.  However, the visitors broke that spell on 56 minutes after the Glens surrendered possession in the middle of the park with the ball snapped up Liam Flannigan who powered forward into the right hand side of the box and fired a low angled drive beyond into the far corner of the net.

The home side were back level within two minutes when Gray whipped a corner kick to the near post and Dan Orsi’s header from 3 yard out bulged into the net with the keeper rooted to his line. 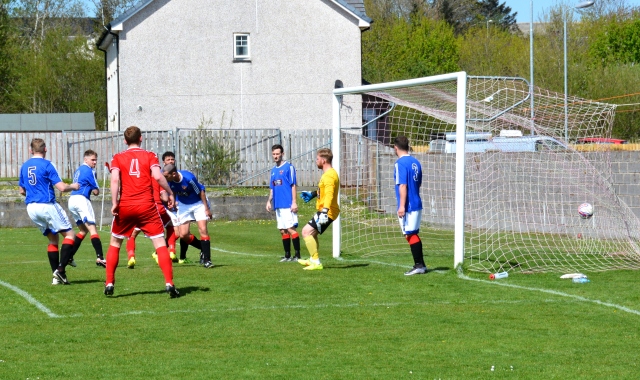 With their tails up and Meadow’s heads down the home side were now very much on the front foot and front line freshened up with Joe Andrew replacing Chris Dallas. On 69 minutes Andrew played a slick one-two with the overlapping Menzies to take the ball to the bye-line and pick out McGill in the middle of the box. The midfielder killed the ball dead and set up the shot perfectly only for it to be blocked by the brave defender and partially cleared before back came the Glen. Menzies again the architect bursting into the right hand corner of the box before blasting a shot that was pushed out by Tobin. The ball fell for Andrew some 15 yards out and his looping header seemed net-bound only for Tobin to get airborne and push the ball over the bar with the save of the match. Another brace of corner-kicks followed as the Glens continued to turn up the heat and later introduced Craig McGuffie for Dan Orsi.

With 10 minutes to go Meadow took the lead for the third time in the cup-tie. Gary McCann and Finnigan combined well down the right before slipping the ball into the box for Stuart McCann to wrong foot the Glens defence and slot a low angled drive into the far post, in a style similar to Finnegan’s goal.

Credit to Meadow there was no attempt to run down the clock and indeed they created a couple of half chances either of which could have killed the tie. There was to be a sting in the tail in the last minute when Cameron Marlow caught the Meadow defence cold to run through on goal an on reaching the corner of the six yard box slotted the ball past Tobin and into the net. 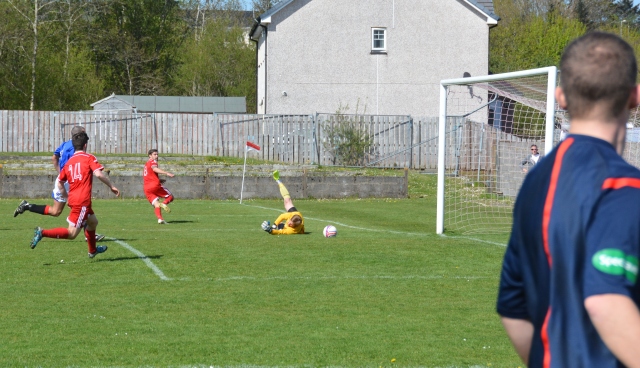 There was to be no further scoring and on to penalties.

McGill fired the Glens ahead in the shoot-out before McGarrity saved Finnigan’s spot-kick. But fortunes soon changes as Tobin stopped McGuffie’s efforts, McChesney hit the post and Gray hit the bar while the visitors three attempts were faultless.