Posted on November 7, 2015 by flowgently

Glenafton made one change from the side that started against Arthurlie last week with John Paul Boyle replacing the suspended Darren McGill. Mick McCann made a return to the bench having returned from his Sahara Desert Trek in aid of the children’s charity Whizz-Kidz.

Meadow made a lively start and came close to taking the lead within two minutes after Gary McCann’s cross from the right was cut across the face of goal and Shaun Fraser’s drive beat keeper Brian McGarrity only for Ally Park to be in the right place to head the ball of the line. Soon after defender Chris Evan’s overlap down the right ended with his cross being cleared and so too the resultant corner-kick.

On 7 minutes Glens carved out their first chance after Joe Andrew fashioned a shot from the corner of the box which whizzed wide of the post. Four minutes later the striker skipped past a defender before unleashing a powerful drive from the edge of the ‘D’ to force a fine one-handed saved from keeper Graeme Shepherd to push the ball over the bar. The corner kick that followed was cleared and a quick break ended with McGarrity running from his line to recover the ball at the corner of his box.

The home side began to enjoy some good possession with surging runs from deep by Jamie MGeoghegan and fine interplay between Andrew and John Paul Boyle up front catching the eye. On 14 minutes Boyle’s pressure wide on the left forced Jamie Darroch into a fluffed pass-back and the Glens striker quickly snapped up the gift and burst into the box before slipping the ball beyond the outstretched leg of Shepherd. A minute later Boyle played a one-two in the box with Andrew before drilling a shot wide of target. 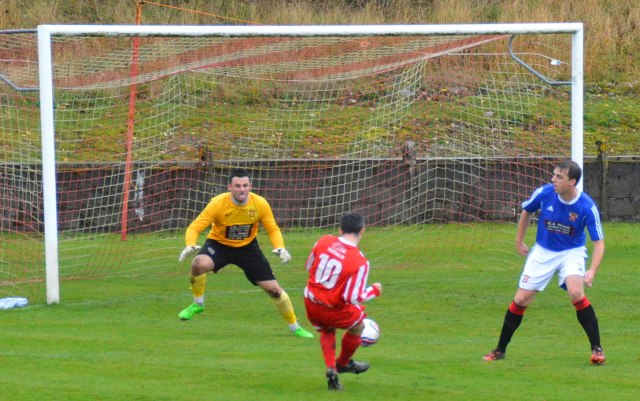 On 17 minutes the visitors drew level following a quick break down the left by Fraser and cross to the back post which was headed back by McCann and looked to be cleared by McGeoghegan only for a poor touch to give possession away and the ball snapped by Liam Finnegan and quickly squared to Ross MacPherson with time and space to pick his spot and fire home from six yards out.

The game entered a phase where possession was equally shared and clear cut chances were thin on the ground. On the half hour mark Meadow pressure produced some head tennis in the Glens’ box and McGeoghegan won the finally rally to prevent MacPherson’s close range header. Three minutes later Craig McGuffie picked up the ball on the half way-line and weaved past a host of blue shirts before breaching the Meadow box only for Darroch’s last ditch tackle to stop the shot at goal. In the closing seconds Boyle chased down Andrew’s head flick only for Shepherd to race from his line to smother the ball with Evans in support. H/T Glens 1 Meadow 1

As in the first half the visitors started off strongly and a break down the left by Mark Keenan set up a one-two in the box between Finnigan & Fraser which ended with a well-timed tackle by Park on the former. The home side were forced to replace the injured Jamie Hay with Ryan McChesney and quickly had to regroup as Meadow continued to press. Back-to-back corner kicks concluded with the second being partially cleared and the ball quickly lobbed back into the danger area where MacPherson headed the ball back to  Chris Evans in acres of space and defender calmly slotted the ball beyond McGarrity. Home protests for offside were instantly dismissed and the visitors were ahead after 52 minutes. Three minutes later McGarrity did well to get down low to save Fraser’s shot from the corner of the six yard box.

A minute later Glens created their first chance of the half after Mick Wardrope played a neat one-two with McGuffie to progress deep into the box only for Marc Twaddle’s challenge to take the steam out of his shot and Shepherd gathered comfortably.

On 58 minutes the Glens drew level with an excellently executed goal beginning with the architect Boyle. He shook off Robert Halliday before skipping to the right hand side of the box and after feigning to square the ball to a team-mate he accelerated past Darroch to the bye-line and chipped a glorious ball into the danger area taking three blue shirts out of play and could look on to watch Joe Andrew rise above Evans and bullet a downward header home.

A minute later Fraser had the ball in the net but not before the offside flag snuffed out premature celebrations. Nevertheless Meadow continued to press and Fraser’s near post header from Halliday’s cross went inches wide. Midway through the half a scramble in the Glens’ box ended with the visitors winning a free kick on the edge of the box and although Fraser curled it past the wall the ball sailed well over the bar.

Having weathered the mini-storm the hosts began to press with some regularity. Park’s throw-in from the right was gathered by Andrew on the dead ball line before he clipped the ball back for the incoming Dan Orsi to power a long angled shot just wide of the post. Soon after Wardrope’s corner kick was partially cleared and the ball fell for McGuffie some 20 yards out and his shot through a crowded box was well held by the keeper. The pressure delivered dividends on 72 minutes after Boyle slipped the ball to Wardrope on the left and after cutting into the box he threaded the ball to Andrew who in a flash swivelled to thrash the ball between two defenders and the flat-footed Shepherd into the welcoming net.

With their tails up the Glens went in search of more through another seemingly effortless surging run by McGeoghegan who slipped the ball to McGuffie who in turn fed Boyle wide on the left and although his whipped cross caught Shepherd unawares, Darroch was on hand to clear the ball before Andrew could pounce. Orsi recovered the ball and rolled it back to Jamie McGeoghegan who took a touch or two before launching the ball from 30/35 yards leaving players and supporters alike to follow its trajectory and watch its descent over the keeper at full stretch and its touch down cushioned by the rigging of the net. The Glens now had a two goal cushion with a quarter of hour or so remaining.

Although Meadow’s heads never went down the hopes of another fight back had been extinguished. Glenafton brought on the fresh legs of Mick McCann to replace the outstanding John Paul Boyle who headed for the dug-out to rapturous applause. MCann was soon in the thick of it and a Glens’ corner kick was punched away to safety by Shepherd and at the other end a glancing close range header came close to halving the deficit but there was to be no more scoring. F/T Glens 4 Meadow 2