Glenafton completed their league campaign with a Monday night visit to face a rejuvenated Beith . The Bellsdale side had won their last three league games in a row (all at home) following the return of manager Johnny Millar who had led them to the Premier title three seasons ago and of course scored the winning goal for Glenafton in the Scottish Junior Cup final twenty years ago. 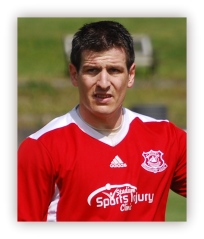 The home side took the lead through Kenny McLean, a lead they held to half-time. Seven minutes into the new half the visitors drew level when a Ryan McChesney cross was controlled by Paul McKenzie and though surrounded by a giant defence crashed a great shot into the roof of the net for his 12th goal of the season. ‘The Mighty’ stormed back and applied loads of pressure on a Glens defence that stood firm. Nevertheless the New Cumnock side always looked dangerous on the break and a minute beyond the regulation 90 minutes, John Dempster bustled his way into the box and as keeper Adam Strain left his line the striker exquisitely chipped the ball over his head for a dramatic winner. The drama was not over and Beith were reduced to 9 men as McLean and Marc McShane were each shown a red card.
Glenafton: Semple; McChesney,  G. Mitchell.  McKillen,  Menzies; McKenzie,  Eaglesham,  D.Mitchell,  Dempster; Robertson & Armstrong  Subs  Cochrane,  McEwan,  Potter,  Donnelly,  Dunsmuir