Prior to kick-off a minute’s applause took place in memory of Kilbirnie Ladeside supporter Scott Falconer who sadly passed away recently.

Glenafton made one change to the starting eleven that faced Troon last Saturday with Ryan Nisbet making way for Matthew Reilly.

In glorious sunshine on a bowling green of a pitch the visitors were soon stamping their authority on the game pressing forward in numbers. On 5 minutes Dale Moore slipped a through ball for Joe Andrew to chase down on the right-hand side of the box before squaring across the edge of the six-yard box for the incoming Moore only for Hughes to intercept at the expense of a corner kick which was headed clear.

Kyle McAusland and Moore then played a one-two through the middle before the former clipped a balled into the far end of box which was gathered by Matthew Reilly and rolled back for Moore to thump a shot that was well blocked by Michael O’Byrne. The resulting corner was again headed clear but the ball quickly recovered by Findlay Frye to feed Craig Pettigrew on the outskirts of the box only for his shot to sail high and wide of the target. 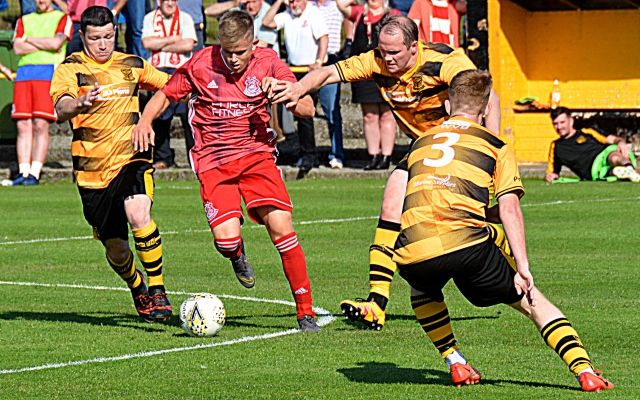 Most of the play was taking place in the Ladeside half with the home side enjoying the occasional break that would fritter out.

On 16 minutes Moore made another powerful run through the middle which was ended with a fouljust outside the “D”. Although McAusland’s free kick rebounded off the wall the hungrier Glens regained and patiently kept possession to go again and their efforts rewarded with another corner kick that was clutched cleanly by keeper Joe Wilton.

Midway through the half Ladeside broke when John Kelly picked up a pass from O’Byrne and tried his luck from 25 yards but the shot lacked power to test David Wilson, the young keeper cleanly catching with both hands.

Back came the visitors as the lively Reilly drove through the middle before he picked out Frye in the box but with no way through, he slotted the ball back to McAusland to instantly thread the ball back into the box for Moore to lash home from 12 yards out, but from a yard offside. 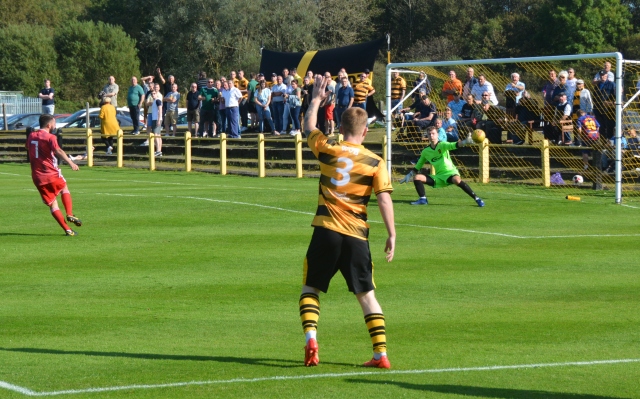 Reilly and Moore combined well down the left to win the Glens another corner-kick which was mopped up well by Kelly.  Joe Andrew then held off two defenders in the box before picking out the incoming McAusland to fire an angled shot that flew over the bar.

On 27 minutes Reilly and Moore initiated another attack that concluded with the latter trying to pick out Andrew in the six-yard box only for Hughes to make a timely intervention to clear the danger.

Ladeside broke down a Glens attack in the centre circle releasing Finlay down the left to drive for the box where he was robbed of the ball by Pettigrew.  Soon after Finlay had a second bite at the cherry and on reaching the box squared the ball for Joe Scullion only for Craig Menzies to cut out and clear.  At the other end O’Byrne matched Menzies with a timely tackle on Park just inside the box.

On 33 minutes the home side passed up a great chance to break the deadlock after Wood whipped in a dangerous ball from wide on the right which flew over the head of the leaping Frye but caught Scullion on the six yard line off guard and the ball bounced off his feet and inches wide of the post.

After a brief water-break for both sides, Scullion almost made amends when from the edge of the box he cracked a low angled shot that Wilson did well to get down low and at full stretch push the ball away which was booted clear by Menzies as Finlay threatened.

Back came Glens through Andrew chipping a ball into the box for Moore to hunt down with Kelly for company. The Glens midfielder appeared to get the better of the duel and progress to the edge of the six-yard box as Kelly stumbled to the ground but before he could tee up a shot the whistle went for a free kick to the home side.  A minute later Park got between two defenders to win the race for the ball only for his attempt to lob the advancing keeper from 16 yards out fly over the bar.

Incredibly despite dominating much of the first half the Glens went a goal down with the last kick of the first half. Ladeside won a corner of the left, their first of the game, where Finlay played it short for a one-two with Peter McGill before picking out Scullion on the edge of the box and although his first touch was poor he regained control of the ball, evaded two defenders before  leathering a low angled shot beyond the reach of Wilson into the far corner of the net.

The Glens started the second half brightly. Reilly earned an early corner-kick that came to nothing; there was a half-hearted shout for a handball in the box; Hughes close attention forced Moore to shoot narrowly wide from 6 yards out ; Moore then did well to manufacture a shot from the corner of the box that drifted wide of target and Reilly curled a dangerous ball into the box that Wilton palmed away. 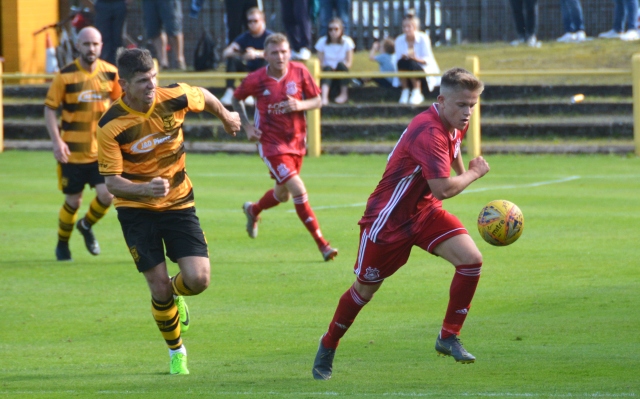 Ladeside reacted with a double substitution on 52 minutes with James Finlay and Connor McVey making way for Jamie Longworth and Chris Craig.

The tide began to turn in the home side’s favour which saw them dominate large passages of play in the remainder of the half and create the best of the chances on offer.

Scullion floated a free kick deep into the box that was headed wide by Menzies for a corner kick which Scullion also executedas Ladeside pegged the Glens back for quite a spell which included further free kicks and corner kicks that were defended resolutely.

On 65 minutes the visitors made a double substitution with Dan Orsi and Lee Gallacher coming on for Ally Park and Matthew Reilly.

A minute later Mitchell, from close to the right-hand corner flag, clipped a ball to the back where Ferry leapt head and shoulders above others only for his header to dip inches over the bar.

Glens were now seldom seen as a serious attacking force with the few breaks that they conjured up petering out and Ladeside responding with another period of sustained pressure.

The visitors made their final substitution on 73 minutes with Ryan Nisbet replacing Joe Andrew and the game slowly became more evenly balanced in terms of possession and the few remaining chances.

With 10 minutes to go O’Byrne, deep in the box with his back to goal, was the target of a long throw in from the left which he cutely tried to guide into the net with an overhead kick only for the ball to drop kindly into the hands of Wilson. At the other end Frye’s shot from the edge of the box was blocked and he quickly recovered the loose ball to feed Orsi with his shot flying over the bar.

On 83 minutes Kilbirnie made their final substitution with Darren McLean coming on for goalscorer Scullion. The game continued to drift back and forth and the final chance fell for Longworth who was denied a last minute goal by a fine save from Wilson. 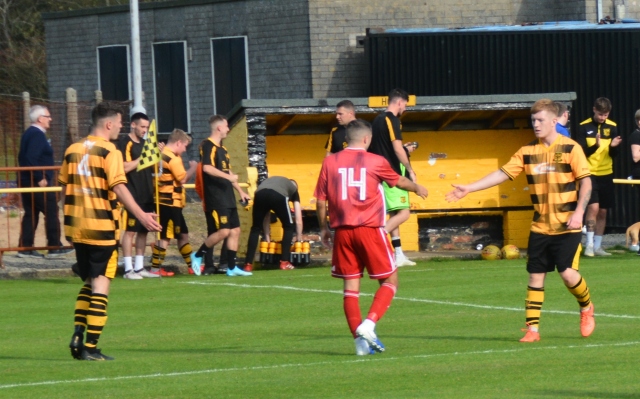