Glenafton hosted Championship side Cumbernauld United in the inaugural Maggie Buchan Memorial Shield pre-season friendly. Prior to kick-off Glens manager Craig McEwan and club captain unveiled Maggie’s memorial bench situated in front of the clubhouse in the presence of Maggie’s daughter Lorraine and other members of the family. 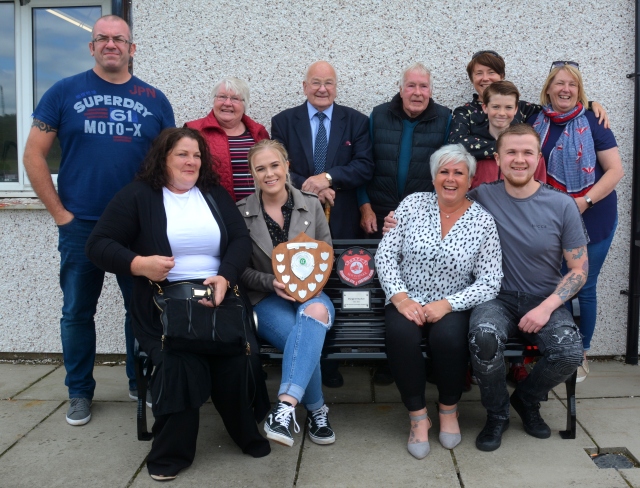 In the Glenafton line-up were defender Craig Pettigrew and midfielder Lee Gallacher two of their three summer signings. Keeper Brian McGarrity was also in the starting line-up having missed the closing games of last season through injury.  In the Cumbernauld line-up was former Glenafton youth midfielder Klark Thomson.

The home side were soon on the front foot and on 7 minutes birthday boy Ryan McChesney’s header, from the first corner of the match, looped over the bar.  Cameron Marlow then tried his luck from 25 yards only for his shot to drift wide of target while at the other end John Cunningam’s 30 yard effort suffered the same fate.

The Glens continued to press and Craig Menzies breached United’s box with a foot & head combination before the ball dropped for Joe Andrew to lash a shot that dipped over the bar. The home side switched play from left to right for Lee Gallacher to drive to the bye-line and cut the ball back for Ally Park only for his shot to be blocked. Alan Cairns then picked out Andrew in the box with a peach of his pass but his shot too was blocked by Ross McCabe and deflected wide for a corner kick that was headed clear.

On 17 minutes Park nicked the ball as United looked to break and rolled it upfield for Andrew to gather at the right-hand corner of the penalty box to clip the ball into the goalmouth where Mick McCann nicked in front of the defender to guide the ball home from six yards out.

The goal temporarily spurred Cumbernauld into action for although they had been stroking the ball about well, they had yet to threaten Brian McGarrity in the Glens goal. Another slick passing move ended with Alan Cairns blocking Klark Thomson’s cut back from the goal-line at the expense of a corner kick which was headed on at the near post for Chris Hall to meet at the back post only for his shot to slip wide.  Soon after another corner kick was headed clear by Menzies.

Back came Glens and back-to-back corner kicks concluded with Marlow whipping a ball deep into the goalmouth that was missed by attackers and defenders alike to whiz past the back post. Dale Moore then snapped up a loose ball at the edge of the box before drilling a low shot that flew wide of target.

On 32 minutes Glens doubled their lead with a well worked goal. McCann killed a long clearance from McGarrity deep in the United half and squared the ball to Moore on his left. Head down the midfielder burst into the left hand side of the box, leaving one defender for dead while attracting the close attention another, before clipping a delightful ball over head of the keeper and a third defender at the near post for the unmarked McCann to ghost in at the back post to side foot the ball into the empty net.

Five minutes later Cairns picked out Andrew in the box and his knock-on was chased down by Park but keeper Darren Hill was alert to the danger and rushed from his line to bravely pounce on the ball. The home side finished the half with a flurry of chances. Gallacher, not for the first time, cleverly switch played from right to left with a fine ball to Moore to drive deep into the box only for Hill to get down low and save his shot comfortably. Gallacher then cut inside to curl a powerful shot from 22 yards that was pushed away by the keeper and although McCann’s attempt to drill home the loose ball beat the keeper at full stretch the ball sneaked inches wide of the post.

Glens brought on Craig Burns for Brian McGarrity while Cumbernauld made four changes at the break with keeper Graeme Murphy replacing Darren Hill, Alan Benton for Jack Harrison, Paddy McCabe for John Cunningham and Cameron Taylor for David Mackay. And so, began the second half of the proverbial game of two halves!

Paddy McCabe won an early corner that was headed clear at the near post by Cairns as the visitors pressed from kick off. On 54 minutes Hall showed good composure in a crowded box to pick out Keiran McAleenan who side stepped McChesney to set up a shot at goal that was well saved by Burns. A fine move saw the ball quickly moved from deep on the left to upfield on the right where Benton whipped a wicked ball across the face of goal that whizzed inches wide at the back post. The same player then drilled a low angled shot from inside the box that Burns did well to block at the near post before McChesney cleared the danger for a corner kick as the lively McCabe threatened. The corner was cleared and the Glens had some respite but were struggling to break with any sort of menace into their opponents’ half.

Back came United and on 65 minutes McCabe burst into the box but his shot was blocked by McChesney and Hall’s attempt to bury the rebound sailed wide of the post.

Cumbernauld continued to dictate play and on 80 minutes their efforts were rewarded. Paul Callander won the ball in the centre circle before passing it to Hall who then slid the ball to match Paddy McCabe’s run into the box who finished in style with a low angled shot into the net.

Glens countered with Moore breaking down the right and looping a high ball into the box which was met well on the drop by Terry only for his volley to sail wide of target.

At the other end Cumbernauld’s claim for a hand-ball was waved away the ball bouncing off Pettigrew’s shoulder. On 85 minutes however the visitors levelled the match after Benton whipped a wicked ball in from the right and Hall clipped it high over the head of the diving keeper and despite Menzies’s acrobatic attempt to clear the descending ball on the line, it nestled in the net.

Glens kicked off the penalty shoot-out with Marlow and McChesney scoring before keeper Murphy saved from Park. Cairns and Gallacher then scored for Glens to make it 4-4 leaving Cameron Taylor the chance to win it for Cumbernauld only to blast the ball over the bar. Pettigrew made it 5-4 for Glens and after some delay Paddy McCabe stepped up for United only for Burns to pull off a fine save. 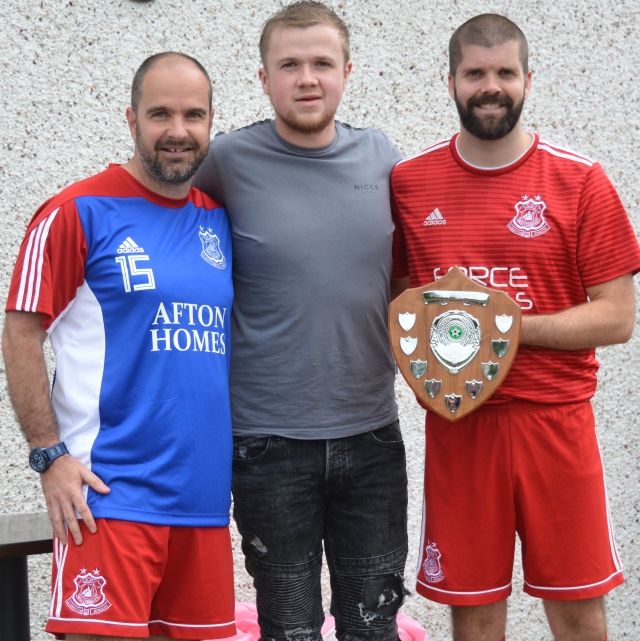