Glenafton welcomed Pollok to Loch Park for their Macron Scottish Junior Cup 4th round tie in what was the ninth occasion that the two sides have been drawn to face each other in the national competition. Injuries impacted on the starting line ups for both sides with the hosts missing top goal-scorer Chris Dallas and captain Craig Menzies, both of whom will be side-lined for some weeks.

The Glens were first to threaten as Leon Murphy gathered a flick-on from Joe Andrew to bomb down the left with a squadron of black and white defenders in pursuit. The young midfielder had progressed to the corner of the six yard box before the back-tracking Paul Gallagher made a timely intervention and the chance was gone. 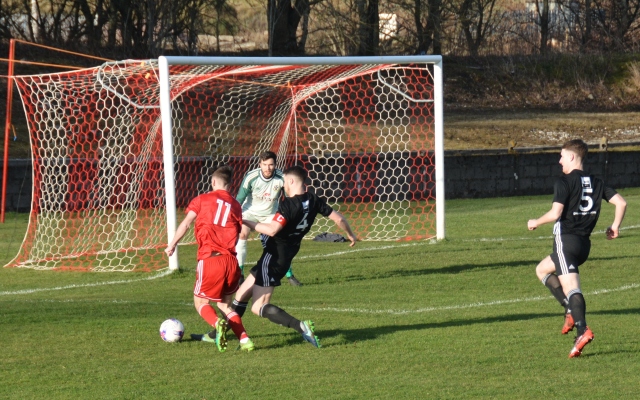 The visitors countered with a quick break down the left ending with Stuart McCann lashing a vicious angled shot from the 18 yard line which was finger-tipped wide by keeper Brian McGarrity, who had advanced to the edge of his six yard box. The corner-kick was played to Ryan McGregor at the near post where his shot was blocked at the expense of another corner which was duly cleared.

Back came Glens through Alan Cairns finding Ryan McChesney who switched play from left to right with a long ball for Conor Lynass that was intercepted and headed wide by the head of Danny Boyle. The corner kick was mopped up and Pollok were back on the offensive.

On 10 minutes former Glens striker David Gormley, who was having little joy in the Glens’ box, won a free-kick some 30 yards out that was floated into the box by Brian Young and although McGregor won the aerial battle his header was safely gathered by McGarrity . 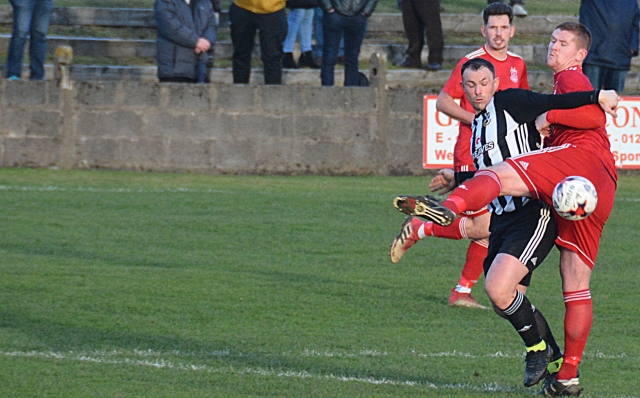 Although clear-cut chances were thin on the ground the visitors passing was much sharper than that of their hosts whose possession was often surrendered by a stray pass.

On 16 minutes Murphy’s low corner from the left was knocked on at the front of the six yard box by Andrew and the loose ball cleared to initiate a counter-attack down the right by Stefan McCluskey which concluded with the award of a free-kick against McChesney close to the corner. McCluskey clipped the ball to the back post where McGregor’s looping header pulled off a great save from McGarrity finger-tipping the ball away from the postage-stamp of his goal.  The keeper got both hands on Young’s corner-kick and captain Kyle McAusland cleared the loose ball.

Pollok manufactured three half-chances in a two-minute spell without however testing the keeper – Gormley’s effort from 20 yards flew high and wide of the target; McCluskey skewed his shot from the edge of the box well wide of the post and McCann’s strike from inside the box sailed over the bar.

The Glens enjoyed the lion’s share of the chances in the closing quarter-of-an-hour of the half with Findlay Frye and Dale Moore asserting themselves in the middle of the park.  The pressure almost paid off on 39 minutes when Mick McCann, deep in the box,  got between the two centre backs to power a header for the top corner only for keeper Jordan Longmuir to leap and push the ball round the post.

The corner kick was only partially cleared and the ball quickly recovered by Murphy who played a slick one-two with Andrew before driving into the left hand side of the box and drilling a low angled shot that although beat the diving Longmuir it rolled wide of the back post.

In the last action of the half Moore slipped the ball to Lynass wide on the right to whip a vicious ball into the six yard box beyond the reach of the defenders for the incoming Frye at the back post only for the former Pollok player to miss making contact by a stud.

Findlay Frye – a whisker away

The home side were quick of the mark winning back-to-back corner kicks within a minute of the restart. Pollok countered with a corner of their own which was cleanly clutched at the back post by McGarrity.

The scene was set for the rest of the half as played flowed from end-to-end in determined fashion albeit with little reward in terms of goal scoring chances. 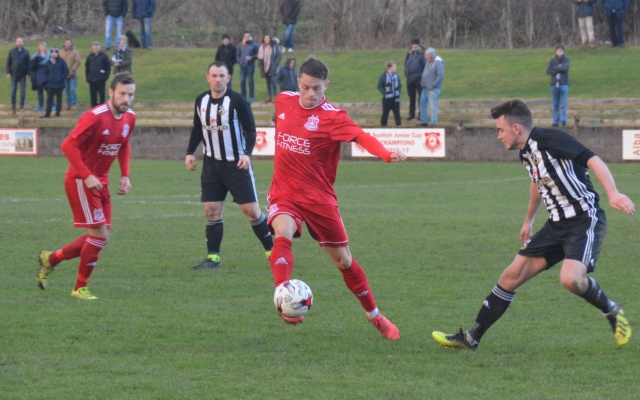 On 51 minutes Frye chased down a fine ball through the middle from Lynass only for the back-tracking Boyle to make a timely tackle at the edge of the box at the expense of a throw-in. Glens continued to press through Darren McLean on the overlap down the right to fire a ball to the back post where Grant Evans’ clearing header fell for Frye to lash a shot from 15 yards which rebounded off the back of McGregor and the loose ball cleared.

Pollok brought on Ewan McNeil for Danny Boyle, after the big centre back hadn’t recovered from a bad knock late in the first half.

The visitors floated a free kick from wide on the left deep into the box where McCann under pressure from McChesney headed well over the bar.

On the hour mark Murphy won a corner on the left which was headed clear by Gallagher and the ball quickly gathered by Moore to fire a shot from the corner of the box that was still on the rise as it flew over the bar.

On 62 minutes Pollok replaced David Gormley with Adam Forde as play had entered a scrappy period with neither side creating any openings of note. Ten minutes later Glens brought on Dan Orsi for Conor Lynass.

Darren McLean’s free kick from 22 yards out saw Longmuir get down low to push the ball past the post for another corner-kick that came to nothing.

Pollok made their final substitution bringing on Shaun Fraser for Stuart McCann as the game entered that phase of ‘a goal the winner’ in a Scottish Junior Cup tie. Fraser was instantly in the thick of the action. He gathered a ball chested down by Forde before driving for the bye-line to square the ball into the six yard box which was blocked by McChesney only for Forde to pounce on the loose ball to thump a first time shot which thundered off the chest of McGarrity and although the loose ball fell for Young he couldn’t find the target.

On 82 minutes Glens brought on Ally Park for Darren McLean in a final push for a winner. McAuland from deep in his own half launched a free kick into the box which was headed on by Orsi and it was Longmuir rushing from his line that caught the descending ball preventing Andrew putting the final touch to the move.

McGarrity showed a clean pair of hands at the other end when he leapt head and shoulders above all others to pluck a corner-kick out the air as the Pollok defenders lined up at the back post.

Into added timed and Pollok won a free kick on the outskirts of the left-hand side of the penalty box. Young’s kick was headed high into the air by Frye and McGarrity judged its descent perfectly to capture the ball as Evans threatened. In last action of the match McCann picked out Orsi who did well to give a defender the slip to set up a shot from just outside the box which Longmuir smothered safely.

Handshakes and a replay

The replay will be played at Newlandsfield Park next Saturday 1st December KO 1:45pm