Posted on September 1, 2018 by flowgently

10 man Glens suffered a second successive defeat after losing out by the odd goal in 5, in a game full of chances at Cambuslang. The visitors opened the scoring in 2 minutes with a beautifully crafted goal. Captain Craig Menzies intercepted a pass on the half way line to drive forward before slipping the ball to Conor Lynass on the right who quickly delivered a diagonal pass to Joe Andrew on the outskirts of the box who rolled the ball back to Cameron Marlow who in turn released Dale Moore down the left to fire a cross into the six yard for the incoming Chris Dallas (right)to guide the ball into the net.

The home side were all square two minutes later after a free kick floated into the box  was headed on by former Hurlford striker John Gemmell for Scott Faulds to poke home from close range. Cambuslang took the lead after good work down the right by former Cumnock player Callum McRobbie before his cross to the back post eventually fell for  Gemmell to net easily. A deflected shot crashed off the post as Glens went in search of an equaliser before being dealt blow after Alan Cairns earned a straight card for denying Rangers a goal scoring opportunity just before the break. 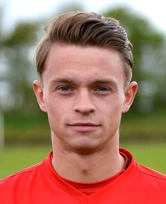 Chances came and went for both sides in the second half before a cross from the left found Gemmell in the far side of the six yard box and his powerful header exploded off the ground and over keeper Brian McGarrity. Glens pulled one back after Conor Lynass (left) gathered a through ball from Findlay Frye at the edge off the box before playing a one-two Joe Andrew and drilling a low angled shot in at the back post. Try as they might in the closing minutes an equaliser eluded the Glens.