Auchlinleck Talbot maintained their push for the title with a narrow win over current champions Glenafton Athletic in a hard-fought encounter at Beechwood Park. 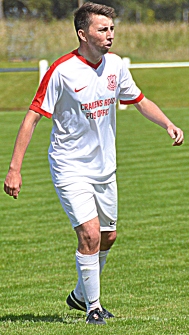 Sean McIlroy gave the home side an early lead with a clincal finish from inside the box. The visitors equalised before the break with Dale Moore finishing off a fine passage of passing. Jamie McKernon switched play from deep in the left to upfield wide on the right with Kyle McAusland. The defender’s header into the box was gathered by Mick McCann who hooked to it Ally Park on the overlap to square the ball into box for a one-two with Joe Andrew before drilling it low to the back post where the incoming Dale Moore (left) slotted it home beyond the touch of defenders on the line.

There was little between the two sides in the second half and it took a late strike by substitute Mark Shankland to score what proved to be the winner for Auchinleck despite Glenafton’s claims of keeper Brian McIlroy view being blocked by two players on offside positions.