Glenafton came within a whisker of taking an early lead after Mick McCann kicked off and 15 seconds later he was picking up a pass from Conor Lynass in the box before drilling a low angled shot wide of the post.

On 6 minutes Keiren Wood zipped down the right flank before cutting the ball into the box where although Mark McKenzie completely mis-timed his shot the ball rolled onto Andy Muir to have a pop at goal that was blocked by the stooped head of Ryan McChesney and cleared by Craig Menzies. 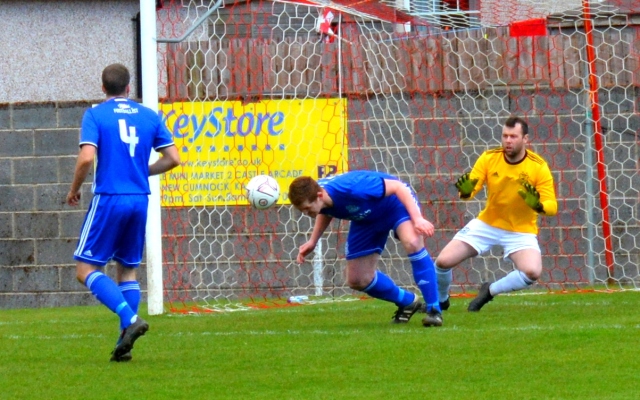 Glens made progress down the right and although Joe Andrew and McCann couldn’t unlock the ‘Nock defence they brought Kyle McAusland into play who the picked out Ryan Borris on the right hand corner of the penalty box. The midfielder did well to engineer a shot only for it deflect of the leg of Paul Burns and the ball, having lost its sting, fall safely into the hands of keeper Darren Johnson.

On 14 minutes the visitors won the first corner-kick of the game after McAusland ended Muir’s attack down the left. Although Muir’s corner never got beyond first man Andrew his header was knocked on by Richard Murray before Jamie McKernon did enough to take the ball from the toes of Scott Anson and send the ball wide for another corner-kick. In stark contrast to the first this corner, from the right, was overstruck and the danger was over for the home side. 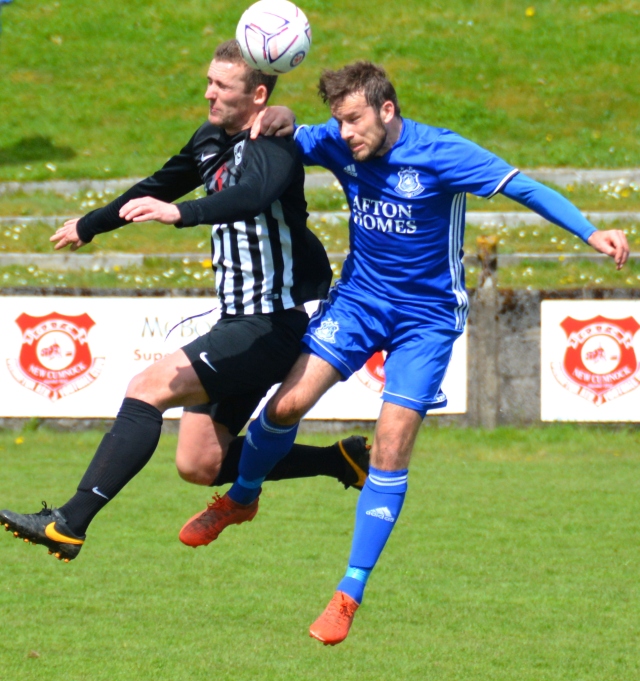 Play got bogged down in the middle park for a spell before Glens enjoyed a decent spell.  On 19 minutes Dale Moore dispossessed Muir on the half-way line and threaded a fine ball through the middle for McCann to get the jump on the centre backs but was adjudged to have done so from a offside position. A minute later the Glens striker hunted down Johnson as he tried to recover a poor pass back, but the keeper kept his cool to side step McCann and launch the ball upfield.  McKernon’s free-kick from wide on the left was headed clear to the outskirts of the box by Anson where Borris took a touch to set up Dale Moore for a shot from 25 yards that swerved high and wide of target. 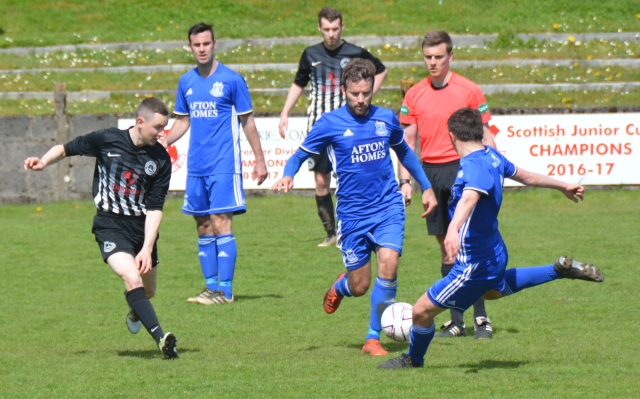 On 23 minutes Anson’s shoulder charge into the ribs of McChesney went unnoticed by the match official and to add insult to injury the Glens centre back was penalised as the striker crumbled to the ground. Job done, and a quick wink to the irate home support, Anson recovered to sprint(!) into the box for Del Esplin’s incoming free kick which popped out of a pack of players into the path of James Lundie and although time and space was in his favour the centre-back skewed his shot from 8 yards to earn Glens a throw-in.

A Cumnock throw-in on the right was headed on by Anson at the half-way line for Esplin to chase and switch play to Muir on the left. In a flash he picked out Mark McKenzie’s run into the box which tempted Brian McGarrity to advance from his line, and although the keeper tried to draw back from the tackle at the last-minute he caught the midfielder and a penalty kick awarded.  On 27 minutes Paul Burns, who had missed a spot-kick in the midweek game at Girvan, stepped up to drill a low shot to McGarrity’s right only for the keeper to push it round the post.  The resulting corner was whipped into the near post where Woods headed it down for Burns but his shot from inside the six yard box failed to find the target. 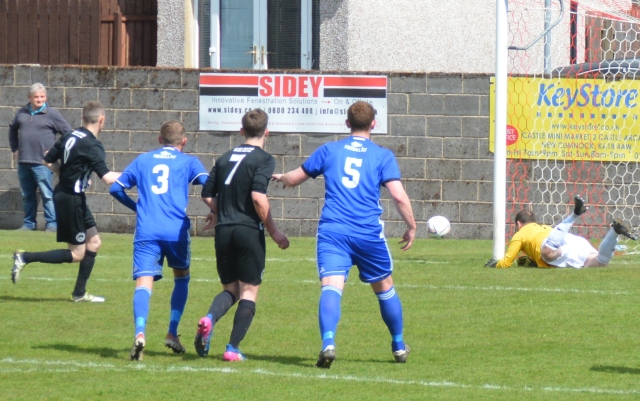 Cumnock continued to press and on 31 minutes they won a free-kick on the fringes of the penalty box but Burns must have felt it wasn’t going to be his day as his effort was well off target.

The closing third of the half (!) belonged to the home side in terms of half-chances.  McCann and Borris combined to set up Moore’s effort from 25 yards which dipped over the bar. Borris, again the architect, slipped the ball to Lynass on the right, who gave Murray the slip as he drove for the bye-line only for cut-back to be cut-out by the outstretched leg of the keeper. On 39 minutes, in what was the best move of the half, McAusland’s clearing header was gathered by Borris wide on the right before clipping the ball upfield for Lynass at the corner of the penalty box where he held off both centre backs to slip the ball to McCann who in turn picked out the incoming Moore only for th midfielder’s shot from seven yards to drift inches wide of the post.

Lynass then earned the Glens their first corner kick but, of all people, it was Burns that won the aerial header to clear McKernon’s kick. The home side quickly retrieved the ball and Borris burst into the left-hand-side of the penalty box, driving through the space between Burns and Lundie to reach edge of the six-yard box from where his shot at goal was blocked by the feet of the keeper and deflected to safety. 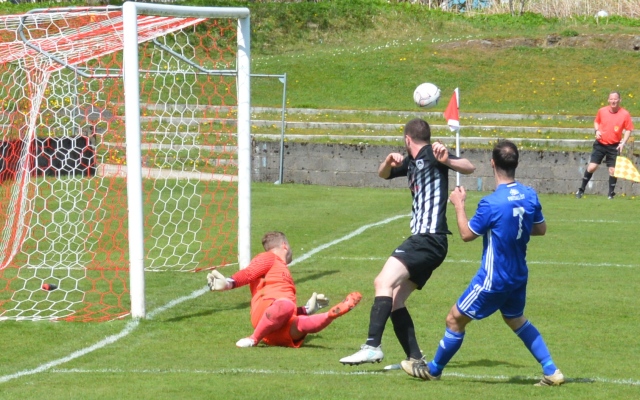 Cumnock were first to show after the break winning back-to-back corner kicks without threatening the Glens goal. Woods had taken a knock in the process and after failing to recover was replaced by Jamie Ballantyne on 50 minutes.

Andrew chased a ball down in the Cumnock box forcing Lundie to clear at the expense of a corner. McKernon’s delivery from the left never got beyond front man Burns but Cairns quickly recovered the ball and floated it to the far side of the box where McAusland’s header was headed clear by Anson only to be snapped up by Moore who whipped a wicked ball to the back post where although McCann got a head to it, he couldn’t guide the ball on target. 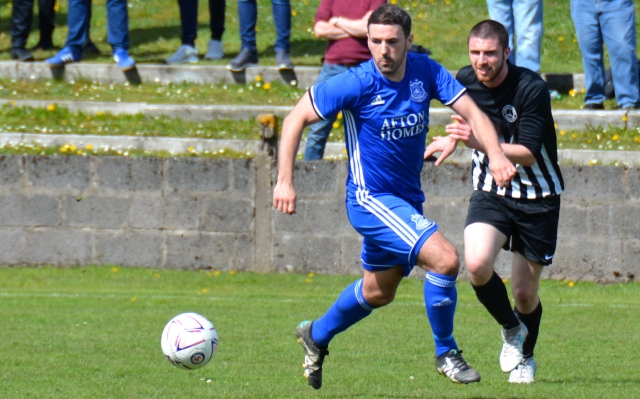 Joe Andrew on the move

On 57 minutes Glens brought on Cameron Marlow for Conor Lynass, with Marlow taking up a place in the middle of the park with Moore filling the placed vacated by Lynass.

McChesney, wide on the left from the half way line, launched a free-kick high into the box which was gathered by keeper Johnson to launch a counter-attack upfield.

Anson beat Menzies to the ball to progress down the left and cut the ball across the face of goal for the incoming Paul Burns to fire home at the back post. Cumnock 1-0 up with 61 minutes gone. 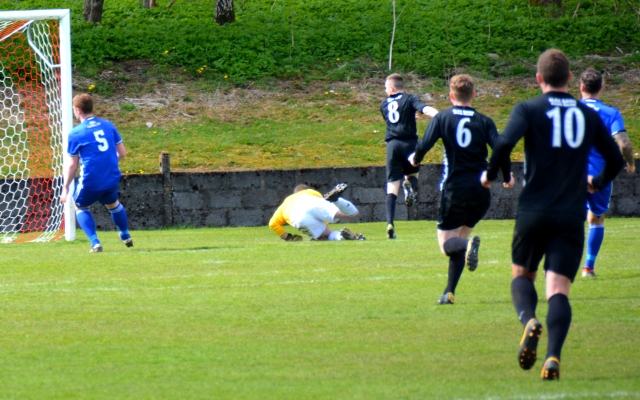 Glens brought on Chris Dallas for Mick McCann as the home side went in search of an equaliser. McKernon’s free kick from the half way line initiated a scramble in the box that saw both sides surrender possession before the ball fell for Andrew to turn Lundie in the box but his low shot lacked the power to test the keeper who got down low to hold the ball.

Around 70 minutes both sides made substitutions with Cumnock bringing on Jamie Martin for Mark McKenzie and Glenafton replacing Ryan Borris with Darren McGill.

Burns through ball set up Anson to beat the offside trap but he fluffed his shot which only just reached the hands of McGarrity.

On 74 minutes Cameron Marlow was shown a red card for words said after another decision by the match official had left the home side and their support bewildered.  Two minutes later Moore was cynically hacked down from behind by Stephen McKenna in front of the referee and after the advantage came to nothing,  the referee chose to show the offender a yellow card.

McAusland outjumped Crawford to head the ball on for Dallas and although the stiker got between the two centre halves to get his shot away it lacked the power to test Johnson, who mopped up the loose ball. 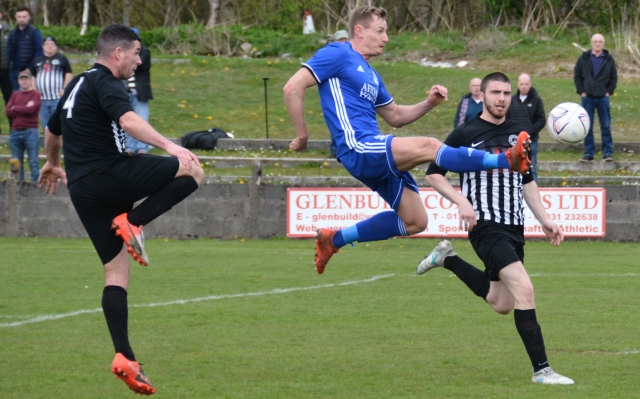 Martin had brought some fresh energy to Cumnock’s attack since his introduction and he weaved about the park with determination and style in equal measure. A mazy run was brought to an end with a robust tackle from McGill that earned the midfielder a yellow card.  The resulting free-kick was headed over the bar by Murray. Another run by the youngster was ended by McKernon and the flash of a yellow card with the free kick being cleared.

With 5 minutes to go Martin was on the move again and although he showed a clean pair of heels his shot at goal lacked their shine and the ball whizzed well wide of the post. Back came Martin wide on the right skipping past defenders like training cones and switched play to Anson on the left hand side of the box but his attempt to bring the overlapping Ballantyne into play ended with a woefully short pass that McAusland  cleared before being clattered by the Cumnock defender.

The 10 men got a second wind and pushed for an unlikely equaliser in added time. Moore looked to have won a header cleanly to send the ball into the box but with a squeal Esplin fell to the ground covering his eye which earned the visitors a free-kick and a breather – thankfully he never required any treatment and made a full recovery! On 92 minutes Anson was booked for kicking the ball away after the Glens had won a free-kick and once again Johnson, who had a flawless game, clutched the ball cleanly. 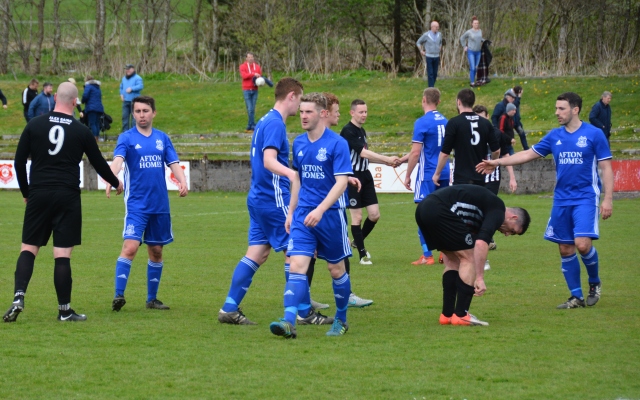