A minute’s silence was observed before kick-off in the memory of Jackie Scarlett who passed away last Saturday, aged 88 years old.  A well-known figure in Ayrshire Junior football he played a leading role in turning the fortunes of Whitletts Victoria around in the 1970s when the club seem destined to fold.  Of course he will also be remembered fo sponsoring the Ayrshire Sectional League Cup known as the Jackie Scarlett Cup in honour of his father of the same name.

Auchinleck Talbot were first footers at Loch Park in the first game of the New Year and were quickly on the front foot forcing back-to-back corner from attacks down both flanks.

Glens responded with a fine through ball from McCann for Chris Dallas to chase but the striker lost out to the alert Andy Leishman as the keeper raced 10 yards out of his box to boot the ball clear. Soon after the keeper got down low to cut out Dallas’s cross from wide on the right aimed for Ryan Borris in the six-yard box. 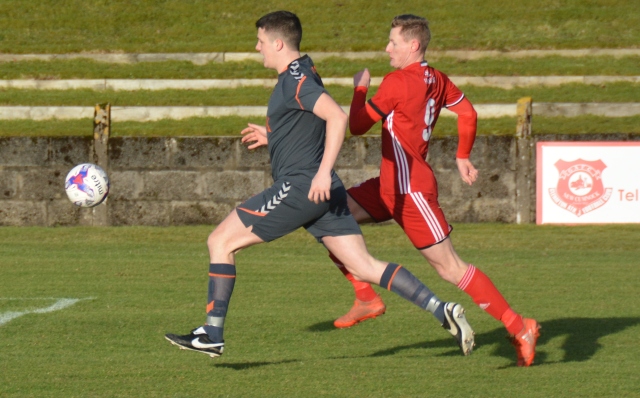 At the other end Stephen Wilson’s fine run down the right flank saw him progress to the bye-line only for his cut-back for brother Graham to be  cleared by Craig Menzies at the near post. The visitors recovered the ball and play switched to the left where former Glenafton U19’s player Klark Thomson gathered the ball and engineered an angled shot at goal that was well held by Brian McGarrity. The keeper also made light work of a close- range header by Graham Wilson from another Jamie Glasgow cross.

Although play continued to ebb and flow, albeit interrupted by niggly fouls from both sides, clear cut chances were thinner on the ground than the layer of Loch Park frost that had melted away in the January sunshine as defences were well on top.

On 20 minutes Jamie McKernon broke down another Talbot attack deep in his own half and picked out Borris who quickly found Davie Gray who gave a clutch of Talbot midfielders the slip before threading a ball through the middle destined for McCann’s run into the box only for defender Neil McPherson to intercept in the nick of time. 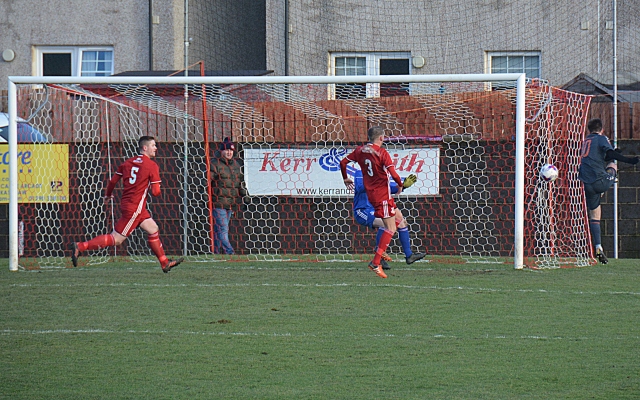 The visitors counter-attack came within a whisker of breaking the deadlock after Graham Wilson broke down the left and floated a killer cross to the back post where Glasgow leapt of one foot to guide the ball with the other past McGarrity covering the near post only for it to hit off the knee of Ryan McChesney and roll along the goal line to be gathered by the keeper re-emerging from the back of the net.

Brian McGarrity stops the ball in the line

Back came Glens and their pressure resulted in another couple of free kicks in good positions one of which on 24 minutes earned a yellow card for Gordon Pope. Gray’s chip into the box was only partially cleared and snapped up by Borris to return the ball into the busy box to be headed on by McCann and Gray to meet the ball on the drop and fire his shot into the side-netting.

Five minutes later Gray’s free-kick from just inside the Talbot half was won in the air by McChesney but his header drifted wide of the post which was well covered by Leishman in any case. Five minutes after that the keeper must have had a flashback to the Scottish Junior Cup Final in June when defender Alan Cairns opted to shoot from 35 yards out however on his occasion the ball sailed over the bar.

On 39 minutes Kyle McAusland breaking down the right joined Pope in the book after a tussle with the Talbot defender. Leishman launched the free-kick upfield and the ball eventually fell for Graham Wilson in the box and with Ally Park closing him down he slipped the ball to brother Stephen to shoot from 12 yards but McChesney got in a great block. McKernon picked up the loose ball and released Borris to break forward and feed McCann to edge into the box with Dallas support only for McPherson to time his tackle perfectly and steal the ball. 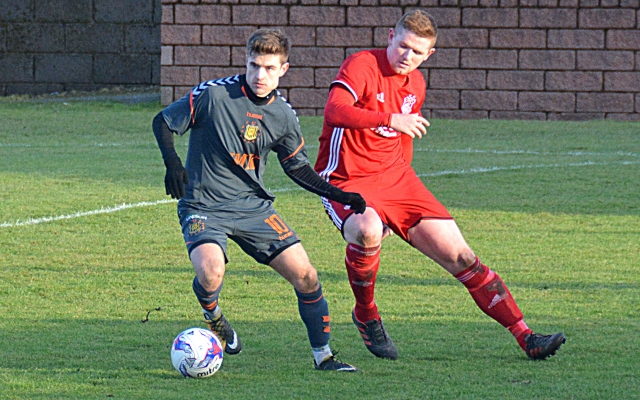 Menzies broke up Talbot’s counter on the half-way line and then with the ball glued to his feet forged his way forward through the outer lines of defence before clipping the ball into the box for McCann to chase but by time he forced the save from Leishman the offside flag had been raised. In the last action of the half Menzies was back at the heart of the defence to mop up a free-kick floated into the Glens box.

The pattern of the second half soon mimicked that of the first with play moving from end to end. Glasgow on the right picked out Graham Wilson but his powerful header, which  pulled off a point-blank save from McGarrity, was from a offside position.

McKernon’s peach of a pass, through the middle, enabled Dallas to get the jump on Ross Harvey 10 yards inside the Talbot half and head for the Talbot box.  With the defender hot on his heels and Leishman advancing to the edge of his six-yard box the striker scooped his shot from 12 yards out over Leishman standing tall and over the bar.

At the other end on 53 minutes Stephen Wilson from the right picked out Dwayne Hyslop in the box but his shot lacked power to test McGarrity. From the half way line Pope lofted a perfectly weighted ball over the Glens defence for Graham Wilson to gather and tee up a shot at goal only for Cairns to execute a well-timed block.

On 57 minutes the Glens reshuffled the midfield with Dale Moore and Darren McGill replacing Ryan Borris and Davie Gray. Five minutes later Talbot made a change up front with Graham Wilson making way for Sean McIlroy.

Back to the action and White weaved his way deep into the left hand-side of the box and from within a pocket of Glens defenders managed to manufacture a low angled shot that saw McGarrity drop to his knees to  gather the ball at the base of the near post. 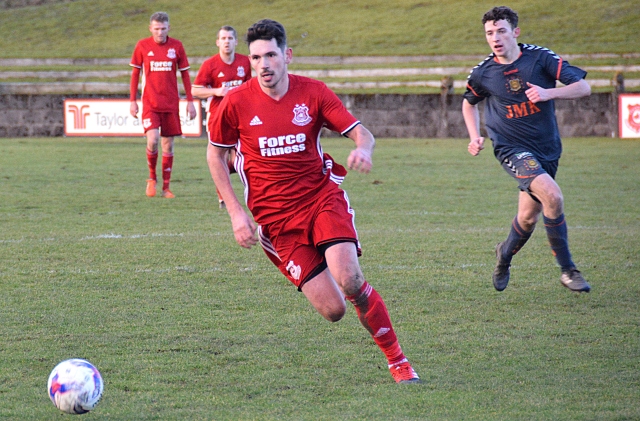 Back came Glens and  when there was no way through a packed box for Dallas he slipped the ball to Moore wide on the right to whip a vicious ball across the face of goal that Leishman managed to punch away at the back post and then block McGill’s attempt to drive home the loose ball. Another good run from Moore ended on the edge of box with a timely tackle from Pope.

The visitors then enjoyed a good spell of pressure with a couple of corner kicks that came to nothing.

Controversy on 74 minutes when Harvey grabbed a fistful of the back of Dallas’s shirt in the box. The defender earned a yellow card but was very fortunate a spot kick didn’t follow as the referee placed the ball a good two yards outside the box for the free-kick which was blasted into the wall and cleared. 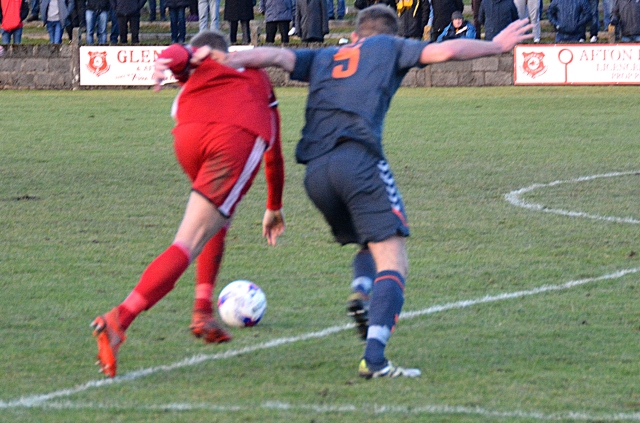 Ross Harvey and Chris Dallas in the box

Two minutes later Talbot brought on Mark Shankland for Klark Thomson who can be pleased with his performance on his return to Loch Park.

On 80 minutes McPherson’s headed clearance from a McAusland cross into the box fell for Park on the 18-yard line and the former Talbot midfielder struck the ball swift and sweetly sending it whistling inches wide of the post with Leishman late to see it.

Talbot countered through Glasgow slipping the ball to Shankland on the outskirts of the box and although he curled his shot past McAusland it lacked the direction and power to threaten McGarrity.

McGill wide on the left lofted the ball deep into the Talbot where Moore darted into the space between Pope and Harvey to stretch out a leg only to guide the ball away from goal much to the relief Leishman. 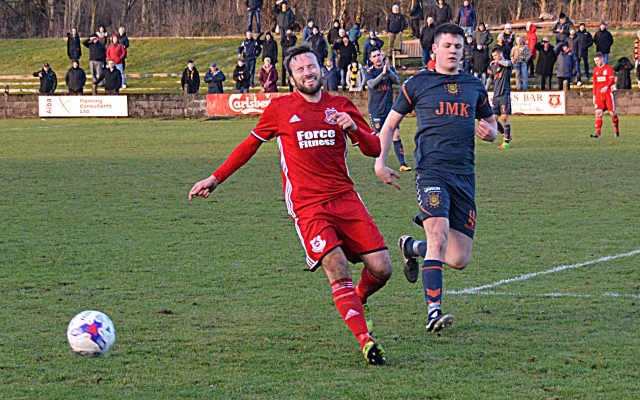 Shankland snapped up Glasgow’s header in the box but was forced wide by McAusland before whipping the ball to the back post where it was headed clear by Cairns. Pope then picked out Hyslop in the box but with McChesney and Park between him and goal he turned and scooped his shot over the bar.

Although play continued to flow back and forth Talbot’s attacks had a more menacing edge. On 80 minutes Stephen Wilson switched play from the right to Shankland on the left hand and Menzies slid in to cut out his cross as Talbot players flooded into the box. McAusland headed the resulting corner-kick out of the box and Harvey gathered it on the right to float a great cross to the back post where Hyslop headed it across the face of goal and McIlroy seemed certain to bulge the net with a close range header only for Park to head the ball off the line. 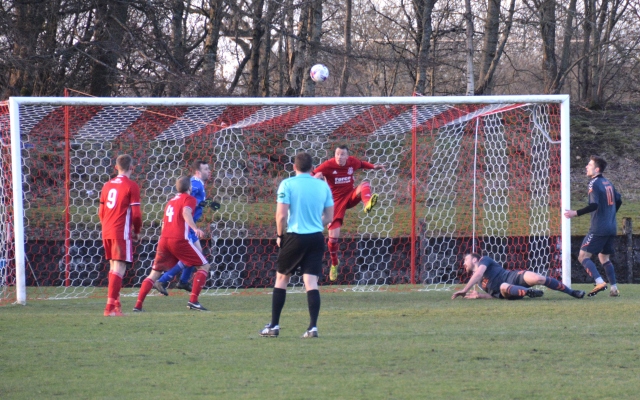 Ally Park clears off the line

The visitors pressure finally paid off two minutes when Dwayne Hyslop headed home Pope pinpoint cross from the left to the back post. 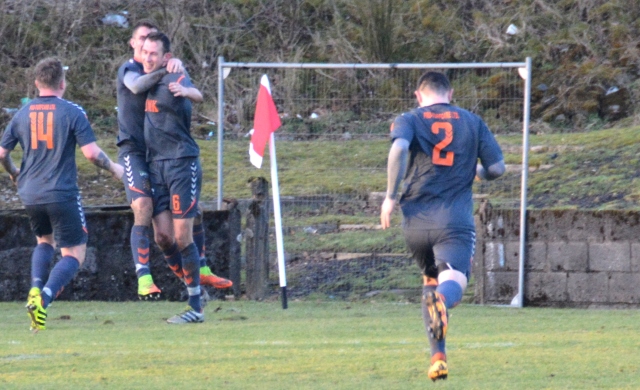 On 90 minutes Glens won their first corner kick of the match, after Pope’s tackle robbed Moore of the ball deep in the box, which Leishman clutched cleanly out of the air.

Three minutes of added time came and went and the game finished with a 1-0 scoreline as had the two other meetings between the sided this season.