The visitors opened the scoring on 6 minutes after keeper Robbi Wilson lost control of the ball from a corner kick and John Carter was well placed to force the loose ball home from 3 yards out. The keeper’s claims of being impeded fell on deaf ears. 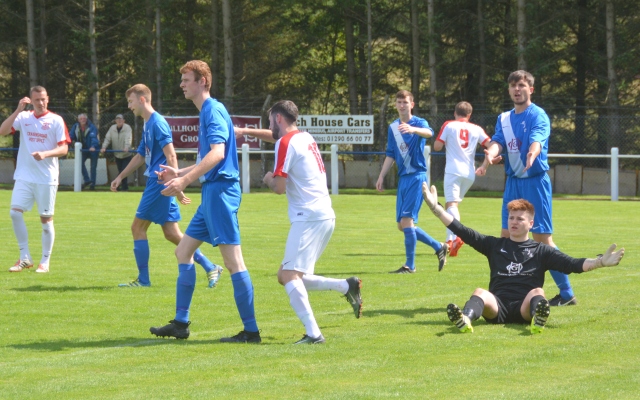 Wilson made a couple of good saves as Glens pressed, first from a Cameron Marlow ball whipped across the face of the goal and then a Ryan McChesney’s shot from deep in the box before his luck deserted him again and he was replaced on 30 minutes by Jordan Platt.

Muirkirk were very much in the game and on 40 minutes Ross Ballantyne broke forward and slipped a pass to Shaun Murtagh on his left to drive into the box and thump a lot angled shot that was saved well by a strong hand from Watson.

Three minutes later Ballantyne gave the Glens defence the slip to set up a free shot at goal from goal only to be denied by a super save from Watson to turn the ball round the post. The Glens keeper could do little from stopping the hosts equalising from the resulting corner kick as striker Graeme Condon leapt to loop a well placed header into the net.

Glenafton quickly regained the lead four minutes after the break. Mick McCann’s looping header was heading for the back post before Platt did well to push the ball over the bar. David Gray’s corner kick was picked up by McCann who rolled it back for John Carter to drill the ball from 8 yards out through a ruck of players and into the roof of the net.

The home side almost hit back immediately from  corner kick that fell to Ballantyne who did well to engineer a shot at goal only for it to be blocked by Kyle McAusland. Soon after a header at the back post dropped just over the bar with the Watson’s beaten. The Glens began to take control and chances were coming thick and fast. Marlow’s close range header sailed over the bar and on 63 minutes Moore and McCann combined to set up the midfielder to break into the box to shoot from 6 yards only for Platt to pull of a point blank.

Midway through the half the visitors brought on Chris Dallas and Jamie McKernon for Mick McCann and David Gray as they tried to shake off a stubborn Muirkirk; again still very much in the game at 2-1. Platt got the better of Marlow again blocking his shot from 12 yards out and snapping up the loose ball. On 84 minutes a delicate chip from McKernon released Carter to run to the bye-line and cut the ball across the face of goal beyond the keeper’s reach only for Dallas to clip the ball wide of the post. A couple of other chances came and went for the striker before McChesney’s header was pushed wide for a corner kick. McKernon’s delivery was met by the dipping head of McAusland to bullet the ball home (and survive a kick in the head by team-mate McKnight!) to double the Glens lead on 88 minutes.