Glenafton hosted Shettleston for the first league meeting between the two sides at Loch Park in what was their first home match since 7th November last year. The home side made a couple of changes from the starting eleven that faced Rob Roy back in January with David Gray, making his first start for the club, and Darren McGill taking the places of Dan Orsi (badly injured at Rob Roy) and Jamie Hay. Meanwhile on the bench was mid-week signing Chris Dallas.

It was Gray on 4 minutes that had the first pop at goal after running on to a neat flick from Joe Andrew before firing from the edge of the box and keeper Bryn Halliwell making a clean save. The visitors soon settled and Robert Campbell and Scott Anson were proving to be handful in more ways one and both went on to put a tremendous shift for the Town.

On 10 minutes Chris McCormack’s floated free-kick deep into the box was punched clear from the head of Reece McGillon by keeper Brian McGarrity. Miguel Blanco then released Campbell down the right to cut inside and attempt to curl an effort for the top corner only for Ryan McChesney to head clear and although Anson picked the loose ball his attempt to round the outrushing McGarrity was quickly snuffed out by the alert keeper.

The home side made the breakthrough on 17 minutes after a neat pass from Andrew took McCormack out and gave Darren McGill the jump on Ryan France to run into the box and from 12 yards out slot the ball low and hard beyond the reach of advancing keeper and into the net.

Spurred on by the goal the Glens pressed for a second and enjoyed a good spell of pressure beginning with Andrew giving Reon Juskowiak the slip in the box and forcing a shot at the near post which was held well by Halliwell. Both sides lined up to face a McGill free-kick from wide on the right but there was to be no aerial contest as the Glens midfielder went for goal instead and was unlucky to see the ball go inches wide of the far post. Gray and John Paul Boyle then combined to find Andrew in the box and his turn and shot was foiled by another save at the near post. Soon after Craig Menzies, on the overlap, picked out Andrew and another quick turn in the box ended with his thunder strike being too hot to handle for the keeper and ball booming off his chest before being cleared up. Meanwhile at the other end McGarrity was comfortably dealing with cross balls into the box as the visitors struggled to turn their possession into half-chances. 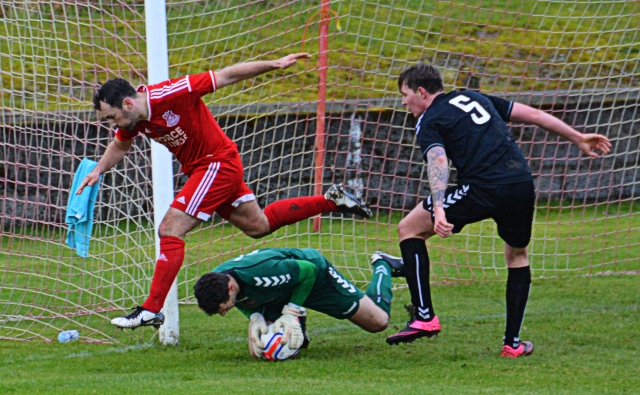 On 33 minutes Gray quickly gathered his corner-kick that had been partially cleared and whipped the ball back into the goal mouth where it was headed clear by Anson only to be gathered by the Glens midfielder again. He hooked the ball high over the bank of defenders for Boyle to cut it across the face of goal where Halliwell pounced on it at the near post as Andrew threatened.

Having weathered the storm Town struck back and drew level on 36 minutes. Anson held up the ball well before it found its way to Miguel Blanco who had cleverly found space and time in the box to pick his spot from 8 yards out to lash the ball home.

Miguel Blanco picks his spot for the equaliser

The Glens tried to respond through McGill only for his run to be broken by a bank of black shirts and the ball cleared upfield for Anson to chase with McChesney at his heels. Both players collided at the edge of the box and the ball fell kindly for McGarrity to gather. Back up the park and his counterpart clutched Craig McGuffie’s shot from the edge of the box. The young Glens midfielder then gathered the ball deep in his own half and side stepped McCormack’s crude lunge to accelerate upfield and then hurdle Frances mistimed tackle before skipping past another defender and whipping the ball to the near post where Halliwell bravely punched it clear of Andrew’s head.

Gray’s free-kick into the box was cleared for a corner-kick which in turn was quickly cleared up the park only for Juskowiak lung-bursting run to be ended up by the back-tracking McGill. In the last play of the half Campbell, now switched to the left flank, shook off a couple of defenders before his cross into the danger area was cleanly clutched by McGarrity.

Glens began the new half brightly and after making good progress down the left Boyle cut inside to square the ball for Ally Park to thunder a shot from 20 yards and although Halliwell couldn’t hold the ball he snapped it up at the second attempt. The visitors broke upfield and earned a corner which was snuffed out by Menzies and McGarrity and the scene was set for a high tempo second half with play pulsating back and forth. 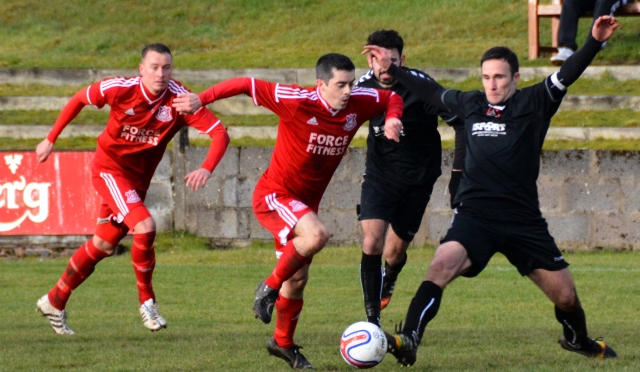 John Paul Boyle on the move with Ally Park in support

Boyle fashioned another mazy run before his shot from the edge of the box was blocked. On 50 minutes Gray trapped in a pocket of Town players clipped a fine ball down the right for McGuffie to collect and slalom his way beyond McGillon and Frances on his way to the near post where Halliwell, now on his knees, pulled off a fine block before snatching the loose ball. 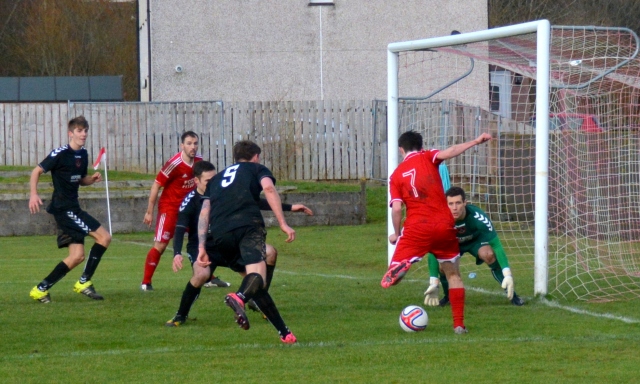 Campbell latched on to the keeper’s punt up the park to cut in from the left flank and as defenders closed in fired an angled shot that McGarrity finger-tipped past the post before pulling another fine save from the resultant corner-kick. McGill earned the home side a corner-kick but again the set play failed to test the keeper and was headed by well clear by Juskowiak. Soon after another Glens corner kick came and went.

As the hour mark approached Campbell and Anson combined down the left flank to hold of a clutch of red shirts before picking out Blanco in a crowded box and although he did well to engineer a shot at goal, McGarrity was his match with another fine save at full stretch to guide the ball wide. McChesney headed the corner kick clear from the near post only for the ball to fall for Campbell at the edge of the box but under pressure from the outrushing Gray he ballooned his shot high over the bar.

Finger-tip save from Brian McGarrity

After repelling a couple of Glens attacks the Town broke free up the right and the ball whipped across the face of goal threading itself between McGarrity and Chris Meikle at the near post only for the incoming Anson’s slide to get a stud to the ball (and a certain goal) fall inches short. The visitors brought on the fresh legs of Paul Martin for McGuigan.

The Glens pressed and McGuffie’s run and shot from outside of the box was blocked. McGill’s forceful run through the middle was brought to an abrupt ending by another piece of stout defending by McGillon. Boyle picked up the loose ball and fed the overlapping Menzies only for his cut-back from the dead ball line to be blocked by the Trojan Campbell and the resultant corner cleared by a resolute defence. Another jinky run by McGuffie was well underway before concluding in a sandwich between Jordan Dalzell and Chris McCormack; the latter’s barge enough to earn him a second yellow card and a lonely walk to the pavilion. Shettleston reshuffled the pack and Keigan Parker gave way to Daniel Boyle.

The home side continued to force the game and Meikle after dispossessing Dalzell at the edge of the Glens box embarked on a determined run that took him the length of the park and into Town’s box only for McGillon, his opposite number, to prevent the pass to Andrew. On 73 minutes the home side replaced McGill and Andrew with Chris Dallas and Mick Mcann and the latter almost made an instant impact as he got on the end of a free-kick clipped into the box only for his first time volley to scream over the bar. Dallas’s pace then saw him burst into the box and a sliding tackle from Frances secured another Glens corner-kick which was quickly cleared from the box and eventually fell for McChesney and his long range effort sailed over the bar.

The visitors made their final substitution with Dalzell making way for Brian McEwan. Ten minutes from time while the Glens were disputing the award of a throw-in the Town took the throw and the ball eventually gathered by Reon Juskowiak who embarked on a long lonely diagonal run seemingly heading for the far corner post but with Alan Cairns and the chasing McGuffie now closing in at the corner of the penalty box he cut the ball across the goalmouth and incredibly it found its way unimpeded into the far corner of the net. 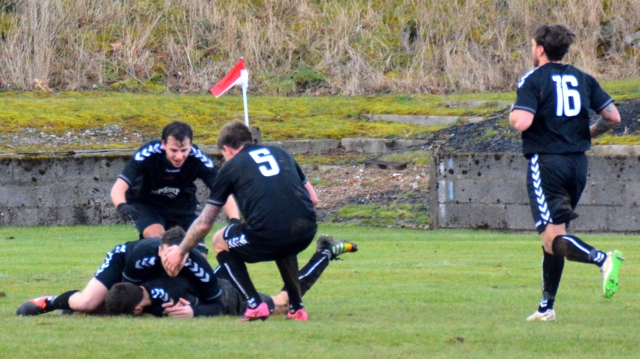 A minute later Shettleston could have doubled their lead after an excellent run down the right by Martin and a peach of a pass for Anson who initially gave Menzies the slip before teeing up his shot only for the Glens captain to get a goal saving block and deflect the ball wide while McGarrity plucked the resultant corner-kick out the air.

In the closing minute Gray’s low drilled shot was held at the second attempt by Halliwell and the last chance of the game fell to McChesney who did well to chest down a free kick floated into the box only for his follow up volley to sail over the bar.

So the Glens excellent record of six consecutive wins , including five league wins, comes to an end. The players and management are to be congratulated on such a fine run in such a tight league and its onwards now to another difficult game next week.