Posted on September 5, 2015 by flowgently

Glens made several changes from the side that lost to Rob Roy last week with Jamie Hay and Ally Park out injured and Darren McGill taking a place in the bench in came Craig Potter, Joe Andrew and Daniel Orsi on his return from holiday.

The visitors earned an early free kick which was whipped to the back post where Chris Malone’s attempt to convert was thwarted by keeper Steven McNeil rising high in the air to clutch the ball safely, the Glens midfielder catching a sore one in the process.

Petershill countered and despite a number of opportunities to clear the lines the Glens defence conceded free kick on the outskirts of the box. Keiran McAnespie curled the ball ;past the wall to beat keeper Brian McGarrity at his near post and put the home side ahead after 8 minutes.

Michael Daly made good progress down the right and his tussle to retain the ball in the right hand side of box ended up with it popping up wide on the left where McAnespie’s angled shot slipped wide of target.

On 20 minutes the visitors had the ball in the net. Chris Malone picked out Joe Andrew and having shrugged off a shirt pull Chris Ketterer slipped the ball to Mick McCann who appeared to have the jump on the static Jordon Chisholm on the 18 yard line and run on to slot the ball beyond McNeil, only for the assistant’s flag to deny the score. 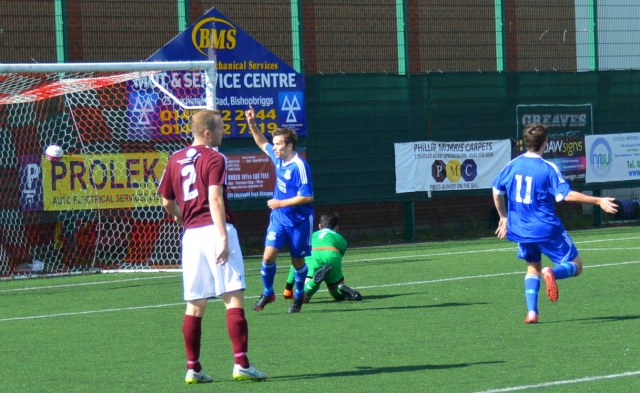 McGarrity easily mopped up a couple of Peasy cross balls into the box before his counterpart got down low to hold a low shot from Craig McGuffie at the end of another fine run from the young midfielder. The home side looked like doubling their lead on 26 minutes after Jordon Kennedy’s close range shot was initially blocked by Malone and the ball fell kindly for him to blast his second bite at the cherry unimpeded only for McGarrity to pull off a marvellous block and the Glens defence repel the corner kick that followed.

At the other end McGuffie and Malone combined well on the left side of the box before the latter whipped the ball to the back post only for Daniel Orsi’s header to loop over the bar. Soon after Orsi’s ball into the box took a bad bounce off Ketterrer and as Malone picked up the loose ball and prepared to fire he stumbled to the ground after a clash with Tony Stevenson. Penalty claims were waved away and the Glens man booked for his trouble.
Five minutes later the same fate befell Kieran Daw after being robbed of the ball in the ball by Ryan McChesney, his tumble earning him a yellow card.

Craig McGuffie on the move

In the closing minutes of the half Peasy passed up two good chances to add to their lead. Darren McLean with time and space in the box sent his angled shot high and wide beyond McGarrity’s goal and then Daw preferred power to placing from close range and the Glens keeper pulled off another fine block.

Glenafton kicked off and within a minute were back on level terms. Jamie McGeoghegan threaded a super ball for Craig McGuffie to gather, beat the offside trap and make a bee-line for the box with defender Fraser Chisholm struggling to close the gap on his prey. McNeil had little option to charge from his line and although he blocked McGuffie’s shot from the box the ball shot into the air and with his back to goal the he hooked it high over keeper and back-tracking defender and into the gaping net. 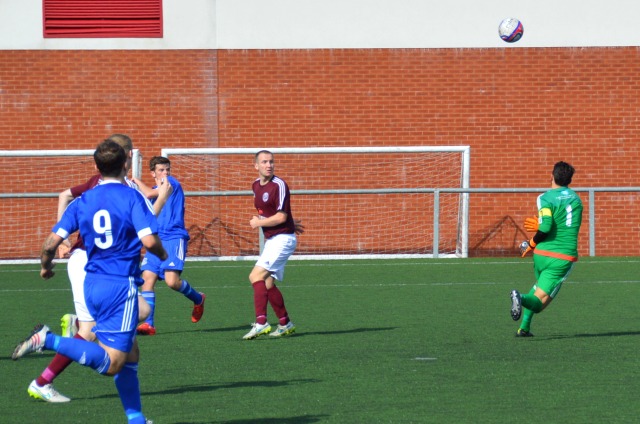 With their tails up the visitors began press for a second with McGeoghegan much more prominent in supporting the attacks down the right while Potter was doing a fine job in spoiling any counter-attacks by the home side. Malone’s effort from distance sailed over the bar and the Peasy defence stood firm to clear a Glens corner as Andrew and McChesney challenged.

Just before the hour mark McChesney landed awkwardly after bringing McLean’s run down the right to an end and was replaced by Chris Meikle. The Glens were soon back on the front foot and Malone played a cute one-two with Andrew to progress into the box and although his strike was on target McNeil held comfortably. While at the other end McGarrity had to be brave to dive at the feet at Daw.

Midway through the half McGuffie jinked his way through the middle into the box only for his shot to be deflected over the bar by the timely tackle by Peter Bradley. The resultant corner came within a whisker of finding McGuffie’s head but the ball grazed off Chisholm’s head instead and the corner that followed was eventually cleared.

Both sides made changes with the visitors bringing on Darren McGill for Daniel Orsi and soon after John Paul Boyle for Mick McCann while the Peasy brought on Gavin Stokes for Darren McLean.

McGill turned a couple of defenders at the corner of the box to slip the ball to Andrew and his low drilled angled shot was well blocked by McNeil’s outstretched leg. On 78 minutes a Peasy free kick from the left was chested down deep into the six yard box by Stevenson for Daw to pounce only for McGarrity to pull out a magnificent save with an outstretched arm.

The visitors countered with McGill’s run down the left and before picking out Boyle and his attempt roll the ball back for Andrew was intercepted in the nick of time by Ketterer.
With 10 minutes to go the home side almost regain their after Michael Daly did well to engineer a cracking shot from a tight angle to beat McGarrity only for the ball to smash off the post. Although both sides created a couple of half chances before the final whistle neither keeper was tested.