Holders Glenafton visited local rivals Auchinleck Talbot, in the third round of fixtures in this year’s Ardagh Glass Cup, and in what was a rerun of last year’s final at Portland Park.

The visitors made a bright start and deservedly went in front after 8 mins on the counter attack through midfielder Chris Malone. Following a blocked Talbot free-kick by Graeme Wilson, a long clearance found midfielder Craig McGuffie who held the ball up well before releasing former Talbot striker Mick McCann who picked out Darren McGill on the far side, a fine tackle by Boyd saw the ball break to Chris Malone on the edge of the box and on his weaker right foot and on the slide curled the ball past Leishman.

Glens continued to be on the front foot with wide midfielders McGill and McGuffie causing Talbot all sorts of problems. They were unlucky not to add a second shortly afterwards, following trickery from McGuffie in the middle of the park a fine pass released McCann through on goal however the Talbot goalkeeper was quickly off his line to turn the ball behind for a corner.

A smart interchange involving Talbot’s Milliken, Wilson and Young saw the home side create their first chance of the goal, however Boyd fired wildly over on the half volley from just inside the box. The home side equalised shortly before half time when a long Gordon Pope free-kick picked out an unmarked Dwayne Hislop, and his looping header from the edge of the penalty box went high into the roof of the net, despite the best efforts of keeper Brian McGarrity. H/T Auchinleck 1 Glenafton 1

In an entertaining and end to end second half, Talbot were the first team to threaten, following another free kick by Pope, the ball broke loose to centre half Campbell, however his close range shot was too close to McGarrity who held on well. Glens continued to create half chances with two long range shots from Malone being well held by Leishman, and on the counter attack a McGuffie cross found the head of McCann however his header drifted well wide.

Shortly aftwerwards it was Talbot that came closest to scoring when a long ball was knocked into the path of Milliken, and from inside the box his powerful right foot shot smashed against the edge of the post and out of danger. The home side had looked dangerous at set pieces all game and threatened once more when a floated corner found the head of powerful centre half Campbell, however his header went over the bar. McGarrity then again had to look likely to save an improvised acrobatic effort by Talbot striker Graeme Wilson. Talbot eventually went in front through striker Graeme Wilson. A quick free pick by Pope seemed to take the Glens defence by surprise, and a low cross found the unmarked Wilson, who slotted the ball home. 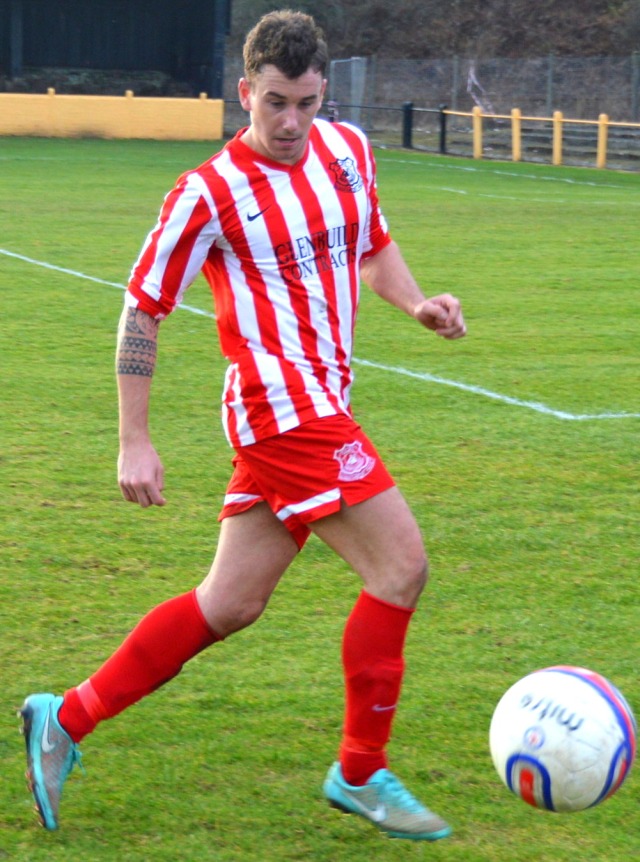 Glens brought on John Paul Boyle and Dan Orsi in place of McGill and McGuffie and the substitutes combined well to bring the visitors level with five minutes left to play. A great pass from ex Talbot player Ally Park released Boyle in the box and his low driven cross landed at the feet of Dan Orsi who fired the ball past Leishman from close range to the delight of the visiting support.

Both teams tried to no avail to find a winner late on however Boyd’s header was straight at McGarrity and centre half McChesney’s glancing header from a well worked free kick drifted closely past.