Last season’s Scottish Junior Cup finalists Glenafton fell at the 3rd round to Kirkintilloch Rob Roy who although had went in at the break a goal down overran their Premier Division opponents with a scintillating second half display that saw them scoring two goals within a host of chances.

With play-maker Jamie McKernon unavailable for selection Michael Wardrope made a return to Glenafton’s midfield which was bolstered with striker Aaron Connolly falling back to play wide on the right with Alain Kinney on his own up front.

The visitors were first to threaten after Alan Cairns combined well with Adam Strachan down the left before whipping the ball into the goal mouth where Kinney’s header was blocked by Martin Brogan. Glens were enjoying the better of possession but chances were thin on the soft ground before Aaron Connolly’s angled shot from the right side of the box was diverted behind by Dan McKenzie for a corner kick. Connolly’s kick was headed clear to the edge of the box where it was met by Cameron Marlow and lashed for goal, taking a wicked deflection before nestling in the net and leaving keeper Johnnie Murdoch rooted to the spot to put the Glens ahead on 11 minutes.

Five minutes later Rabs first effort of note originated from a Gary McMenamin free-kick from the left flank and floated to the back post where Ryan McChesney was forced to concede a corner, which was quickly followed by another corner kick also cleared by McChesney. The visitors broke up-field where Marlow switched play to Strachan wide on the left to instantly release the overlapping Cairns for the full back to drive into the box and cut the ball across the face of goal, but just out the reach of the incoming Kinney and keeper Murdoch was relieved to watch it slip beyond his back post. 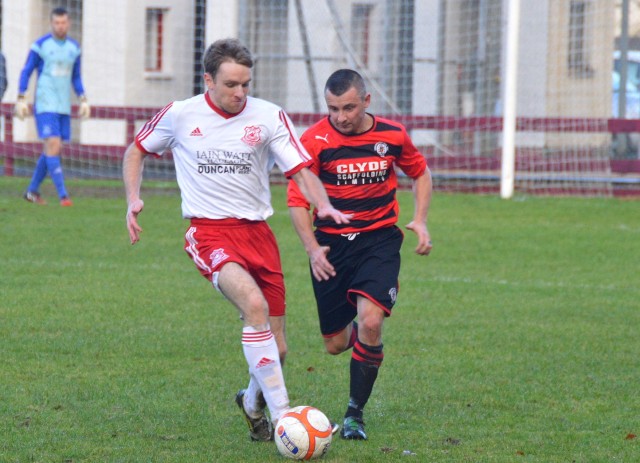 Glenafton with their goal advantage continued to hold the upper hand in a tense affair and were winning the majority of set pieces, none of which however resulted in the keeper being tested. Strachan and Connolly switched flanks for a spell and yet chances from open play were rare. 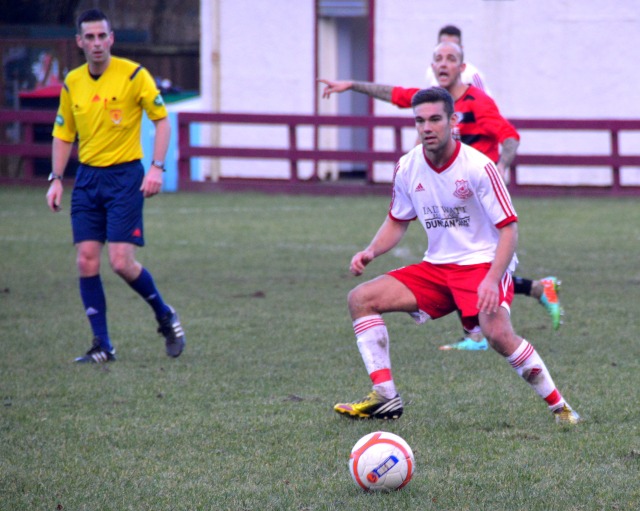 Chris Duff was involved in both the half chances the hosts fashioned. The first saw him fire wide of target from close range while under pressure from Connolly and the second, just before the break, ended with keeper Brian McGarrity snatching the ball from his feet.

The visitors forced an early corner which was cleanly clutched by Murdoch. Five minutes later the home side responded with a flurry of corners that increased in potency. The first headed past his own post by Craig Menzies, the second cleared off the line by Wardrope before Barr’s attempt to bury the rebound was deflected wide; the third headed from under the bar by Jamie McGeoghegan and the ball drilled back into a ruck of players by Chris Duff, where it struck a leg and looped over the head of McGarrity and into the net to level the tie on 54 minutes. 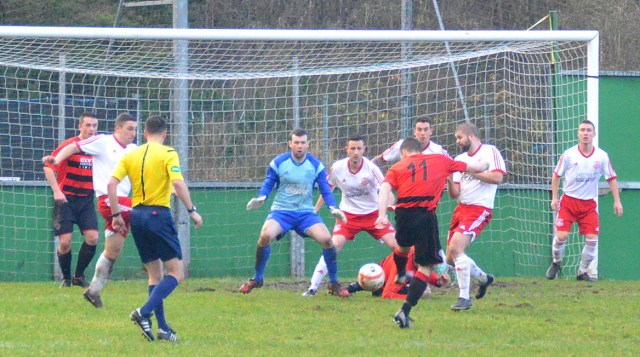 Chris Duff tees up the equaliser

The Rabs went on the rampage, aided by the Glens surrendering possession cheaply on numerous occasions, to create chance after chance. Duff set up Stephan Aitken only to be denied by a brave McGarrity diving at his feet and pushing the ball wide of target. Former Cumnock midfielder Garry McMenamin cracked a shot from 20 yards which McGarrity held well in difficult conditions. McChesney then made a great sliding tackle deep in the box to steal the ball from the feet of Aitken. Another defence splitting ball was gathered by Duff and with Dan Orsi close on his tail the striker was pushed wide but still managed to engineer a shot at goal which seemed net bound before McGarrity launched himself to somehow push the ball round the post. A minute later the keeper could nothing to prevent Scott Upton, in acres of space, from picking his spot and bullet a diving header from close range into the net to put the Rabs ahead with just over an hour gone. 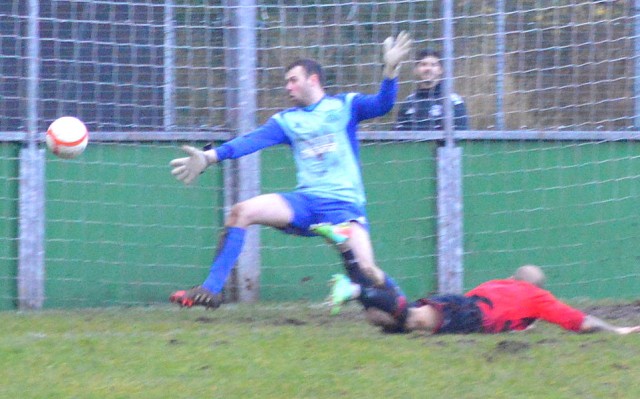 Shell-shocked Glens responded a minute later. Marlow gathered the ball in the box and warded off McKenzie and Brogan before firing for goal only for the advancing Murdoch to save well. Midway through the half Duff picked out McMenamin in the box and as the midfielder went to pull the trigger a brave sliding tackle from Cairns and mop up by McGarrity cleared the danger. Ryan Tiffney carved out another good chance only for his shot to sail wide of target.

Glens brought on young Klark Thomson for Orsi and soon after striker Patrick Walker for Cairns. The visitors earned a couple of free kicks and again struggled to make the most of them.

With 10 minutes to go Tiffney had a great chance to kill off the tie after being presented with a free run on goal but again McGarrity came to the rescue by rushing from his goal and forcing the striker to clip the ball narrowly over the bar. A life-line for the Glens and Strachan won a corner of the visitors only for it to be cleared at the near post by McMenamin. At the other end Tiffney fired a ferocious shot from the right hand side of the box only for the airborne McGarrity to pull off his save of the match by tipping the ball over the bar. 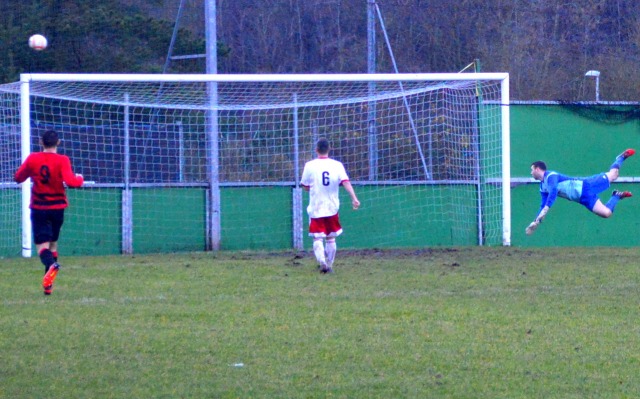 In the closing minutes Glens replaced Wardrope with Michael Reilly as visitors pressed for a late equaliser and it nearly came in the last minute of regulation time. Strachan’s cross from wide on the left was headed down by Barr and Walker’s attempt to drill the loose ball home from 10 yards was blocked by Carter. With the ball now spinning in the air and Thomson was first to react and the young midfielder somehow managed to turn on one foot and hook the ball goalward only for Murdoch to get down low and push the ball round the post. 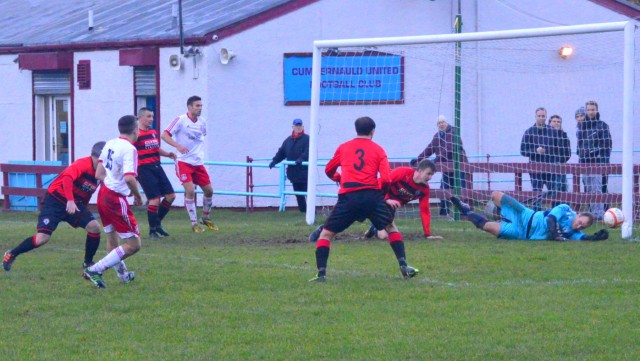 The resultant corner-kick was cleared up and a free-kick win soon after sailed after the bar. Fittingly the last chance fell to Rob Roy and substitute Dom O’Hallaran although his low angled shot beat man-of-the-match McGarrity it sneaked past the keeper’s far post. FT Rob Roy 2 Glens 1