Posted on December 7, 2013 by flowgently

Former Rabs team-mates Findlay Frye and Scott Adam made the return trip to Adamslie but only as spectators with the pair both out through injury. With Craig Menzies unavailable for selection defender Ryan McChesney wore the captain’s armband, a proud day for the New Cumnock youngster.  Wearing the Rabs’ captain’s armband was Gordon Moffat one of two former Glens players in the home side’s starting eleven; Kris Mitchell the other.

On 3 minutes Brian McGarrity made a clean clutch at the near post as the ball was fired in from the left flank. The home side continued to enjoy the bulk of the forward player in the opening 20 minutes albeit without seriously testing the Glens’ keeper again in that spell.

The visitors began to make some inroads but without any real fluency to their play and they seldom threatened keeper Gordon McPherson – a dive at the feet of Cameron Marlow on 21 minutes and gathering the ball from the head of Alain Kinney two minutes later his most challenging moments. 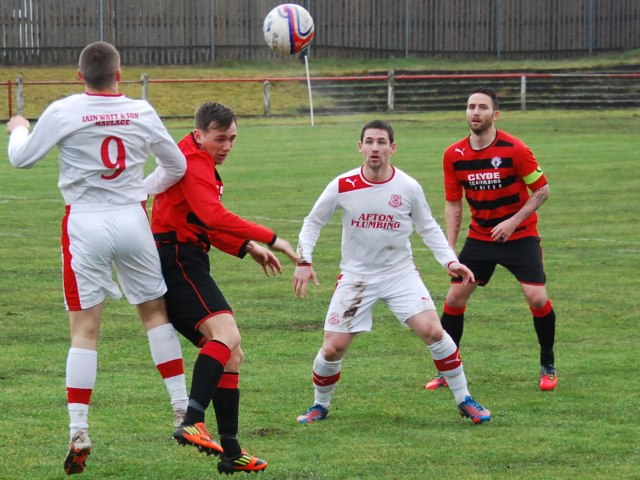 Rabs continued to look the more threatening and Craig McEwan made a crucial block on a Willie Sawyers drive and soon after the Glens defence stood solid as Alan Urquhart and Sawyers tried to pick their way through a packed penalty area. It proved to be a dress rehearsal for on 26 minutes a wonderful piece of passing play delivered the opening goal. Urquhart picked out Ryan Deas in the box who quickly squared for Sawyers and his subtle flicked released the incoming Urquhart in space and he duly picked his spot from a few yards out.

The Rabs turned the screw and in a three minute spell McChesney worked wonders to clear a Sawyers header off the line, the big striker then sent a free header from a corner kick wide of the post and Urquhart had the ball in the net again but from an offside position.

Glenafton rallied and ten minutes from the break they conjured up their best move of the half when Marlow and Connolly combined down the left before firing the ball into the near post where McPherson made a great block to deny Kinney a tap in.

Before the interval both sides forced a couple of corner-kicks a piece, all of which were duly mopped up by the respective defences.   The half ended in disappointment for goalscorer Alan Urquhart who appeared to twist a knee and was replaced at the break.

Glenafton introduced midweek signing Michael Reilly in place of David Dimilta and he was soon in the thick of the action with McPherson having to race from his line to clear the ball as the striker chased down a long ball into the box.

At the other end McChesney had to be on his toes to head a brace of corner kicks clear as Sawyers menaced with intent and then timed to perfection a tackle on Deas in the box. Another Rabs attack was frantically cleared and to some effect as the Glens broke up-field with a sense of purpose that had been missing in the opening half. Reilly released Connolly wide on the right who skipped past a clutch of defenders before whipping the ball across the face of the goal for the in-rushing Marlow only for McPherson to get a crucial finger-tip on the ball and then his outstretched arm cleared the resultant corner lick from the heads of Connolly and Reilly.

Play was now flowing from end-to-end and on 55 minutes a lightning quick break down the left ended with a Deas drive at goal being cleared by McGarrity and the ball rebound off a Rabs forward, deemed to be in an offside position, and into the net. Two minutes later the Glens suffered the same fate when a Marlow header crashed off the base of the post and Kinney netted the loose ball, but again the flag was raised aloft and the goal disallowed. Soon after Reilly, surrounded by three defenders, engineered a shot at goal from the six yard box only for McPherson to perform heroics again and get a foot to the ball to concede another corner, which again came to nothing – a common feature of the set-piece play of both sides on the day.

Further chances came and went at both ends.  The best of which for the respective sides saw McGarrity defy a posse of  Rabs hit men as they hunted down a telling cross from Mitchell and his counter-part McPherson get down low to push a powerful Reilly header wide of target.

In the dying moments of the game Craig McEwan earned a second yellow card to draw a disappointing day to conclusion for the visitors.