BOYLE TOO HOT TO HANDLE

Glenafton had the honour of travelling to Townhead to face Cumnock in the final game of their hosts’ Centenary season. In the visitors’ squad there were no fewer than seven former Cumnock players – Ally Semple, Craig Potter, Craig Menzies, Gareth Campbell, Gareth Armstrong, John Dempster, John Paul Boyle – and of course add to that tally Glens’ manager Darren Henderson. While in the Cumnock squad of the trio of former Glenafton players only keeper Chris Fahey was available for selection, with Willie Howie and Paul McInnes both missing.

Chances were few and far between in the first-half, indeed the better ones were fashioned at the beginning and end of the opening forty-five, as neither side could gain the upper hand. The visitors were first to show in six minutes when Paul McKenzie gathered the ball in the middle of the park and pushed forward before firing for goal from 22 yards and although Fahey failed to hold the ball, Chris Robertson was on hand to clear . From the resultant corner kick an unmarked Glen Mitchell from 8 yards out bulleted a net bound header but Gary McMenamin stood firm to head the ball of the line with Fahey beaten. 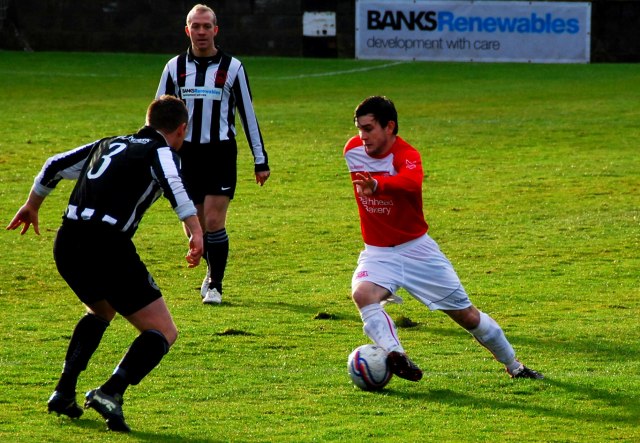 Five minutes from the break Craig Potter brought an excellent run by Sean Pierce to nn end at the expense of a corner kick. Robertson rose above all around in the six yard box and like his Glens’ counterpart his header appeared destined for the net only for keeper Ally Semple to instinctively get both hands to the ball and force it over the bar from point blank range. Two minutes later the home side should have taken the lead when John Bradford capitalised on a defensive slip that presented a free run in on goal but with the keeper to beat the striker uncharacteristically pulled his shot woefully wide of target. H/T Cumnock 0 Glens 0

Within a minute of the restart Bradford came close to making amends when he did well to get on the end of a ball whipped across the face of goal by his former Arthurlie team-mate John Johnson but just failed to guide it home. The scene was set for what proved to be a much more open game as both sides showed determination to break the deadlock, yielding a host of attacks and counter-attacks.

Glenafton gained the upper hand with Paul Murphy at times steam rolling his way through the middle of the park opening up options of McKenzie or Gareth Campbell on the flanks and John Dempster and JP Boyle up front. Campbell and Boyle combined well to drive into the box on the hour mark only for the latter to fire into the side netting.

Four minutes later the pair enjoyed greater reward. The irrepressible Campbell, thriving on his return to Townhead, had choices to make as he broke into the right hand side of the box with Fahey in front of him rushing from his line and Robertson to his left between him and the incoming Boyle.  As the two Cumnock men drew parallel some 10 yards from goal Campbell threaded the ball through the space between them for John Paul Boyle to collect only to lose his footing before regaining his composure, as David Smith closed in, and slot the ball into the gaping net.  Red-shirted and black-white shirted arms raised aloft in unison, one set in joy the other in desperation and hope for an offside flag that was never going to be raised, as JP and his team-mates raced to the away dugout in celebration.

On 71 minutes a magnificent ball from Murphy split the Cumnock defence to release Campbell in the box and on this occasion Fahey elected to stay on his line only to be left with ringing ears as the Glens’ man thunderbolt of a shot pinged off the outside of the metal upright.  Four minutes later the keeper did well to get down quick and low to his near post and hold McKenzie’s volley from the edge of the box.

With 13 minutes to go Cumnock were unlucky not to draw level when a corner kick played to the back post saw the ball drilled back into a packed six yard box by Richard Hanvey where another touch by substitute Scott Anson sent it net-bound only for Semple to get a strong hand to it on the goal-line before the ball was cleared. Three minutes later a McMenamin cut back from the left was brilliantly cleared by the outstanding Glen Mitchell as both Hanvey and Anson waited to pounce. Soon after, Ryan McChesney at full stretch prevented a fine ball from Bradford finding Anson deep in the box.

On 83 minutes a Cumnock free kick from close to the left hand corner flag was whipped across by McMenamin forcing Semple to rise and push the ball wide from under his bar. The resultant corner kick initiated another scramble in the six yard box with Semple, Campbell and Dempster standing firm to stave off the danger. In time added on another Cumnock corner was met by Bradford but his shot cannoned off the back of Potter to send the ball skyward and was met on its descent by the head of Danny Mitchell and then volleyed clear by McKenzie. At the death Potter did enough to block Johnson from testing Semple. F/T Cumnock 0 Glens 1