Glenafton secured their first league win of the season with a dominant display against Ashfield at Loch Park and extended their unbeaten run to four matches. In doing so they also claimed their first league victory over the Saracen Park side having drawn two and lost two of the previous encounters.

The scene was set as early as the second minute when the visitors’ central defence was left chasing the clean pair of heels shown by John Paul Boyle as he broke into the box. After rounding keeper Stephen Hall the Glens’ striker was left an impossible angle from which to score and there were no takers for his chip into the six yard box. Three minutes later Gareth Armstrong’s diving header from eight yards out was parried by Hall at full stretch and in a flash Boyle had nicked the loose ball, turned defender Jamie Coll, and delivered another telling cross into the danger area only for it to be cleared by Jamie Darroch.

On 11 minutes Ashfield showed their teeth when Paul Maxwell, who had bagged 5 goals in his previous two visits to Loch Park, got behind the Glens’ defence but his square ball across the face of the goal fell betwixt and between team-mates Willie Ferguson and Gary McCann and the chance was gone.

Back came Glenafton when Paul McKenzie released Craig Menzies down the right and his cut back from the dead ball line escaped the grasp of the grounded Hall and found Paul Murphy who hit a low drive from 15 yards out only for Darroch, with his keeper stranded,  to come to the rescue again. The home side’s pressure delivered the opening goal on 17 minutes after Armstrong with his back to goal and on the outskirts of the penalty area fended off the attention of Jim Smith to touch the ball into the path of Gus Cochrane who met it first time and cracked a left footer into the net from 20 yards out beyond the wrong-footed Hall.

Ashfield tried to strike back in double quick time but Maxwell and Ferguson lost the aerial battle as central defenders Glen Mitchell and Ryan McChesney snuffed out the danger before Craig Potter mopped up the loose ball. At the other end Murphy took time out from bossing the midfield to thunder a shot from 25 yards that flashed just wide of Hall’s post and minutes later he beat Mark Thompson to head the ball into the box where it was gathered by John Paul Boyle and then volleyed with venom beyond Hall at full stretch to double the home side’s lead with 24 minutes gone.

Although Ashfield mustered the occasional attack the home side continued to press and appeared to have extended their lead ten minutes from the break. A Craig McEwan free-kick was double-fisted cleared by Hall only for the ball to be returned into the packed box and fall for Armstrong who prodded the ball home from the six yard line, but from an offside position. Three minutes later the game took on a new complexion when the visitors conjured up a classy goal. A quick passing move that took the ball from box to box, including a brilliant back-heel, ended with  McCann on the right drilling the ball to the near post where the incoming Shaun Fraser saw off the challenge from Menzies and keeper Ally Semple to guide the ball home.

Before the half-time whistle Hall tipped a Murphy shot wide of target and then punched clear the resultant corner to keep his team in the hunt at the break. H/T Glens 2 Ashfield 1

Ashfield began the new half brightly winning an early free kick at the edge of the box but although Smith’s effort beat the wall it flew high over the bar.  A cross from the right flashed across the goalmouth where Mitchell got a vital touch to deny the incoming Maxwell and Armstrong headed clear the resultant corner.

Gradually Glenafton got a grip of the game again and a perfectly timed tackle deep in the box by Darroch brought another excellent run by Boyle to an end. An Armstrong free kick skimmed over the bar, albeit Hall seemed to have it covered. On 55 minutes Cochrane skipped over Thomson’s tackle on the half way line and released Boyle down the left who made a bee-line for the box where he turned Smith inside out and, before Darroch could prevent him, then fired for goal which beat Hall at full stretch only for the ball to crack of the base of the post. Seven minutes later a McEwan free kick from wide on the left and high into the box evaded the outstretched arm of the high leaping Hall and everyone else in the danger area, all of whom could only watch as the ball skimmed inches wide of the far post. 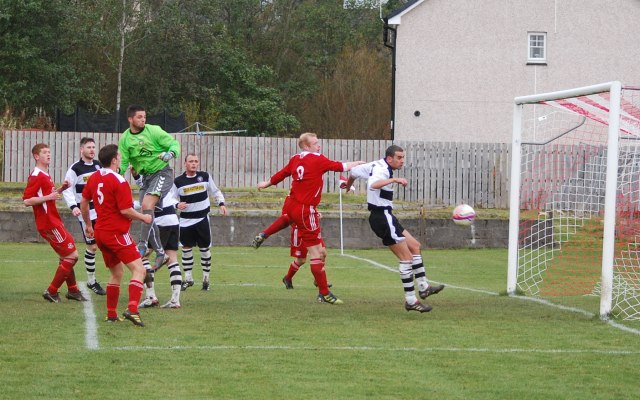 The game entered a spell of end-to-end play where both sides carved out a couple of chances that lacked the finishing touch. Ashfield’s substitute Chris Hall cut the ball across the face of goal but again it missed the intended target Maxwell.  A long throw-in from the left initiated some head tennis in the Glens’ box the ball eventually won by doubles partners Mitchell and McChesney. At the other end a Murphy cross to the back post was met by Armstrong but Hall did well to get low to push the ball behind for a corner. On 74 minutes the keeper pulled off the save of the match to again foil Armstrong after Boyle had burst into the box at pace and picked out his fellow striker on the six yard line only for Hall to bravely spread himself across the goal and brilliantly block the ball. Minutes later a knock down in the box by Armstrong saw Boyle nick in behind the central defenders but the alert Hall bravely rushed to edge of his six yard box to clutch the ball at the feet of the Glens’ live-wire. 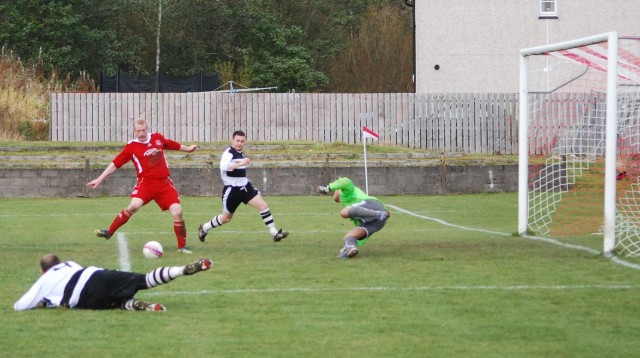 Save of rhe match from Stephen Hall

Two minutes later an injured Paul McKenzie was replaced by Richie McKillen. In no time the substitute set up Glenafton’s third goal when his cut back from the bye-line into a packed penalty box ended with Darroch for once mistiming his tackle and flooring Boyle. On 79 minutes up stepped Gareth Armstrong to send Hall the wrong way from the penalty spot.

On 78 minutes a Cochrane corner kick was lofted to the far side of the box and as McChesney made his run for his header his heels were clicked by Wright earning the Ashfield man a second yellow card and Glenafton a second penalty. The outstanding Hall got the better of Armstrong and at full stretch got both hands to parry the ball back into the danger area where Maxwell’s presence did enough to ensure that Cochrane’s attempt to net the rebound only found the side netting.

With five minutes to go Armstrong left to a rousing reception from the home support while the fresh legs and pace of his replacement Bobby Colligan gave the visitors’ 10 men some more anxious moments but thanks chiefly to the Hall’s heroics there was no further scoring. F/T Glenafton 3 Ashfield 1

Footnote:  The Glenafton Athletic Boys Club 2000s visited Loch Park with the wonderful trophy that they won in Parma, Italy last Sunday after defeating hosts ACD Colorno (1-0) and UP Vitrus (2-0) in the triangular tournament. Proud parents, families and friends gathered to join the crowd in showing their appreciation during the boys’ lap of honour. 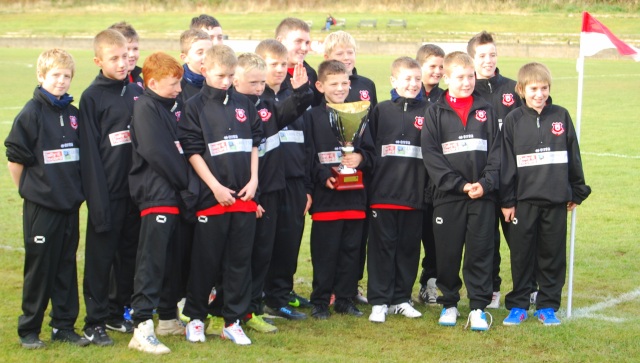