Today’s Scottish Cup final between Hearts and Hibernian got me thinking of connections between the Edinburgh clubs and Glenafton Athletic. 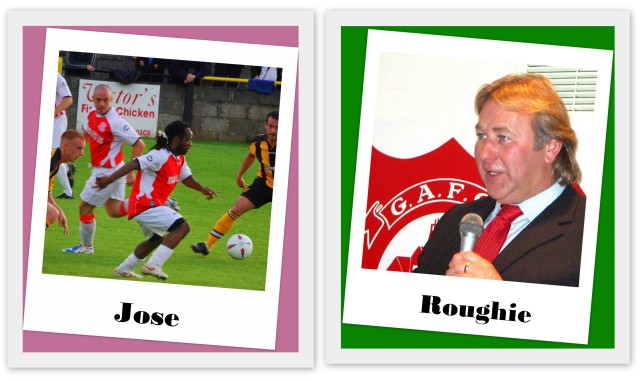 In recent seasons Jonathan Baillie (Hibernian 2003/2007) and Joe Quitongo (Hearts 1997/99) have played for the Glens while of course Derek Ferguson (Hearts 1990/93), a record £750,000 signing for the Tynecastle side, managed the club for a short spell. Sticking with football punditry former Glenafton goalkeeper and the club’s most successful manager Alan Rough (Hibernian 1982/88) made 175 appearances for the Easter Road side while another great Glens’ goalie Henry Smith (Hearts 1981/96) turned out 476 times for the Tynecastle club. Returning to the world of punditry Roughie brought Craig Paterson (Hibernian 1979/82) to Loch Park.

There are sure to be other connections in an era when former senior players saw out their playing days or cut their teeth in management in the Junior ranks.

The opposite was the case in the pre-World War II war era when many Junior players stepped up to the senior ranks. Understandably in the case of Glenafton of those players that did step up it was typically to west of Scotland clubs and in particular Kilmarnock. However, there are a few exceptions.

Glenafton were formed in 1930/31 and played in the South Ayrshire League before gaining admission to the powerful Western League in 1933/34 and a season late they were crowned Western League Champions. From that side David Logan (right-half, back row, 2nd from left) and John Millar (inside right, front row 3rd from left) signed for Hibernian, where they enjoyed mixed fortunes. After Millar’s debut in the Scottish Cup replay against Aberdeen he made only 13 league appearances for the club, over that season and the following two; his only goal coming against Albion Rovers. David Logan also made his debut against Aberdeen, in a league match on 24th August 1935 and would go on to make 109 league appearances before the outbreak of war; his last appearance was in 1941 against Hearts in a Southern League Cup tie.

A few seasons later, in Season 1938/39, centre forward Willie Anderson was attracting interest from Hearts and Blackpool, having played trials for both clubs while at Glenafton, but instead he signed for his home town team Kilmarnock but was never called up. Willie then signed provisionally for Hibernian and ‘in a fine gesture he presented Harry Brown the treasure of the Supporters Club with a handsome cheque’. He made a few appearance for the Glens at the start of season 1939/40 before making a permanent move to Easter Road and scored 30 goals for the club in 70 appearances.