BURNS DAY BLUES AS GLENS LOSE OUT WHILE LARGS BATTLE ON

Glens took the field on Burns Day clad in all blue but there was to be no sweet ending for the Afton. The home side crashed out the of West of Scotland Cup following a smash and grab raid by the Viking-boat-badged Largs Thistle who sunk their only real chance of the game while repelling wave after wave of attacks by their opponents.

The home side’s first chance fell on four minutes after good work by Ally Park saw him set up Joe Andrew for a shot from the left-hand side the box that was deflected wide for a corner kick. The kick was cleared and soon after Park, who had picked up an injury, was replaced by Dan Orsi.

On 10 minutes Alan Cairns floated a free-kick into the box which saw Ryan McChesney get the better of three black and gold strips only for his header to drift wide of the post. Two minutes later Mick McCann won a corner kick which was scrambled clear by a well drilled defence.

At the other end Paul Harkins’ free kick into the box was won in the air by McChesney and the loose ball snapped up by Kane O’Neill to fire a low angled shot from the outskirts of the box only for the big Glens defender to block that too. Although Thistle enjoyed a decent spell of pressure with Scott Adam holding the ball up well, albeit without creating an effort on goal.

Back game Glens and midway through the half Andrew hooked a ball from the edge of the box wide of the post and two minutes later Lee Gllacher laid of the ball to Dale Moore to clip a shot from 25 yards that beat airborne keeper Jamie McGowan only to skim off to the top of the crossbar.

Orsi from wide on the right chipped a dangerous ball into the six-yard box for the incoming Gallacher only for Craig Forbes to keep his cool and head the ball towards his keeper to kill it with his chest before clutching it to the aforesaid torso.

The home side continued to press and Findlay Frye forced his way to the bye-line only for his cutback to be cut-out by McGowan.

The visitors countered occasionally but again without penetrating the Glens box or engineering any shots at goal. In stark contrast the Glens turned the screw in the closing 10 minutes of the half  and forced no fewer than four corner kicks the most threatening of which saw McChesney outleap Adam on the six-yard line and power a header that appeared to rebound of the keeper, rather than be saved by him.

The loose ball was recovered by Glens and following a patient build up Frye picked out Moore on the corner of the box to lash a ferocious shot that beat McGowan at full stretch but zipped inches wide of the post.  The last action of the half saw the last corner-kick of the four headed clear by centre half Ross Love, having a tremendous game at the heart of the Largs defence.

The home side picked up from where they left off as Mick McCann held off Harkins at the bye-line to roll the back for Andrew only for Love to clear before the Glens recovered and the busy Gallacher mounted another attack down the left before George Sewell robbed him off the ball.

On 50 minutes Blair MacIntrye released Simon McBryde to break down the left before squaring the ball along the 18 yard line where Kane O’Neill met hit first time to hook a low drive that although keeper Davie Wilson got down low to stop with one hand former Glens striker Scott Adam pounced to tap home the loose ball from two yards out.

The Glens responded well and dominated the remainder of the half with Largs content, on occasion, to give away free kicks in their own half which they defended resolutely.

Gradually the Glens turned up the heat and on 63 minutes Orsi and McCann combined in the box to set up Moore to fire a shot across the face of goal that Gallacher came within a whisker of getting a touch before the ball flew inches wide of the back post.

Gallacher then switched play from left to right and from the bye-line McAusland chipped the ball into the heart of box where Andrew’s shot from 10 yards was blocked by George Sewell while Harkins blocked Frye’s attempt to bury the rebound before the keeper could get back on his feet.

There was little respite for Largs as back came Glens with McAusland slipping a ball through to McCann on the penalty spot who although was quickly closed down by Forbes and the outrushing keeper managed to guide the ball past them only for Sewell to scoop the ball off the line which then fell to Orsi to blast an angled shot that was blocked and cleared at the expense of a corner-kick. 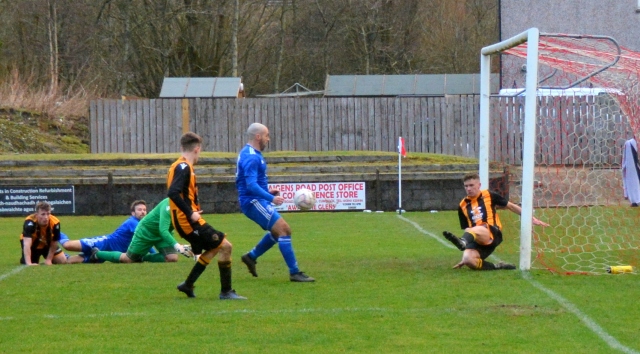 Gallacher’s kick was knocked on by Moore in a packed box and although Orsi won the ball his shot sailed high and wide of target.

The visitors who had earlier brought on Ben Black for O’Neill did occasionally venture upfield but often too short in numbers to mount any serious attacks.

On 75 minutes keeper Wilson from deep in his own half lined up to launch a free kick into the Largs’ box but instead slipped the ball wide to Craig Menzies to move forward before whipping the ball into the box for Moore to power a header from 15 yards screaming wide of the post.

At the other end another tussle between Adam and McChesney ended with a yellow card for the defender, as is often the case in these encounters, and a free kick from the edge of the box. The visitors frittered the chance away before Frye mopped up the danger.

On 77 minutes Glens brought on Ryan Nisbet for Mick McCann.

Moore’s free kick deep into the Largs box was headed over the bar by Harkins and although Gallacher delivered a peach of a corner-kick into the heart of the six-yard box there were no takers from either side and the ball rolled aimlessly on for a goal kick.

Nevertheless Glens kept the pressure on. Although Gallacher’s free kick into the box was headed clear the midfielder recovered the ball to feed Moore to clip it high into the box where McChesney beat Adam in the air again and Andrew pounced on the ball before lashing a shot from the corner of the six yard box only for McGowan to pull off a great point blank save to turn the ball round the post.

The keeper punched clear the corner kick that followed but back came Glens through Gallacher on the left and his ball into the box was headed clear by the towering Love.

Largs countered through Adam and MacIntyre who combined to drive forward to the left-hand side corner of the penalty box where the latter curled a shot that sailed high over the bar.

Into added time and Glens pushed to try and take the tie to a penalty shoot-out. Frye slipped the ball to Moore on the corner of the penalty box to whip  into the box where Harkin’s headed clearance sent the ball high into the air forcing the keeper to rush from his line to punch it clear from the head of Andrew only for it to be met by Frye to thunder a shot that whizzed inches wide. 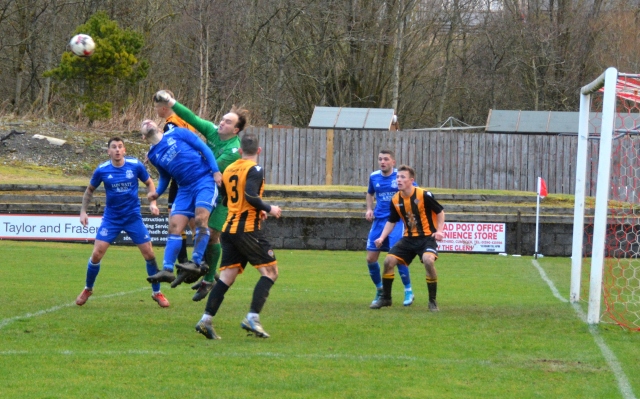 Gallacher then won a corner kick, Glens 10th of the match, that was frantically cleared upfield where Largs gave away what proved to be the last free-kick of the game. Keeper Wilson came forward to take it, as every other player packed the box, but his counter-part had the last say as he leapt high to clutch the ball safely. 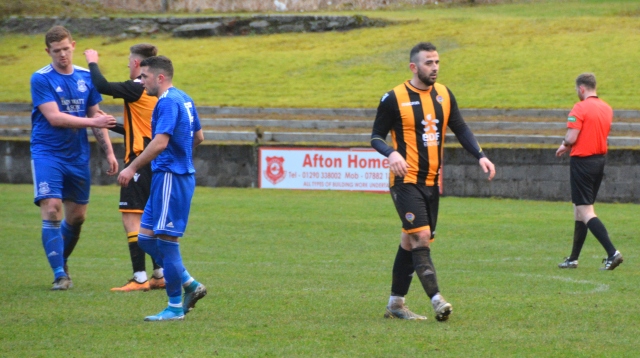