Prior to kick-off there was a minute’s silence in memory of Glenafton Athletic legend Richard “Nodder” Kirkpatrick who recently passed away. 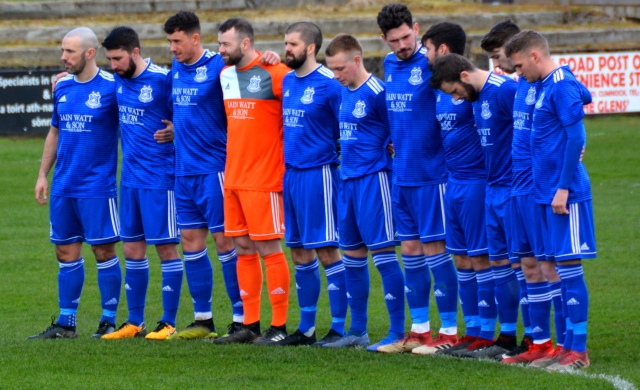 Glens were without top goal scorer Chris Dallas while Ryan McChesney and Ally Park were not available for selection. This was the fourth meeting of the two sides this season with little between the teams in the previous three encounters meetings – Pollok progressing in the Scottish Junior Cup via a penalty shoot-out in the replay at Newlandsfield and the Glasgow side winning the corresponding league fixture with a controversial stoppage time spot kick.

Chances were thin on the ground as play swung frantically from end to end without an end product. Pollok came close on 15 minutes when a free-kick on the right-hand outskirts of the penalty box was whipped into the goalmouth by Stefan McCluskey but it never got beyond the first man Findlay Frye who stuck out a boot only for the ball fly inches his own crossbar. The corner-kick that followed was cleared to the edge of the box for Dale Moore to snap up and drive forward before releasing Dan Orsi wide on the right with a glorious pass but McCluskey was on his heels to nick the ball from his feet at the expense of a corner which was cleanly clutched by keeper Scott Johnson, a promising product of the Pollok youth set-up. 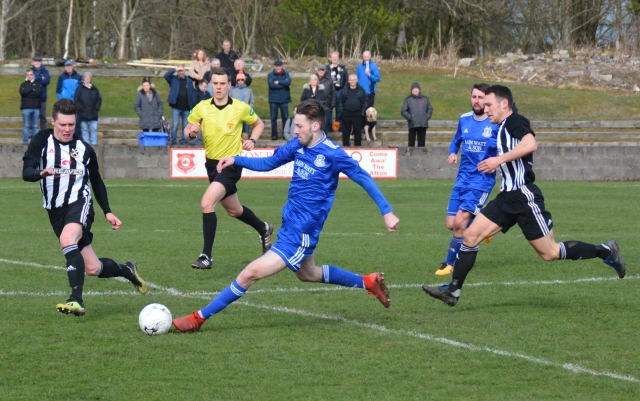 Play continued to flow back and forth interrupted with some midfield battles and hand-balls, deliberate and otherwise. On 23 minutes another battle in the centre circle ended with the official initially awarding the free kick to the Glens before changing his mind. The ball was quickly played upfield to Bryan Young to gather close by corner flag before giving a defender the slip to clip the ball into the box where initially was headed high by Craig Menzies. As the ball descended to edge of the Shaun Fraser edged out Moore in the aerial battle forcing the ball into box where despite Cammy Marlow’s attempt to head it clear Lok striker Adam Forde executed a superb overhead kick that sent the dropping ball into the top corner with the keeper Brian McGarrity rooted to the spot. To add salt the wounds Marlow was booked for questioning the high-boot of Forde. 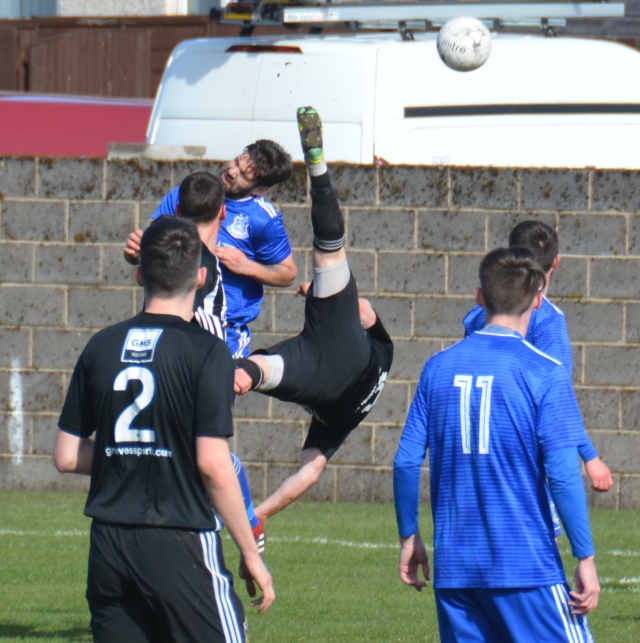 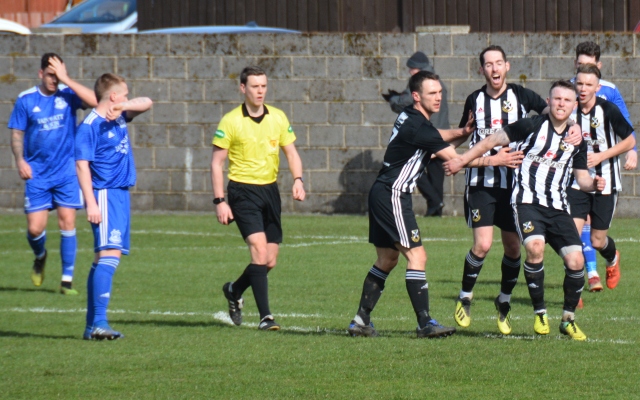 Five minutes later the striker passed up a great chance to double the visitors lead when a long throw into the box from Grant Evans was headed on by the Ryan McGregor to fall perfectly for Forde but his well struck volley from 12 yards out bulleted wide of the post.

The meaty tackles in the middle of the park continued and after Moore nicked the ball from McCluskey he blocked the midfielder with a swinging arm before pulling him to the ground sparking mini melee. As is often the case in these situations the cop out is to show both the aggressor and the aggressed are shown a yellow card a piece. At the bounce up McGregor and Marlow went eye-to-eye before Evans intervened with a powerful two-handed shove on the Glens player, worthy only of a yellow card.

A minute before half-time Fraser over stepped the mark when breaking through the middle he over hit the ball which allowed Alan Cairns to recover it briefly before the Lok midfielder’s studs chopped him to the ground to earn an instant red.

The home side made a lively start to the second half but within three minutes it was 10 a-side after Dale Moore was late with a tackle on Allan McKenzie earning the midfielder a straight red.

The game settled back into a similar pattern of the first half with half chances at either. Just before the hour mark a Pollok free kick from the left was headed over the bar by Stuart McCann but to both team’s surprise the award was a corner kick. The ball was floated to the back post where Danny Boyle won the aerial battle to head the ball home, however certainly to one team’s surprise the goal was disallowed for Boyle’s push on Kyle McAusland. To rub salt in his wounds Boyle landed badly and never recovered forcing his substitution with Mark Sideserf.

Danny Boyle  on the ground finds out his goal is disallowed

It proved to be a turning with the Glens now very much on the front foot. Leon Murphy picked up the ball wide on the right and after twisting past a couple of defenders curled a great cross into the box for Mick McCann to flick a looping header that looked destined to find the net only for Johnson to pull off a wonderful save to push the ball over the bar. The young keeper then pushed the corner kick away with both hands before recovering the ball from Murphy’s attempt to head it back into the danger area. He then launched the ball upfield and Forde let it take a bounce before trying to lob the ball home but it slipped past the post.

The Glens continued their push for the equaliser with Orsi proving a handful down the right flank. Still the visitors proved a threat on the break and midway through the half Evans cross was cut-out for a corner kick which was headed clear and gathered by Joe Andrew to turn and slip a great pass to Murphy. The dynamic midfielder burst through the middle skipped past the solitary defender to run in on goal only for the advancing goalie to time his run to the edge of the box perfectly to clear the danger. 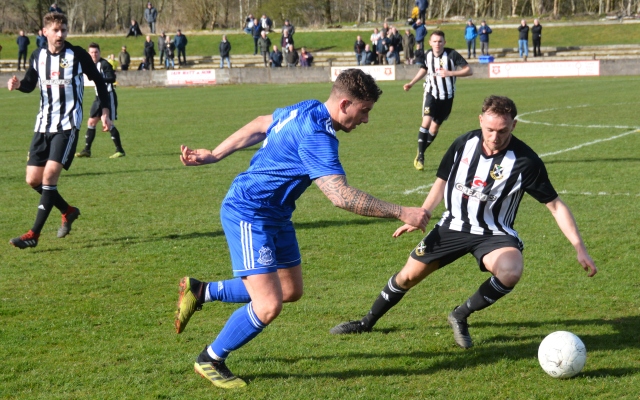 Dan breaks down the right

On 69 minutes Pollok brought on Jamie Henry for Stefan McCluskey and five minutes later Bryan Young was replaced by Jordan Morton. In between times Murphy’s header in the box from a Frye cross drifted wide of the far post.

A free kick floated into box was headed wide by Orsi as Glens continued their strangle hold on the game. On 77 minutes Orsi’s determination down the right won the home side another corner kick which ended with McCann bulleting a header inches over the bar.  A minute later following a goal mouth scramble in the Glens box the home side broke upfield where Andrew on the outskirts of the box slipped the ball to match Marlow’s run into the left-hand side of the box only for the alert keeper to rush from his line again to get a touch to deflect Cammy’s shot off target.  The corner-kick was cleared, as was the one soon after, as Glens turned the screw.

Deep on the left Cairns’s throw in to Andrew on the edge of the box was returned to the attacking full back take a touch before clipping an inch perfect cross for McCann in the six-yard box only for Sideserf to wave flailing arm across the Glens striker face and knock him to the ground – penalty kick. Although Pollok have saved 4 of the last Glens penalties against the up stepped former Pollok player Findlay Frye to drill the ball into the corner of the net beyond the finger-tips of Johnston. The game now all square at 1-1 on 82 minutes.

Findlay finds the net from the spot 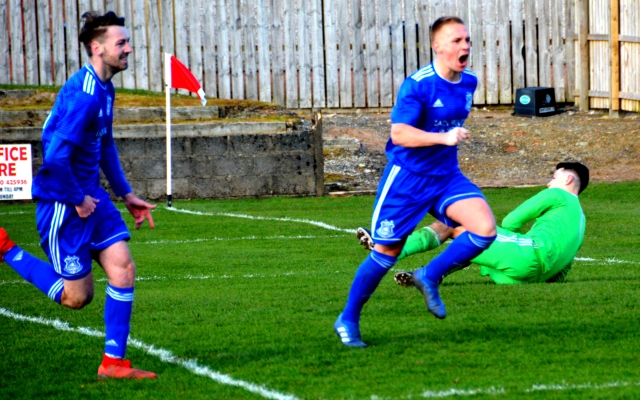 Pollok could cope with the Glens pressure as the New Cumnock side now pushed for a winner and it came a minute from time.  From a free kick wide on the left Cairns delivered another peach of a cross for McCann but his glancing header from 8 yards out was drifting well wide of the back post and with the Pollok defence motionless Findlay Frye sprinted for the bye-line to guide the ball between keeper and post from the narrowest of angles to spark of joyous celebrations. 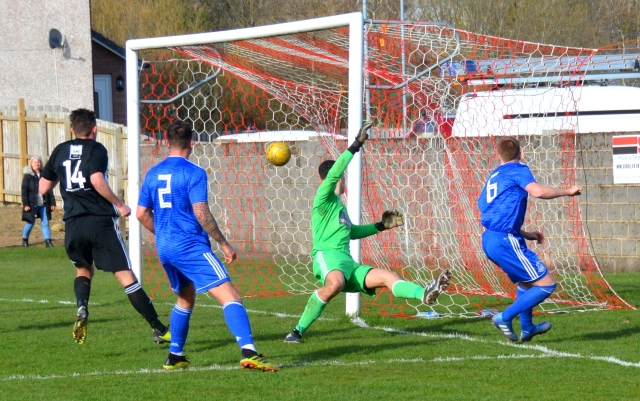 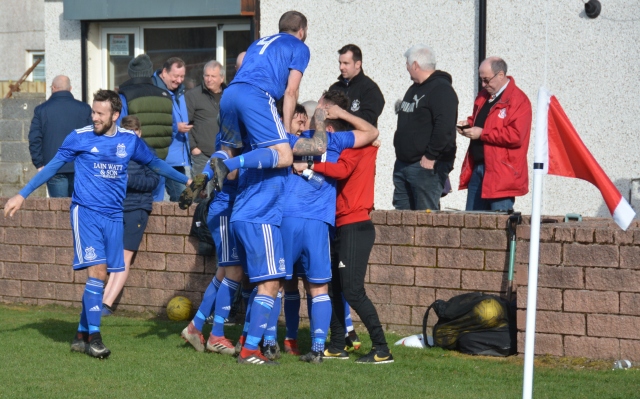 The visitors had one last chance after Frye was booked for a foul on the outskirts of the box but the set piece summed up the visitors closing twenty minutes as the ball drifted aimlessly out of play and the points were staying at New Cumnock. 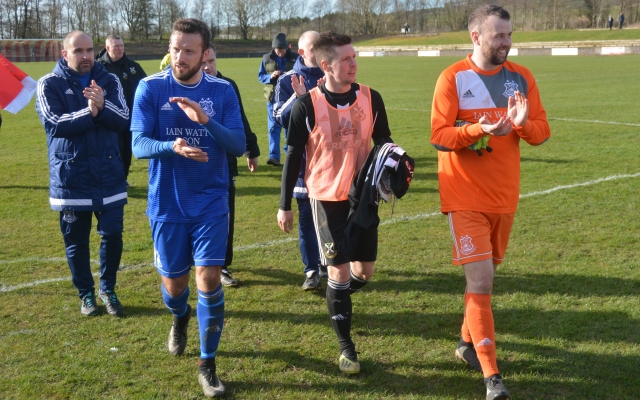