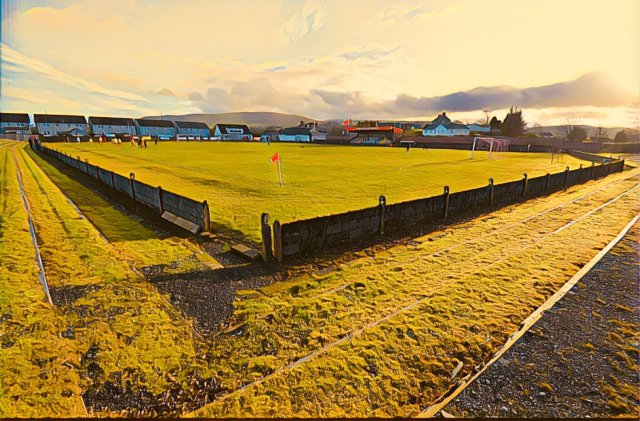 Glens made a couple of changes from the eleven that started in the 3-0 win at Cumnock. In came Dale Moore and Conor Lynass for Findlay Frye and Leon Murphy, both on holiday. There was a welcome back to top goalscorer Chris Dallas and place on the bench after a spell out through injury since the Meadow game in mid-November.

The Glens were very much on the front foot from the kick-off and created the best of the chances on offer.  Dan Orsi won a corner kick on the right after 7 minutes which was delivered to the heart of the box by Connor Lynass and the ball met on the volley by Dale Moore only for Joe Bradley to clear it off the line with the keeper rooted to the line. Six minutes later Joe Andrew’s knock-on set Lynass free to drive into the box and fire a low angled shot for goal, as Paul Frize closed in, that appeared to have been tipped inches wide by diving keeper Stephen Grindlay, however a goal kick was the decision.

The visitors made some progress down the right which ended with Darren Christie floating a ball to the back post for Kenny McLean only for keeper Brian McGarrity to intercept and gather the ball safely.

On 24 minutes Cammy Marlow clipped a free-kick into the box where Ryan McChesney got the jump on both centre backs to head the ball on for Mick McCann to flick it back up into the air and then from inside the six-yard box attempt to guide the ball home but Grindlay got an outstretched hand to push it away as Andrew threatened before the ball was scrambled away.

Glens continued to press and on 28 minutes were rewarded after Ally Park picked out Joe Andrew in the box with his back to goal and Kevin Green in close attendance the striker quickly turned to lash an angled shot from 12 yards beyond the reach of the keeper and into the corner of the net.

The visitors looked out of sorts and McCann beat John Sheridan in the air with ease again to knock the ball for Andrew to stroke a perfectly paced pass to match the alert Lynass’s run into the box only for Grindlay to be well placed to catch his shot.

Another great touch from Andrew found McCann at the left-hand corner of the penalty box and after further progress was blocked, he rolled the ball back to Lynass to curl the ball to the far side of the six-yard box for Orsi to take on defender and keeper and win a corner kick. Lynass played it short to the edge of the six yard where Orsi clipped it goalward only for his shot to be deflected inches wide for another corner. On this occasion Lynass played it high into the box where Sheridan headed it clear. The ball was quickly recovered by Marlow and with a peach of a pass picked out Lynass tight on the left touchline to float a ball into the box which after going through a ruck of players fell for Mick McCann to rifle the ball into the roof of the net from 3 yards out. Glens 2-0 up after 39 minutes.

Two minutes later Beith showed their teeth when Frize’s close-range effort came off the base of the post and Kyle McAusland was on hand to clear the ball to safety. The big defender was less fortunate in the last action of the half.

Bradley appeared to be chasing a lost cause when hunting down a ball on the right which was being ushered out of play by McChesney only for the Beith midfielder to arrive in the nick of time to whip the ball across the face of goal where it cannoned off the back of McAusland and into the net past the wrong-footed McGarrity for an unfortunate own goal.

Beith began brightly after the break and were awarded a penalty kick after Park brought down Paul Haggarty in the box.

Kenny McLean scores from the spot

Kenny McLean sent McGarrity the wrong way from the spot and incredibly the Glens having dominated for most of the match were pegged back to 2-2 on 48 minutes.

Both sides had a couple of half chances before the Glens restored their lead on 57 minutes. Marlow rode the tackle from Jamie Wilson on the outskirts of the box before slipping the ball between two defenders for Mick McCann to get the jump on Sheridan and then stretch to guide the ball beyond the advancing keeper and into the far corner of the net. 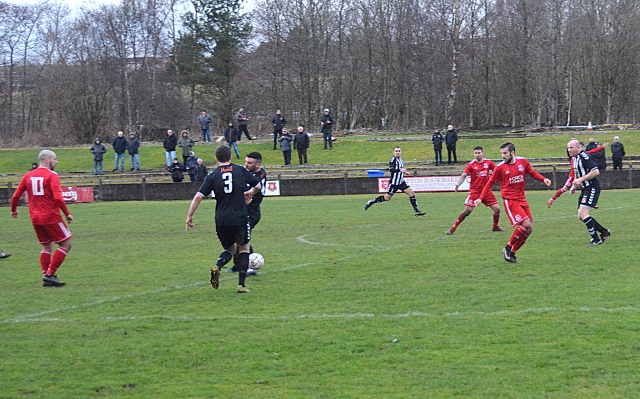 Three minutes later it was Andrew’s turn to feed McCann with a defence splitting pass into the box and again the striker appeared to get the better of Sheridan before drilling a low angled shot into the same corner of the net; only for the offside flag to curtail the celebrations.

The visitors then enjoyed a good spell of pressure. Midway through the half McLean’s angled shot stretched the side netting. Soon after Frize’s fine run into the box and cut-back for Haggarty in the six-yard was intercepted and cleared by McAusland. Back came Beith down the right flank with Wilson slipping the ball to Christie and as he pushed forward to the edge of the box Marlow’s tackle earned him a second yellow card and an early bath. 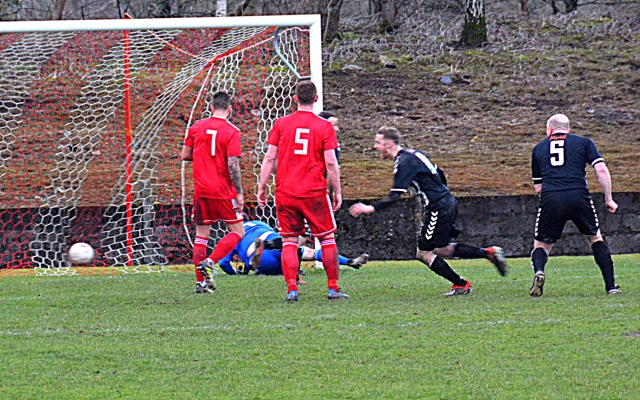 The free-kick that followed was met by Paul Frize and the ball whizzing past McGarrity ay his near post. The match all square again at 3-3 on 70 minutes with Glens down to 10 men.

A minute later McLean picked out Christie in space on the right-hand side of the box and continued his run into the box. Christie took a touch or two before lashing the ball which flew into the net but adjudged to have done via a touch from McLean on a offside position. As the dust settled Haggarty was shown a second yellow card, presumably for protesting the decision, and it was now 3-3 and ten-a-side.

Both sides went in search of an equaliser with the home side coming closest to finding one. Dallas from the half-way line chased down a long through ball only for the outrushing Grindlay to slide out his six-yard box to push the ball away from the feet of the Glens striker. The keeper then stood firm to safely grab the ball from the feet of Park as he surged into the six-yard box.