Glens welcomed back midfielder Findlay Frye to the starting line-up in his second spell at Loch Park after signing from Kilwinning Rangers in the summer. New faces on the bench were summer signings striker Kit Cummins and goalkeeper Craig Burns, along with Robert Neill of Glenafton U19s and trialist Rhys Wallace, currently back in Scotland from a soccer scholarship in the USA.

The Loch Park surface was looking in great nick and would be subjected to a gusty wind and sunny intervals between a range of showers from light to heavy.

Although Glens started brightly it was Hurlford that took the lead on 18 minutes after the visitors corner-kick was only partially cleared and the ball fell for Jack Whittaker to strike a low angled shot through a ruck of players that took deflection to wrong foot the keeper before ending in the net.

The hosts came close to equalising three minutes later when Dale Moore got on the end of a free-kick at the back post only for keeper Chris Murchie to block his shot from a few yards and push the ball onto the bar. The keeper then blocked a low drive from Connor Lynass only for the Glens midfielder to pick up the rebound and set up Cammy Marlow with a shot that was blocked by Liam Caddis at the expense of a corner-kick, the first of three in quick succession that were cleared.

On the half-hour mark player Paul McKenzie floated a free-kick into the box and the ball eventually fell for fellow former Glens player Ross Robertson to whip a vicious shot just wide of the far post. Glens were quickly on the back on the front foot. A ball played into the box by Alan Cairns for Joe Andrew was headed clear by former Glens player Richie McKillen and fell for Chris Dallas on the edge of ‘D’ and before centre-back Chris Robertson could close him down he hooked the ball into the pitch to send it skiffing across the surface (like a stane across the Afton without the ripples) before it squeezed between the keeper at full stretch and the post to tie the match on 35 minutes.

Glens continued to press and two minutes from the break had a strong claim for a penalty as Chris Robertson grabbed a handful of Andrew’s jersey in the box, only for the striker to be flagged offside. The final chance of the half fell to the visitors through Caddis only for McGarrity to pull off a fine and push the shot from 18 yards round the post.

The visitors forced an early corner which ended with Robertson’s close range being blocked by a sea of red shirts. Soon after the striker performed his defensive duties well as headed clear a Glens corner.  Ten minutes later the home side won another corner which although cleared heralded a period of pressure for the home side. Lynass won the race for a ball down the right drawing the keeper from his line who was then left in no man’s land as the midfielder cut the ball into the box and although McKilllen prevented it reaching its target of Dallas the ball fell for Andrew but as the striker tee-ed up his shot Chris Robertson made a fine tackle.

Minutes later Dallas’s header from a corner looped over the bar. Kyle McAusland combined with Andrew down the right to set up another attack but his effort was blocked and the ball fell for Findlay Frye in acres of space 25 yards from goal  – within a flash he took a touch before curling a shot that took a bounce before beating the keeper low at his right hand post; memories of Camelon Scottish Junior Cup semi-final came flooding back as the popular midfielder celebrated a goal on his return to Loch Park. Glens 2-1 up with 61 minutes gone.

Five minutes later Glens almost doubled their lead after Dallas set up Andrew in the box and although he gave Robertson the slip his attempt to guide beyond the advancing keeper ended the ball slipping past the post.

Midway through the half Hurlford replaced Caddis with former Glens striker Michael Reilly and soon after Glens brought on trialist Wallace for Craig Menzies.

Ford’s new signing Alex McWalters’ free kick from the edge of the box beat the wall but sailed over the bar, while at the other end Ryan McChesney’s long range shot nicked off a defender to send the ball whizzing past the post and the resulting corner was cleared. 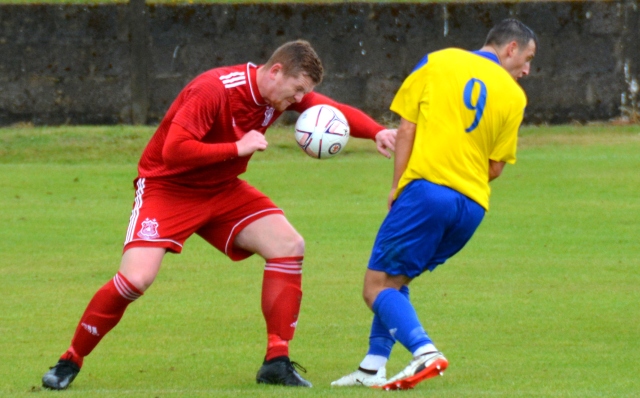 With 12 minutes to go Hurlford brought on Ryan Caddis for Paul Byrne . A minute later the visitors were level after good work down the left by Whittaker and his ball across the face of goal intended for the incoming Reilly at the back post was turned into the his own net by the unfortunate McChesney, who had an outstanding game. Ford were now very much on the front foot as they battled for the winner.

Glens brought on the fresh legs in the form of new signing Kit Cummins for Chris Dallas who it seemed had covered every blade of grass on the pitch. Cummins was soon in the thick of it, his shot from outside the box deflected for a corner that was cleared at the near post. Murchie then made a comfortable save from Andrew’s shot from 12 yards. At the other end McAusland got down low to head clear a wicked cross from Whittaker as Robertson threatened to pounce. Marlow cleared the loose ball upfield for Cummins to give chase forcing Murchie to rush out his box but his clearance fell for Andrews only for his attempt to find the empty net from 35 yards to drop over the bar. Both sides tried frantically to fashion a winner in dying minutes without success to set up the penalty shoot-out with the winners earning a bonus point. 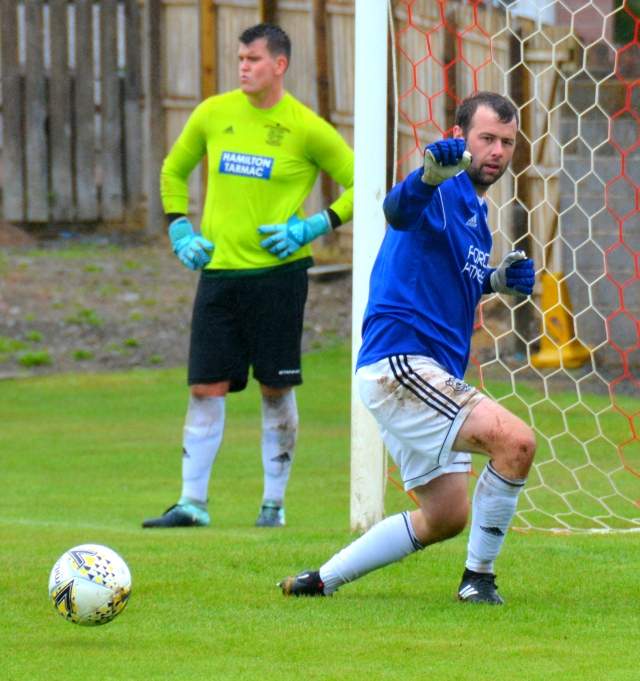