Glenafton Athletic faced Auchinleck Talbot in the Ardagh Cup Sectional Cup final at Meadow Park, Irvine in a repeat of the 2014/15 final when the New Cumnock side triumphed at Troon. Of course, Glenafton came out on top when both sides faced each other in the Scottish Junior Cup final at the end of last season having already done the league double over the Talbot on their way to being crowned Premier Division Champions. The New Cumnock side made it four wins a row over their local rivals with a 1-0 win at Beechwood in the Ardagh Section match as they progressed to the final with a 100% record.

The Glens started brightly and a Jamie McKernon free kick from 25 yards dipped viciously over the Talbot wall and just wide of the post with keeper Andy Leishman at full stretch.  Dale Moore then found Joe Andrew to set up a cross from the left-hand side of the box that took a wicked deflection of Ross Harvey sending the ball skyward and is descended towards the Talbot goal Leishman was forced to nudge it over the bar. Conor Lynass weaved his way from the right infield and picked out Ally Park in a pocket of defenders in the box who quickly released the ball to Mick McCann and as the former Talbot teed up to shot Willie Lyle broke away from the aforementioned pocket to get a goal-saving block on McCann’s shot from 8 yards.

Talbot came more into the game as the half progressed and had the ball in the net after Graham Wilson swivelled in the “D” to hook a super volley that flew into the net past keeper Brian McGarrity who made no effort to save as he acknowledged the offside-flag. Wilson then played a neat one-two with Gareth Armstrong to advance deep into the Glens box only for shot at gaol to be blocked by Ally Park.  H/T Glens 0 Talbot 0 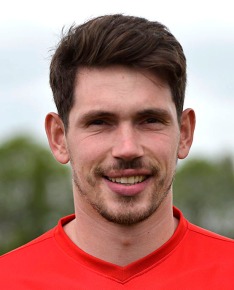 Glens were first to show in the second half and struck the woodwork twice within a minute.  McKernon, deep in on the left hand side of the Talbot half, rolled the ball back for Kyle McAusland (left) as he pushed forward over the half way line and from all of 35 yards he launched a blistering dipping shot that beat an airborne Leishman at full stretch only for the ball to thunder off the upright. Memories of Alan Cairns winning goal in the Scottish Junior Cup spring to the minds of players and supporters of both persuasion.

Within 60 seconds Moore collected a pass from Joe Andrew to break forward before curling a wicked shot from 25 yards past two defenders in his path and again the ball beat the keeper at full stretch and yet again the woodwork came to the Talbot’s rescue. Andrew hunted down the loose ball only for McCracken to get a touch which looked certain to send the ball into his own net only for the grounded Leishman to get a glove to it and push it away for Gordon Pope to boot clear.

Talbot counted their blessings and more. A pass from Armstrong released the lively Jamies Glasgow wide in the box to crack a shot from a tight angle forcing McGarrity to pull off a fine and push the ball out for a corner at his near post. That corner was partially cleared and another followed in quick succession which was delivered to the edge of the six yard box up leapt Craig McCracken to bullet an unstoppable header downward and up into net.

Talbot’s tails were up and Glasgow’s pace opened up a couple of good chances both of which ended with the young striker caught in two minds to pass or shoot and the chances gone. A Talbot free-kick then crashed of the junction and cross and bar. In a final flurry McGarrity launched a couple of free kicks into a packed Talbot box, one of which ended with McCann’s shot blocked on the line and the other with Chris Dallas’s header flashing wide