Super League Premier Division champions Glenafton hosted Super League 1st Division champions Girvan in the semi-final of the Evening Times League Champions Cup. The Glens formed a guard of honour to applaud Girvan on to the pitch and in a move that Robbie Shepherd of “Tak the Floor” fame would have appreciated the visitors reciprocated and formed a guard of honour for their hosts. 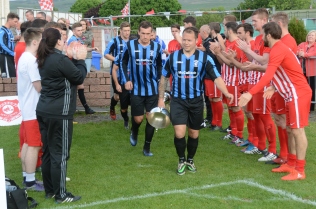 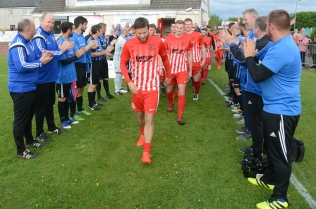 Both sets of players then received their champions medals in turn before posing for team photographs with their respective league trophies; the Glens also displaying the Scottish Junior Cup for good measure. 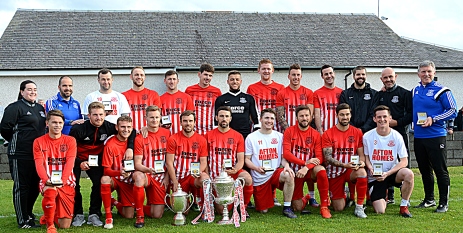 There were plenty of chances on show in an entertaining first half but the finishing generally lacked the bite of the cloud of man-eating midgies that descended on the Loch Park to munch on players and supporters of both persuasions in equal measure.

Girvan’s early chances fell to Andy Stevenson (his goal had knocked the Glens out of the Ayrshire Weekly Press Cup at Girvan) and Robert Patterson – their respective header just off target. At the other end Ryan McChesney met a corner kick sweetly only for his volley to slip wide of the post and soon after keeper Scott Johnstone rushed from his line to foil Conor Lynass’s run into the box.

Chances continued to come and go at either end with Stevenson & Patterson going close for Girvan with John Carter & Cameron Marlow replying likewise for the Glens. 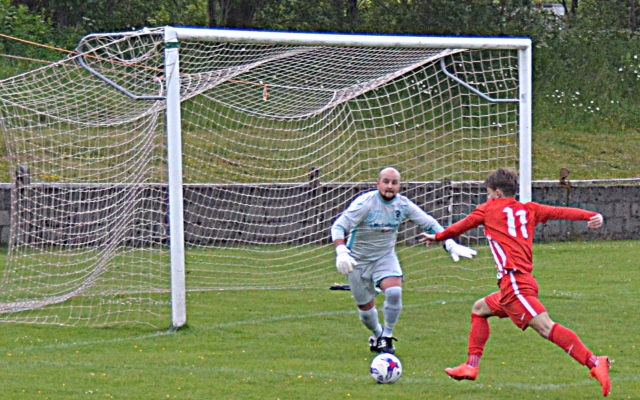 Glenafton enjoyed a sustained period of pressure beginning on 28 minutes with a scramble in the box and the ball falling for Lynass only for Johnstone to narrow the angle to force the midfielder to drill his shot inches wide of the back post. The keeper then got two strong hands to push away a thumping free-kick from David Gray. Ten minutes before the break Marlow took out the Girvan defence with a superb pass into the box for Joe Andrew who quickly fired a low-angled shot that slipped beyond the advancing keeper but again the ball finished just wide of the post.

A minute later the home side were almost caught out with a self-inflicted sucker punch. Chris Meikle’s pass-back header caught Blair Lochhead well off his line leaving the keeper to chase after the ball heading to the gaping net and although the ball won the race it also hit the post and bounced back into the hands of the relieved goalie. 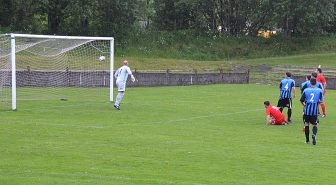 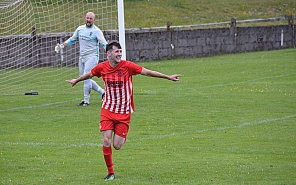 Back up the field and finally a breakthrough borne out of John Carter’s determination. The striker played a one-two with Lynass on the outskirts of the box before firing a shot from just inside the box that was blocked by the outstretched leg a defender. Unperturbed Carter chased down the loose ball and as he fell to the ground managed to fire a shot between two defenders and beyond the keeper rooted to the spot and into the net. Glens 1-0 on 37 minutes.

Glens pressed for a second, winning three corner-kicks in a row before the last chance fell for the tireless Ryan Borris only for his shot from 20 yards to dip over the bar.

The home side picked up where they had left off at the start of the second half firmly on the front foot. A couple of corner-kicks were cleared and efforts from Borris and Carter kept the keeper on his toes. 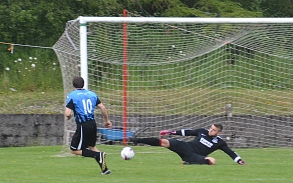 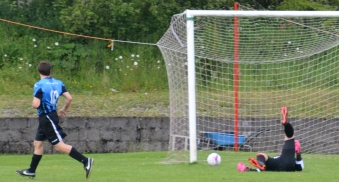 Girvan gradually worked their way back into the game to draw level on 63 minutes after a deadly break up the right that ended with Robert Patterson being picked out in space at the back post where he kept his cool to guide the ball beyond Lochhead’s valiant attempt to block it with an outstretched leg.

Two minutes later the visitors brought on the fresh legs of the former Glenafton striker Michael Reilly for Andy Stevenson and the visitors now had a spring in their step and, like the midgies, tasted blood.  On 67 minutes a corner kick played to the near post was met by the leaping Patterson to flash a powerful header that seemed destined for the goal only for Lochhead to powerfully punch the ball to safety. 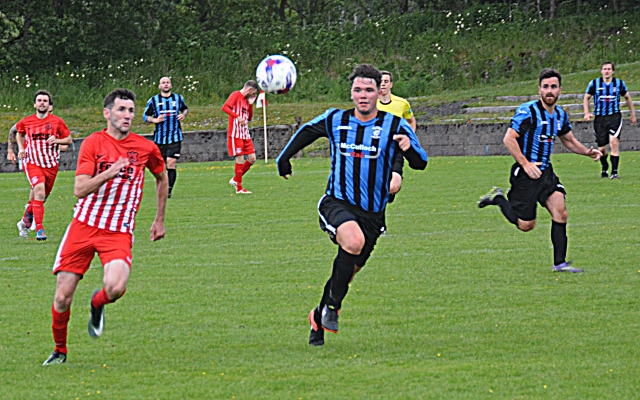 John Carter on the move

Another change for Girvan with 10 minutes to go saw Marc Cameron replace David Jardine as both sides chased for the goal that would preclude the dreaded penalty shoot-out and another twenty minutes of midgie torture (yes, they were that bad!). The substitute almost made an immediate impact as he picked out Jack McDowall in a packed box who quickly turned to blasted the ball from 6 yards out only for Lochhead, his view blocked by a defender, to pull off a magnificent save and push the ball wide for a corner kick.

Play was then halted for some time after a Girvan players had noticed that Conor Lynass was in some distress and the Glens midfielder was stretchered off and replaced by Dan Orsi. 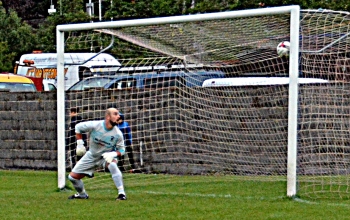 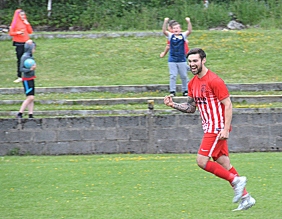 Play resumed and the Glens defended the Girvan corner-kick with Kyle McAusland and Borris breaking upfield on the counter-attack which although was eventually cleared up, it heralded a determined final push by the home side which was rewarded on 88 minutes. The ball fell for Orsi on the outskirts of the box and trapped within a pocket of defenders he slipped the ball to Cameron Marlow who lashed a shot from 22 yards out that caught Johnstone rooted to his goal-line with a perfect view to watch the ball crash off the post into the net.

Girvan had little left to give as the Glens continued to push forward in waves and scored again as the game entered time added-on. Carter chased down a seemingly lost cause to win a corner-kick which was floated into the box by Gray and met by Carter only for his header to be blocked by the raised arm of the unfortunate Scott Dinwoodie. Up stepped David Gray to bulge the net from 12 yards out and send the Glens on their way to the Evening Times League Champions Cup final and a possible treble – suddenly the midgies didn’t seem that bad!

Footnote: Happy to reprort that Conor’s injury although a sore one was not as bad as first feared. Here’s to a speedy recovery