The Rob Roy side graciously formed a guard of honour accompanied with flag waving youngsters from Glenafton’s Fun Fours to applaud the champions on to the pitch. 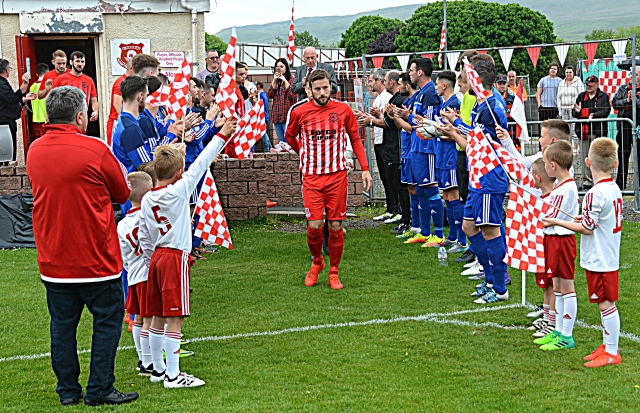 The tension encompassing last week’s meeting both on and off the park was unsurprisingly not evident with tempo of the match fairly low-key while the home support was in good voice in preparation for the trophy presentation to come.

Early chances came from set plays with a couple of corner kicks from the Glens being comfortably cleared while a Rabs free kick to the back post was headed wide of target by Kevin Green.

On 17 minutes the visitors came within a whisker of opening the scoring.  Blair Lochhead had to be on his toes to tip a wicked cross, from Chris Duff wide on the left, over the bar. The resulting corner kick to the back post was headed back across the goal mouth by Danny Boyle where Willie Sawyers recovered the ball on the bye-line at the far side of the box before brilliantly turning Ryan McChesney and whipping it past Lochhead at the near post only for Fraser to be unable to connect on the goal line with an empty net beckoning.

Two minutes later Darren McGill fashioned a low shot from 20 yards that whizzed past the post as the Glens began to see more of the ball. The home side engineered a number of good counter-attacks but too often the final ball was over-hit and the chance gone.

On 29 minutes Mick McCann head-flicked the ball from inside his own half to set Conor Lynass free to break into the left-hand side of the box only for his cut-back intended for the onrushing John Carter to be cleared by Boyle. Lynass recovered the ball and picked out to McCann deep in the box who rolled it out to Craig Potter to fire from 22 yards out  only for the ball to sail wide of target.

Rob Roy responded and took the lead on 34 minutes after play was switched from Duff on the left to Shaun Fraser, in space on the right, to cut in the box and use McChesney and Sawyers as a shield to curl a sweetly struck shot beyond the unsighted Lochhead at his near post and into the far corner of the net.

Tails up, the visitors continued to press and Lochhead did well to get a hand to another wicked cross from Saywers earmarked for Fraser in the six-yard box. The Rabs recovered the loose ball for Sawyers to float in another cross that was headed away by McChesney and eventually cleared by Dan Orsi.

Another Rabs attack was mopped up by McGill and cleared upfield for McCann to pick out the overlapping Lynass with another perfectly weighted head flick only for his run to be ended by a trip from Scott Walker. Lynass curled the free-kick beyond the wall for McCann and although he got the jump on Green his header lopped over the bar.

Two minutes after the restart the hosts were denied an equaliser when an alert Michael McKinven rushed from his line to narrow the angle and block Carter’s shot from close range. Rabs replied through a free-kick floated into box and after a game of head-tennis the ball fell for Sawyers who quickly turned to fire a low angled shot that sneaked past the back post with the keeper beaten.

Although play continued to ebb back and forth there were few clear-cut chances created. On 53 minutes McCann’s header from a Kyle McAusland’s cross was well held by McKinven. At the other end a Rabs corner-kick caused havoc in the Glens box before the ball arrived at the feet of Green to thump it first time only for Lochhead to pull off a fine block.

The visitors won a free kick at the edge of the box and although Fraser curled the ball round the wall it slipped just wide of the post. McAusland opted for power when Glens earned a free-kick from  similar position, his shot ricocheted off the wall and the corner kick that followed was cleared.

On 66 minutes the Glens brought on Ally Park for Craig Potter and before he could kick a ball Fraser was fouled in the box and Willie Sawyers slotted home the spot-kick.

The home side then made another couple of substitutions with Chris Dallas coming on for Mick McCann and later Ryan Borris for Dan Orsi.  Dallas’s angled volley from inside the box beat the keeper but dipped over the bar.

The Glens defence frantically scrambled clear another Rabs attack and mopped up a few more as the clock ran down. In a final flurry the home side came close to a conjuring up a consolation when Lynass weaved his way into the box only for the keeper to block his shot. The midfielder snapped up the rebound to fire in another shot that was also blocked sending the ball to the other side of the box where McAusland low powerful drive was also blocked.

The final whistle went soon after.

The victory and three points secured a second-place finish for Rob Roy and they left the field to great applause from their travelling support. Champions Glenafton were cheered off the park and after changing into fresh tee-shirts in the Hunter Pavilion returned to the park where New Cumnock’s Sir Tom Hunter presented club captain Craig Menzies with the West Region McBookie Super League Premier Division trophy and the celebrations began in earnest. 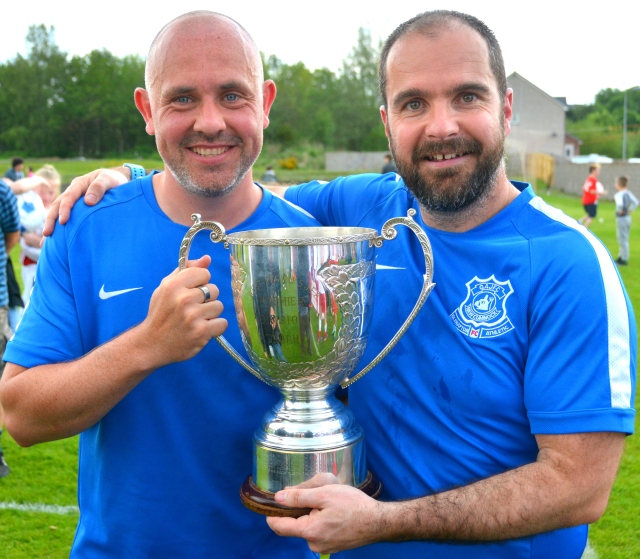 Manager Craig McEwan and assistant manager Craig Potter in their first full season in charge at Loch Park had delivered the league title, the first for Glenafton since they were crowned ‘Last Champions of Ayrshire’ in 2001/2002 prior to reconstruction and the formation of the West Region.

Congratulations Glenafton – you gave it your best.