GLENAFTON moved three points clear of Rob Roy thanks to a late penalty converted by David Gray. They had got off to a dream start with a goal inside a minute after John Carter slipped a great ball to

Troon’s first attempt on goal followed a Dean Keenan free-kick which eventually found Ryan Nisbet, whose overhead kick was just wide. Mark Curragh showed a superb turn of pace to pick out Evan Maley in the box but he couldn’t connect cleanly to trouble Brian McGarrity in the Glens’ goal.

Gray then sent a superb crossfield ball towards Dan Orsi but it was just too far in front of the winger. Cammy Marlow then hit the bar, with Andrew following up to head home the rebound, but the offside flag was up.

As the first half drew to a close, the home side were enjoying much possession but the final killer pass was lacking.

Glen’s failure to capitalise came back to haunt them within two minutes of the restart when Dale Moore scored from a low Nisbet crossball. Moore’s night came to an abrupt end when he was stretchered off after 54 minutes – both sets of fans applauded as he left the field.

Troon also lost Zack Simpson to a straight red card after he clashed with Andrew, who was substituted shortly after. Both sides had chances going into the final 15 minutes with a Nisbet solo run ending with a shot that was just past the post. 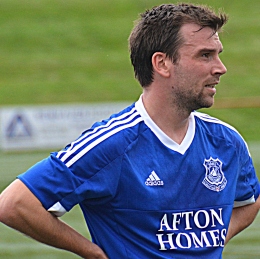 Orsi and Gray then linked up, with Gray’s shot bringing out a good save from Marty Fraser, but the final chapter was still to come. With less than two minutes left, Morgan Brown hand-balled and David Gray made no mistake from the penalty spot.