Both Glenafton and Beith returned to winning ways last Saturday and with only two points separating the sides in the league a close encounter was always on the cards and so it proved.

The visitors were first to show with Andy Reid breaking down the right and winning an early corner-kick which was dealt comfortably by the home defence. Another corner followed on 10 minutes and keeper Brian McGarrity made light work of clutching Marc McShane’s header. On 13 minutes the Glens took the lead with a touch of good fortune. Alain Kinney gathered the ball on the outskirts of the box and held off a couple of defenders before driving into the penalty area and cutting the ball across the face of goal where Nicky Docherty’s attempted clearance cannoned off Darren McGill and the ball looped over the head of keeper Adam Strain and into the net. 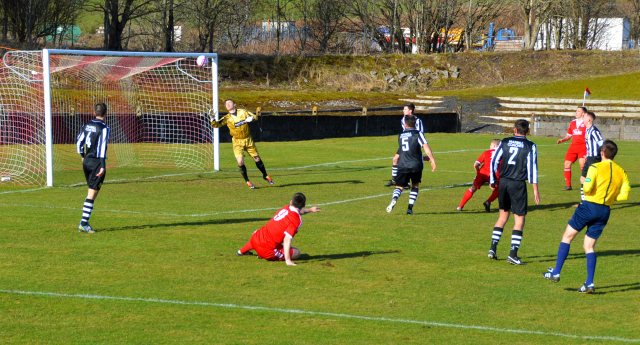 In a scrappy half, peppered with free-kicks, twenty or so minutes passed before the next notable attempt at goal with McGill’s low pile-driver from 22 yards forcing Strain to get down and at full stretch push the ball wide. Aaron Connolly’s header from the resultant corner was blocked by Andy Reid and the danger cleared.

On 37 minutes the home side came close to doubling their advantage after great work by Jamie McKernon. Gathering a flick-on by Kinney in the ‘D’ the midfielder twisted and turned into the box, wrong-footing both Stephen McKeown and Kevin McDonald , before lashing his shot from 12 yards out beyond the reach of the advancing Strain only for the ball whiz wide of the post.

The visitors finished the half with two corners in quick succession won by Sean McKenna and Darren Christie in turn, but the quality of the kicks didn’t match the build-up play. H/T Glens 1 Beith 0

Five minutes into the new half and Ryan McChesney deep in his own half squared to Craig Menzies who surged forward into Beith’s half before picking out Aaaron Connolly. The striker skipped past a couple of defenders before his shot from the edge of the box was deflected wide for a corner-kick which ended with Alain Kinney, sandwiched between two defenders, bulleting a downward header into the net.

Beith responded well and on 55 minutes McGarrity pulled off a strong one-handed save from a close range header by McShane. Four minutes later the keeper got a fist to a glancing header from Reid. The visitors pressure paid off and they pulled one back on 62 minutes. David McGowan pounced on an attempted clearance at the edge of the box and although his clipped shot was blocked by McGarrity the keeper could do little to prevent the incoming Andy Reid from guiding home the loose ball. 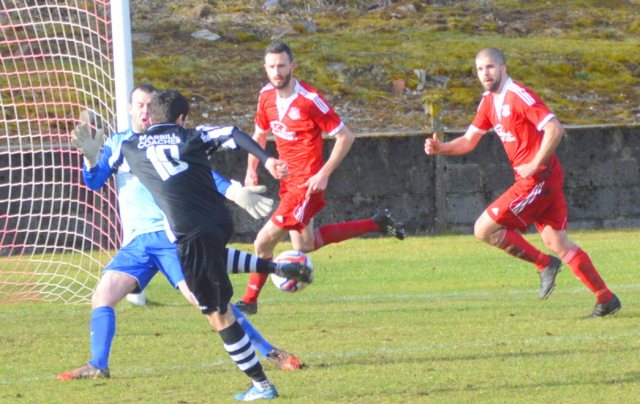 The visitors made a double substitution with Joe Bradley and Kenny McLean coming on for McKenna and Donnelly and with their tails up went in search of the equaliser. McGowan and McLean played a neat one-two at the edge of the box to set up the former with a shot at goal only for McChesney’s sliding tackle to clear the danger.

Straight up the field and a slick passing move involving Daniel Orsi and Connolly set up McGill for an angled shot from the edge of the box which although saved well by Strain the loose ball caused panic in the Beith box and a pass-back to the reluctant keeper. Inevitably the free kick from 7 yards with nine players on the line was blocked, first by Strain and then by four pairs of legs as Orsi tried in vain to bury the rebound. 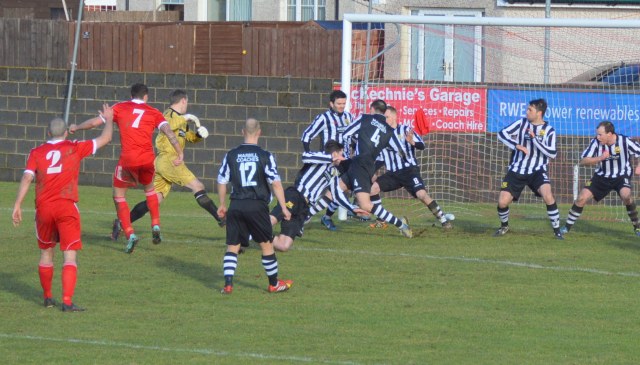 Glens replaced Jamie Hay with Michael Wardrope and play was now flowing much more regularly from end to end albeit still interrupted with a fair number of free-kicks and yellow cards. On 81 minutes Bradley whipped a free-kick deep into the six yard box and McChesney and McGarrity combined as McShane threatened. Initially caught out by the short corner-kick the Glens defence regrouped and Wardrope nicked the ball from the feet McLean in the nick of time. Minutes later and a Beith counter-attack set Bradley tearing down the left before thrashing a wicked ball across the face of goal and inches wide of the far post.

With six minutes to go the Glens came within a whisker of killing the game off after a lung bursting run by Menzies down the right flank before laying the ball off to Kinney who bided his time before rolling the ball at a perfect pace for the overlapping Menzies to gather and continue his run in on goal. Evading the back-tracking Docherty’s tackle his shot for goal was then blocked by the outstretched leg of Strain and the ball sent spinning high in the air to hit off the bar and fall kindly for Reid to clear.

At the other end and with no way through the Glens defence Bradley tried his luck from the edge of the box but his shot dipped over the bar. With four minutes to go Glens brought on Craig McGuffie for Connolly and the young midfielder was soon in the thick of things, but not before Beith drew level a minute later. Bradley picked out McGowan wide on the left and after forcing his way to the bye-line fired the ball across goal where it was met sweetly by Darren Christie and volleyed into the top corner beyond the airborne McGarrity at full stretch.

Beith continued to press and Bradley and McLean both had efforts blocked before the home side almost recovered their lead in time added-on after Kinney’s low angled shot from inside the box was pushed away by Strain before Docherty was on hand to usher the ball out for a corner as McGuffie closed in.

A minute later McGuffie challenged for a high ball into the box and was left pole-axed by Strain’s challenge as the ball bounced inches wide of the empty net and the home side’s forlorn appeals for a penalty dismissed. In the fifth and final minute of added time a Glens free-kicked ended with Kinney forcing his way between defenders again only for his header from 6 yards flashing wide of the post. FT Glens 2 Beith 2