A Letter from Sandy

The club received a letter from former Glenafton goalkeeper Sandy Selkirk addressed to the Glenafton players following their recent excellent run in the Scottish Junior Cup.

Sandy signed up as goalkeeper for Queen of the South in 1956/57, sadly however a serious injury ended his senior career at the end of that season.

In August 1958 he signed for  Glenafton Athletic, then based at Connel Park, and was the first choice goalkeeper in the side that went to win the Western League Championship, Western League Cup and Vernon Trophy treble and finished runners-up in the Irvine & District Cup final.

The following season in their last season at Connel Park  the Glens won the Irvine District Cup. In 1960/61 Glens moved to Loch Park and went on to win the Western League (South Section) and enjoyed a good run in the Scottish Junior Cup , only to lose out at the Quarter-Final stage, after two replays. Sandy suffered a serious shoulder injury and made a limited number of appearances.

He stayed with the club until season 1963/64, enjoying the glory years at the Glens when they became the first team (outwith the War Years) to win the Western League Championship 3 years in a row .

Here’s the letter from Sandy

I am sorry I was unable to come up to Scotland for your cup final on Sunday. Having lived here in the south of England for nearly 30 years we do not get much info about the Scottish, especially the Juniors. So I did not know until the week-end the Glens lads were in the Junior Cup final and it was too late for me at my age to get up there.

You are all obviously very disappointed that you did not come out on top and I share that disappointment with you. Nevertheless you should all be proud to teach the final in the first place as we all know the Junior Cup is one of the most difficult competitions to achieve that feat.

Having been part of the great Glens team of the late 1950s’ and early 60s I know more than most just how gutted you will be feeling as we lost to Irvine Meadow in the final at Hampden in the early sixties.

Still it remains one of my fondest memories in football. I did not play in the final as my career was coming to an end because of a constantly dislocating shoulder. Roger Niven was the first choice goalkeeper, so my disappointment was twofold – not playing and losing.
However Glenafton Athletic was very good to me. I did not qualify for a medal, as there no subs in those days, but the club presented me with a specially inscribed cup for the final, which I still treasure. That is just the type that I and now you play for.

I also fondly remember the camaraderie of all the old players including Danny McCulloch, Laurie Moffat and Jock McKenzie, Roy Douglas, Johnny McNaught, Eddie Brennan and the rest. Then there are the great Glens fans and the community of New Cumnock. My wife Jean and I remember all the great nights of celebration we had in those days. I am sure you guys had at the weekend.

So my great memories are simply;

I wish you all the very best,
Alex (Sandy) Selkirk

The Glens side that defeated Darvel 3-2 in the last game of the Western League (South) campaign and then went on to beat newly crowned Scottish Junior Cup winners Irvine Meadow in the Championship decider to clinch the Western League title. 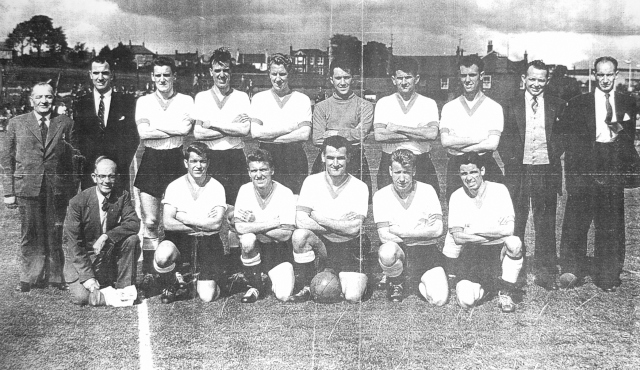 The Glenafton side line up for the first game at Loch Park. A 3-2 win over Cumnock Juniors set them on their way to win the Western League (South Section) 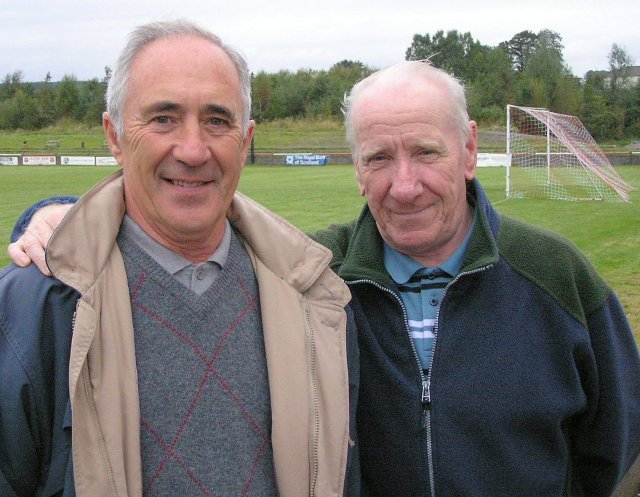 Goalkeeper Sandy and goal-machine Danny meet up at Loch Park in September 2007.

This entry was posted in GAFC Feature and tagged Glenafton Athletic, New Cumnock, Scottish Junior Football. Bookmark the permalink.
%d bloggers like this: