Glenafton line up at Rugby Park

Glenafton Athletic’s dream run in the Scottish Junior Cup ended in defeat to red hot favourites Hurlford United in the final at rain soaked Rugby Park, Kilmarnock. After 30 minutes the New Cumnock side found themselves behind after conceding two spot kicks that were duly converted and a man down. The ten men lost a third goal from time as Hurlford went on to win the Holy Grail of junior football for the first time in the club’s history. While the Blair Park side celebrated their fantastic achievement the crestfallen players and management of Glenafton were soon uplifted by an overwhelming ovation of chanting and cheering from the rank and file of an appreciative #Afton Army.

Glenafton kicked off and were immediately on the front foot with a couple of quick attacks that were stunted at the edge of the ‘Ford box. The first ended after Alain Kinney was penalised for a high foot as Glen Mitchell attempted to head the ball clear and the second after the arm of Mark Brown blocked a flick on by Aaron Connolly, the infringement unnoticed by the match official.
On 2 minutes a third Afton attack was broken down and the ball fell to Paul McKenzie in the centre circle who clipped it between the Glens’ central defenders for Ross Robertson to chase into the box and as the back tracking Ryan McChesney caught up his former team-mate went down in the box. The referee adjudged contact had been made and pointed to the spot before booking McChesney. After the dust settled Stewart Kean stepped up and poetic justice appeared to have been served, if only momentarily, when his spot-kick hit off the inside of the post before nestling in the net to put Hurlford ahead after 3 minutes.

Glens composed themselves and responded quickly when Alan Cairns deep on the left flank lofted a long ball upfield where it was trapped by Kinney before he wheeled and shook off Paul Byrne to chip the ball into the box for Cameron Marlow, only for his angled header from 8 yards out to be well saved by Ally Brown. Soon after, the keeper mopped up the first corner kick of the game with ease.

At the other end from tight on the left flank, overlapping full back Paul Byrne fired the ball across the face of goal for Kean, but with Craig Menzies in close call, the striker on the six yard line ballooned his shot over the bar.

In a slick passing movement initiated in the centre circle by Jamie McGeoghegan and propagated by both Findlay Frye and Connolly who picked out Marlow down the left. The midfielder then played a one-two with Kinney before crossing for Connolly, only for Brown to punch the ball clear. On ten minutes Frye’s name went into the book after a late tackle on Jamie Wilson and Robertson was fortunate not to join him five minutes later after a nasty challenge from behind on McChesney. The impressive Kinney killed the ball brilliantly before threading the ball for Jamie McKernon’s run into the box but his cut-back for Connolly was well read and then cleared by Mark Brown.

On 18 minutes Marlow became the third Glens’ player to receive a yellow card following a foul on McKenzie. From the resultant free-kick Hurlford won a corner which was headed clear at the near post only for the ball to arrive at the back post where Robertson’s attempt to place a header home ended on the roof of the net.

A string of passes, with Kinney again the lynch pin, saw the Glens move the ball from the right to left flank and Cairns lob into the box was headed back by Marlow for Connolly but he sliced his shot well wide of target. Midway through the half Kinney was sandwiched between the Mitchell brothers and from the free kick McKernon thundered the ball inches wide from 30 yards out.

Byrne made good progress down the left before picking out Callum Watt in the box who played a neat one-two with Danny Mitchell before shooting for goal only for Menzies to block and then keeper Brian McGarrity deny Kean from poking the loose ball home from 6 yards. Hurlford pressed again and Kean’s header from the middle of the park set Robertson free to run in on goal with McChesney in pursuit. On the outskirts of the box the young defender’s hand brushed the striker’s shoulder enough to send him sprawling to the ground before the ball was safe in the hands of McGarrity. Following McChesney’s red card and a yellow for McGarrity the spot-kick was slammed home by Kean to double Hurlford’s lead on 30 minutes.

Again Glenafton, now 10 in number, gathered themselves and stood firm with McGeoghegan dropping back from midfield to the centre of defence. Five minutes before the break Wilson burst into the box between Cairns and McKernon and having lost control of the ball opted to brush against the latter before tumbling to the ground. Lacking the guile of Robertson the midfielder left the referee little option but to break his duck and book a Hurlford player, ironically for diving. H/T Glenafton 0 Hurlford 2

Ford flew out the traps and created a handful of excellent chances in the opening eight minutes of the new half. The first came within 30 seconds when a Danny Mitchell drive from the edge of the box was superbly pushed behind by McGarrity. Soon after Robertson rampaged his way into the box before flashing the ball across the face of goal where McGeoghegan’s clearance cannoned off the chest of McGarrity and just as Kean seemed certain to score from 4 yards out, an alert Frye forced the ball to safety with a brave tackle.

On 50 minutes, after a fine passage of passing play down the right, Cameron crafted a superb ball to the back post where Kean, eager for his hat-trick, got between two defenders but his powerful downward header ricocheted off the Rugby park surface and over MGarrity’s bar – the prolific striker struggling to repeat his successes from 12 yards. Three minutes later a Hurlford corner-kick was headed well clear of the box, only for the ball to be met sweetly by Wilson and thrashed goalward from 30 yards out but again McGarrity pulled off another fine save. The keeper, a clear contender for man-of-the-match, then made a more comfortable save after Robertson couldn’t match his excellent build up play with a close range low angled shot that lacked power.

Some respite for the 10 men in white and red as they enjoyed a bit of a purple patch. On 55 minutes Kinney weaved his way past Glen Mitchell into the box and then turned Byrne outside, only for Mitchell to recover the situation and poke the ball from the feet of the Glens’ striker as he set up to shoot from the corner of the six yard box. The resultant corner came to nothing but the Glens quickly regained possession at the centre circle through McGeoghegan who quickly picked out Marlow and although his one-two with Kinney was intercepted at the edge of the box, Frye quickly recovered the ball and when his blast from 20 yards appeared to strike Mark Brown on the arm, shouts for a penalty rang out but fell on deaf ears.

Undeterred McEwan won the ball back in the middle of the park, drove forward and picked out McKernon who in turn found Marlow and in a flash he turned a defender before rolling the ball into box for the incoming McEwan, but with Byrne closing in, Southy sliced his shot wide of target. Glenafton’s fight-back prompted Hurlford to introduce fresh legs, with Steven Masterton replacing Jamie Wilson.

On 64 minutes Marlow capitalised on a slip by Masterton and stole the ball before releasing Kinney on the left hand side of the penalty box who smacked the ball first time forcing Brown to pull off a fine save at his near post. Two minutes later a Robertson corner kick was met at the near post by Kean but his flick on was well held by McGarrity.

Glenafton introduced Stevie Miller with Cameron Marlow leaving to a well-earned reception from the Afton Army, still in good voice. Masterton’s name went in the book after taking Connolly out of play. Minutes later the Glens striker collected a cute lay-off from Kinney on the half-way line and quickly dispatched the ball to McKernon before continuing his run upfield to gather than one-two. After shaking off the attention of Watt and Glen Mitchell and forcing his way deep into the box and with Cameron closing in he fired for goal only for Brown to pull a point-blank save and push the ball behind.

The corner-kick was headed clear and the ball picked up by McKenzie who sprinted up the right with McGeoghegan in pursuit, the Glens defender getting a touch on the ball and as McKenzie tried to regain possession he took the incoming Cairns out of play with a challenge that on another day may have merited more than the yellow card flashed his way. 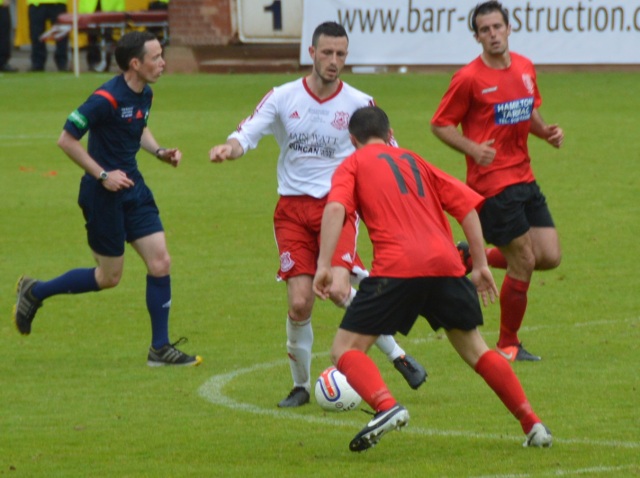 With 10 minutes to go striker Michael Reilly replaced Alan Cairns, with the New Cumnock support showing their appreciation for the young defender’s contribution. At the same time Hurlford replaced Ross Robertson with John Dempster and within a minute the substitute won his side a corner kick which was floated to the near post for Paul McKenzie to glance home a header; 3-0.

McEwan was booked for taking Watt down as he made for the box and Masterton crashed the subsequent free-kick off the base of the post. During the closing minutes Aaron Connolly left to a huge cheer from a defiant Glenafton support to be replaced by Darren McGill and the young midfielder was soon in the thick of it with a trademark run that was ended by a shirt pull from Byrne.

The final substitution of the match saw Callum Watt replaced by Jack Steele, the sixth former Glenafton player to feature for ‘Ford in the final and that had made the switch to Blair Park this season. In the final seconds of regulation time the tireless Alain Kinney won the gallant ten men another corner kick, two minutes later the final whistle heralded great scenes of delight for Hurlford United – players, management and supporters – as they celebrated an historic win. FT Glenafton 0 Hurlford 3