Glenafton began with the same starting eleven that knocked Shotts Bon Accord out the Scottish Junior Cup in a pulsating match at Loch Park last Saturday for the visit of league leaders Auchinleck Talbot.

The home side made a nervy start and in the opening minutes keeper Brian McGarrity had to deal with a pass back hit with some pace and then rush to the edge of the box to deny Keir Milliken a sniff at goal.  With less than three minutes of the game gone the Talbot striker was heading back to the pavilion after a reckless challenge on Craig Menzies, catching the Glen’s captain with a high flying boot as he tried to head the ball back upfield.

Those coming late into Loch Park would have been hard pushed to recognise the Glens had a man advantage as the 10 men of Talbot knuckled down and were quick to hustle their opponents off the ball.  The visitors were creating the few openings of any note, Gormley and Colin Spence combining well, but without testing the keeper.

On 20 minutes Glens broke down the right flank with Aaron Connolly getting the better of Ally Park before cutting the ball into the box for Cameron Marlow only for Martin McGoldrick to cut out the danger at the corner of the six yard box.  Andy Leishman then rushed from his line to beat Marlow to a ball into the box and soon after the Glens midfielder’s good work down the left ended with Craig Pettigrew cutting out his cross at the near post.

Just as Glenafton had started to show their teeth back came Auchinleck to bite them on the ‘bot.  Gormley engineered his way into the box and with his way to goal blocked by a host of red shirts he touched the ball to James Latta, seemingly placing his team-mate in the same predicament.  A tangle of legs followed ending with Latta on the ground, Jamie McGeoghan penalised and a spot-kick awarded which was leathered home by David Gormley with 27 minutes gone. 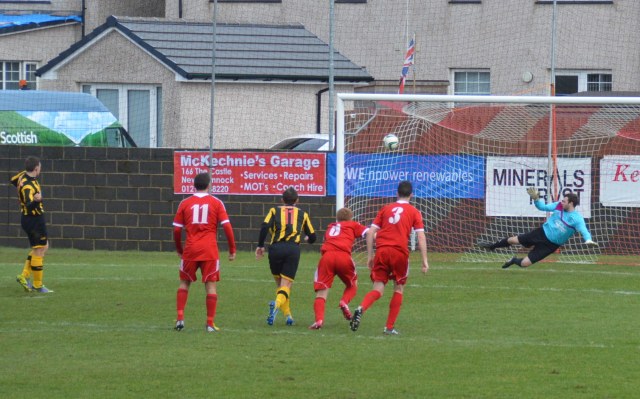 David Gormley scores from the spot

Glenafton rallied and a neat one two by Kinney and Marlow by-passed Pettigrew only for Willie Lyle with a timely tackle rob Marlow in the box. Soon after, ten minutes from the break,  Marlow skipped past John White and drove into the box before drilling a low shot from 8 yards out which although went through Leishman’s legs, the ball’s pace had been killed giving the big keeper time to swivel and smother the ball. 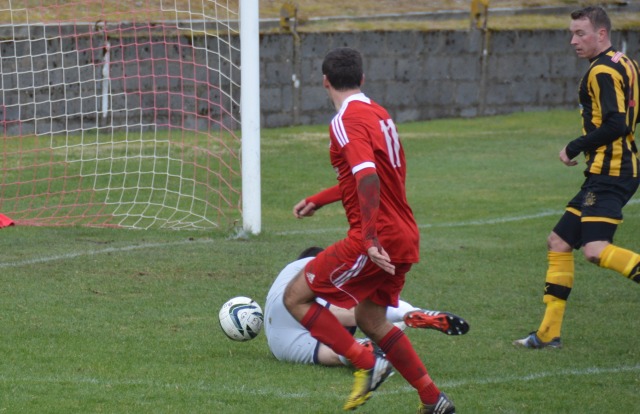 No luck for Cammy

Five minutes later the home side won a free kick short of 30 yards from goal and although Connolly’s effort beat the Talbot wall the ball sailed over the bar. At the other end Gormley’s shot from open play at the corner of the penalty box suffered the same fate. The half ended with Talbot on the front foot but following a short game of head tennis in the Glens box, the defence cleared their lines. HT Glens 0 Auchinleck 1

The Glens were first to press and although their play earned a number of set pieces they struggled to convert these into any serious efforts on target; a malaise endured equally by their opponents.

Indeed, it was defender Craig Pettigrew that had the travelling support cooing as he gathered the ball deep in his own half and plundered his way upfield, brushing red shirts aside one by one to arrive at edge of the Glens’ box but the final pass failed to find a Talbot forward and McGarrity mopped it up.  The keeper later comfortably clutched a Spence shot from the edge of the box. 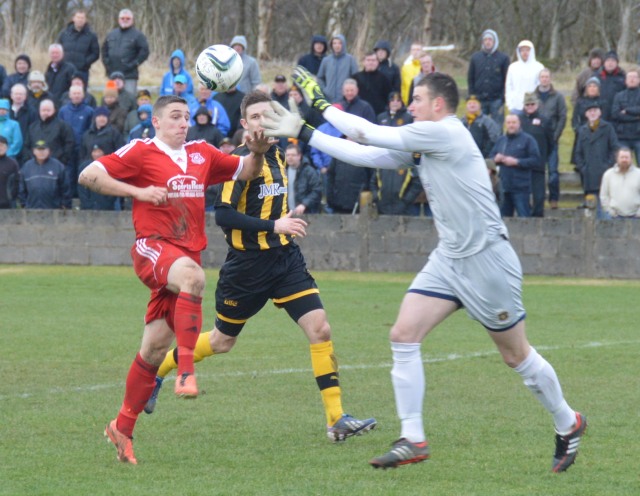 Aaron loses out to Andy

At the other end, a Craig McEwan cross into the box was miscued by Latta and flew over Leishman’s head and the bar but again the resultant corner-kick came to nothing.  A high ball into the box saw Connolly get the jump on McGoldrick and Pettigrew but the alert Leishman was already well placed to collect the ball comfortably.

Talbot responded with a slick passing move that ended with Gormley feeding McGoldrick wide on the right and although the latter’s cross was blocked, the former’s run into the box was impeded by Frye, earning Talbot a free kick 20 yards outs. Although Gormley’s effort beat the ball it lacked any power to concern McGarrity. 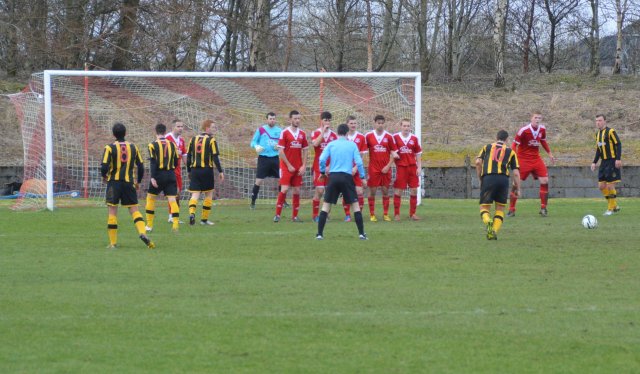 Leishman was back in action having to desert his box to close down Connolly on the right flank. With 10 minutes to go Connolly made good progress down the other flank leaving Pettigrew in his wake but he couldn’t shake off man-of-the-match McGoldrick and the Glens man subsequent tumble in the box was adjudged to be a dive, earning him a yellow-card – one of five flashed to the home team during the second half.

At the other end, a cross from the right from the unusually quiet Bryan Young was only partially cleared by Ryan McChesney as Latta waited to pounce and the loose ball then punched out by McGarrity as substitute Graham Wilson threatened. McGarrity mopped up the corner-kick unchallenged at the back post.

Straight up the park and the tireless Connolly slipped a neat ball for Reilly to get behind the Talbot defence but yet again Leishman’s positional play was exemplary as he rushed to bravely dive at the feet of his former team-mate and push the ball to safety. FT Glens 0 Auchinleck 1