Local derbies are often tense and heated affairs and although the league clash between Cumnock and Glenafton was littered with yellow cards and three red cards the match was far from the proverbial ‘dirty’ game. Similarly the final score-line, 2-1 in favour of the visitors, perhaps didn’t truly reflect the Glens superiority in terms of creating the best of the goal-scoring chances.

Glenafton created the first decent chance of the game on 7 minutes when a head-flick by Alain Kinney was gathered in the box by Cameron Marlow only for his attempt to lob the ball over the outrushing Ally Semple denied by a fantastic finger tipped save from the keeper.

The hosts responded with a drive from the edge of the box by Robert Love which flew wide of the post, albeit keeper Brian McGarrity had the goal well covered in any case. Soon after McGarrity showed a clean and safe pair of hands to clutch a header from Keiran Woods – a sign of things to come as the Glens keeper handling proved to be immaculate throughout the match.

On the quarter hour mark Kinney again fended off the home defence and tried to pick out Connolly’s run into the box only for Semple to win the race for the ball. Two minutes later Connolly turned provider after a determined run to the goal-line and a cut-back for Findlay Frye but Ray Montgomerie timed his tackle to perfection and the chance was gone. A Connolly free-kick from the edge of the box was then clutched firmly under the bar by Semple.

On 20 minutes Cumnock conceded another free-kick at the edge of the box after Wood brought down Connolly.  Jamie McKernon lined up apparently to curl it beyond the wall but instead calmly rolled the ball into the box for Alain Kinney who blasted the ball goal-ward only for Semple to pull off a stunning point blank save and have the presence of mind to smother the rebound as a posse of red shirts waited to pounce.

Cumnock had the ball in the net on 26 minutes but Love was well offside deep in the box when receiving a through pass from Paul McInnes. Two minutes later, in the move of the half, Kinney left McInnes and Gary McMenamin for dead on the half-way line before finding Frye with an exquisite pass and the tireless midfielder stormed to edge of the box with Chris McKnight in pursuit before slipping the ball to right for the incoming Connolly and although his first time shot beat Semple the ball soared inches over the bar.

The game began to get bogged down with play being regularly disrupted for free-kicks some of which were accompanied by the brandishing of yellow cards at a frequency that seemed unnecessary.  In any case neither side conjured up any further clear cut chances and the half ended goal-less. HT Cumnock 0 Glenafton 0

With 3 minutes of the new half gone the home side showed their teeth at last with a McMenamin free-kick from the corner of the box which McGarrity pushed onto the inside of the post and then bravely grabbed the loose ball as Wood threatened. 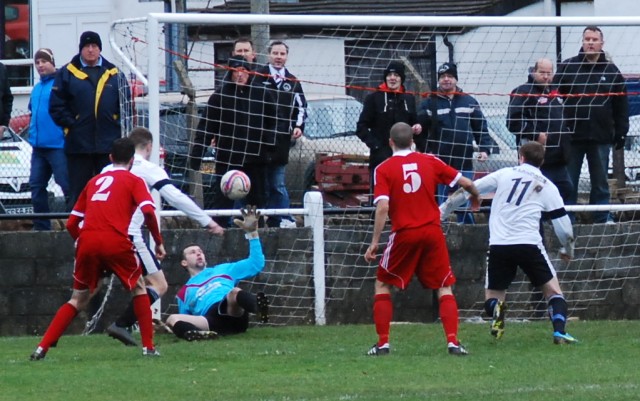 Glens responded with Jamie McGeoghan and John Craig combining on the right and the latter’s cross finding Connolly at the back post only for his shot to be pushed out for a corner by Semple; the former Cumnock striker yet to get the better of the former Glenafton keeper.

However, on 55 minutes Connolly was cock-a-hoop . Craig sold McMenamin a delicious dummy before picking out Connolly down the right flank with perfectly weighted pass and the striker’s glorious cross from the right whipped to the back post was met by Findlay Frye and his delightful downward header nestled in the corner of the net with Semple rooted on his line. 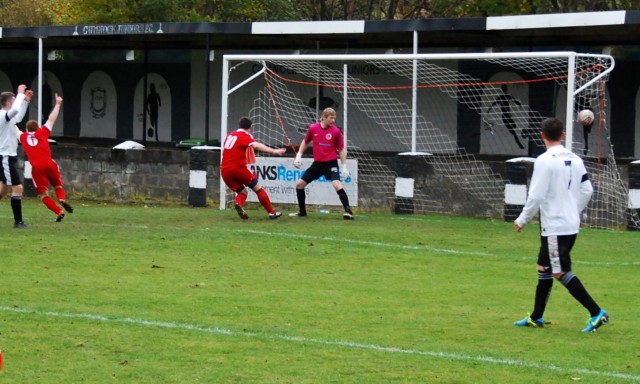 Yellow cards continued to be flashed and on 63 minutes John Craig earned his second of the match as he challenged McMenamin for a 50:50 ball in the middle of the park.  The home side took heart and forced a corner-kick only for McGarrity’s unflappable handling to deny them again. 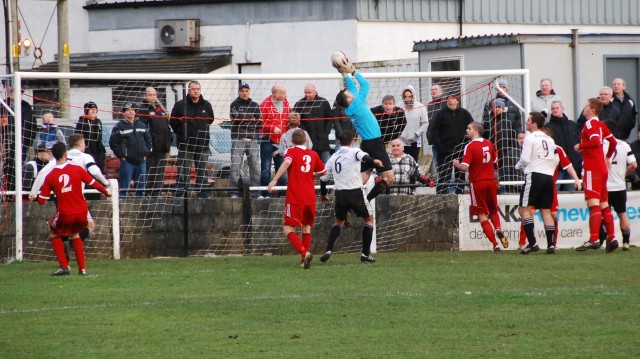 Midway through the half 10 man Glens shuffled the pack with Aaron Connolly leaving to great applause from the travelling support after another tireless shift with midfielder Stevie Miller his replacement.  Four minutes later it was ten-a-side after a series of tackles of the right flank ended with Cumnock substitute Stephen Maguire shown a straight red card for his flying tackle on Craig Menzies.

With parity restored the visitors came close to doubling their lead after Kinney’s header from a narrow angle crashed off the outside of the post. The loose ball recovered by the Glens and returned to Kinney to slot home, but not before the offside flag was waved.

Glenafton continued to press and as McKnight and Richard Hanvey tried in vain to clear their lines the latter adjudged ti have tripped Frye as he shot for goal from the outskirts of the box; earning him his second yellow card and reducing Cumnock to 9 men. Miller blasted the resultant free-kick just wide of target much to the relief of Semple.

Kinney then powered his way beyond McKnight into the box and on reaching the bye-line whipped the ball across the face of goal, taking McMenamim, Semple and James Lundie out of the game, leaving the incoming Cameron Marlow free to tap the ball home at the far post and double the Glens lead with 12 minutes remaining.

Thoughts of comfortably seeing the game out with an extra man quickly vanished two minutes later when Cumnock at last showed a touch of guile in the box with Robert Love’s  deft touch clipping the  ball from an acute angle beyond the reach of McGarrity.

Kinney continued to haunt the home defence and yet another forceful run saw him skin McMenamin on the right flank and drive along the bye line only to be stopped at the base of the post by Wood at the expense of a corner-kick, which came to nothing. At the other end McGarrity soared again to clutch a Cumnock corner.

In the last minute of regulation time substitute Craig Brown ghosted into the Cumnock box and with the advancing Semple to beat fired just wide of target.  Deep into the four minutes of added time striker John Bradford was left with his hands on head as a half-chance went a-begging and the ball comforted in the safe and reliable hands of keeper Brian McGarrity. F/T Cumnock 1 Glenafton 2