Glenafton got off to the perfect start against league leaders Petershill with a goal in four minutes after Paul McKenzie menaced his way into the box and played a neat one-two with Ross Robertson before firing for goal with the ball deflecting off Ryan Jordan beyond the reach of keeper Michael White. 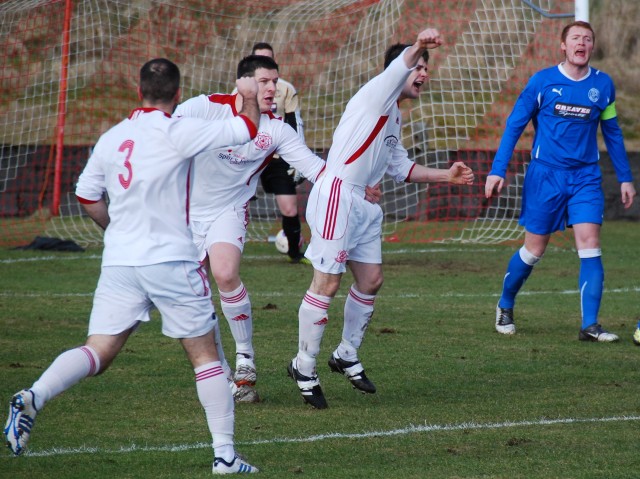 Four minutes later Ross Robertson looked to have doubled the home side’s lead when from a Gareth Campbell corner kick he beat Jordan to the ball at the back post and guided it home by way of the other post, only for the goal to be disallowed for some infringement. 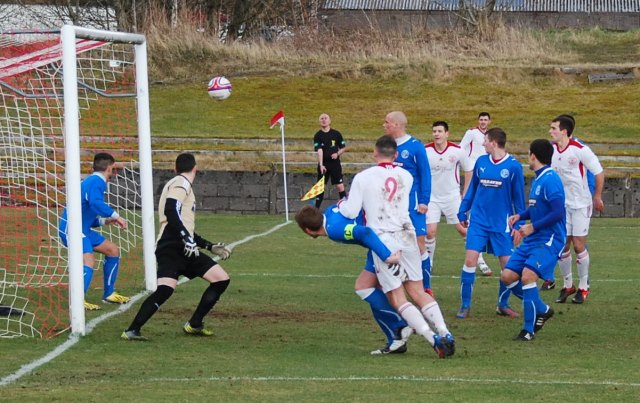 The Glens were dominating the middle of the park with Craig Potter and Danny Mitchell breaking down Peasy moves and McKenzie picking up the pieces to initiate home attacks. Another corner kick beat the outstretched arm of White but Jordan was on hand to head over his own bar as Robertson threatened at the back post.

On 18 minutes Petershill conjured up their first serious attempt at goal after winning a free kick at the edge of the box. Sean McKenna’s determination against Potter and Glen Mitchell ended with the latter penalised as he tried to retrieve the ball from the grounded Peasy striker, an action that ended with Stephen O’Keane  receiving a yellow card for kicking out at Mitchell. Back to the football and Ryan Craig’s sweetly struck kick beat the wall and all but grazed the junction of the post and bar with Ally Semple beaten. Soon after, the keeper did well to punch clear a corner kick as Peasy pushed for the equaliser.

Back came Glenafton and on 26 minutes Craig McEwan’s pass caught the Peasey defence flat-footed allowing John Dempster to break into the box only to be denied by the fleet-footed White who rushed from his line and made an excellent block. A minute later Robertson in the centre circle picked out Craig Menzies on the right flank and he combined well with Dempster who in turn saw off the attention of Danny Smart at the corner flag to fire the ball to the back post where Robertson rushed in ahead of Ross McCabe to bullet the header past White.  But again, the goal was disallowed after Dempster’s cross was adjudged to have gone out of play. Three minutes later Robertson beat McCabe in the air again but his header sailed over the bar.

Glens continued to dominate play and there was little respite for the beleaguered Peasy defence as the home side pushed for a second but White’s goal remained intact to the break. There were a few glimpses of attacking play from the visitors the best of which ended with a timely tackle by Glen Mitchell bringing a fine run by O’Keane to an end deep in the box. H/T Glens 1 Peasy 0

The visitors were first to show and two minutes after the restart earned a free kick on the edge of the box but on this occasion Craig’s effort battered off the wall.  A minute later Menzie’s cross to the back post saw Robertson rise bravely to beat McCabe and White to the ball and his header go narrowly wide. Back up the park and the home side for the first time in the match put the Glens’ goal under a sustained period of pressure.  Robertson headed clear a free kick deep in his own box. Soon after Semple narrowed the angle and made a stunning save from a Paul Woods strike from the corner of the six yard box. The loose ball fell to Liam Finnigan who looked certain to blast it home from a few yards out only for Ryan McChesney to launch himself into its path and repel the danger.

The game evolved into a much more even contest as play swung from end to end. On 56 minutes Robertson from 25 yards out curled a free kick over the Peasy wall and White was pleased to see it whiz wide of the post as he scurried across his line. Ten minutes later, after the sides had traded a series of corner kicks and half-chances, a Robertson shot from the edge of the box beat White but the ball crashed off the post and was smartly cleared by Graham Girvan. Two minutes later a fine run down the right by McKenna was halted by an equally fine tackle from Potter on the dead ball line as substitute Stephen McGladrigan threatened to pounce on the cut-back. At the other end Dempster engineered his way behind the visitors’ defence but McCabe kept a cool head to mop up that cut-back.

With 15 minutes to go bothteams introduced fresh legs with Bobby Colligan and Richie McKillen replacing Gareth Campbell and Craig Menzies for the home side. The legs of Paul McKenzie motored down the left as the Glens cleared a corner kick and try as he might the back tracking Jordan couldn’t catch the tigerish midfielder as he homed in on the Peasy box before pushing the ball right for Roberston whose low drilled powerful shot was held well by White, albeit at the second attempt. After another lung-bursting run and with three minutes to go McKenzie was replaced with Gus Cochrane and left the park to a great reception from the home support.

On 88 minutes White pulled off another fine save after Dempster carved out an opening to curl a shot beyond the Peasy central defenders from the edge of the box.  A minute later a frustrated Jordan Murch broke down a Glens break away and was already heading for the clubhouse as the referee prepared to administer a second yellow card.

Five minutes into added time McChesney made another fearless block as McKenna fired for goal. The resultant corner was met cleanly by the head of Ryan Jordan and yet with two defenders between him and the Peasy captain Ally Semple somehow got an outstretched arm and strong hand to the ball on the line and John Dempster kept a cool head to hook the loose ball to safety.  F/T Glens 1 Peasy 0