Almost a season separates this meeting of Talbot and Glenafton and the previous one back in August when the visitors humbled their hosts by inflicting a hefty 4-1 hammering. Now as then, the sun again bathed the Beechwood baize giving some credence to the local appellation of ‘God’s Little Acre’, albeit a name coined in that best Boswellian tradition of ‘taking critical liberties’.  Summer football however has its drawbacks and the ‘Malahide midgies’ temporarily abandoned their habitat on the Kirkland Green to descend upon the terraces in Goudie-esque numbers.  Unlike the pit-bull terrier that ‘invaded’ the pitch on a couple of occasions their bite proved to be worse than their bark.

The Glens were first to show their teeth with a shot by Paul McKenzie stinging the hands of keeper Brian McGarrity in the opening minute. Three minutes later Mick McCann came within a whisker of putting the home side ahead but just failed to get his head on the ball a few yards from the goal-line. Soon after the former Meadow striker cracked a shot off Semple’s near post from close range.

On 26 minutes Bobby Colligan flicked the ball over Gordon Pope’s head and into the box for John Dempster to gather. Leaving Gavin Collins for dead he then evaded the back-tracking Craig Pettigrew before getting his shot away only for McGarrity to drop down low and knee the ball out at the expense of a corner; the keeper then mopping this up punching the ball clear from Gareth Campbell’s head. Two minutes later McCann was released down the right and after showing the Glens’ back line a clean pair of heels he fired for goal from an acute angle but Semple blocked well and clutched the rebound to safety. McCann’s perseverance finally paid off and on 31  he wheeled on the goal line to blast a wicked corner kick into the roof of the net, converting probably the most difficult of his chances with some aplomb.

The visitors responded strongly and Gareth Campbell, on for the injured Craig Potter, tested McGarrity with a low shot from the corner of the six yard box but once again the keeper’s knee (one of them) was put to good use. Glenafton upped the tempo and made several raids into the Talbot box. On 38 minutes Craig Menzies dispossessed Colin Spence and burst into the box and wrong footed Pope before squaring the ball to Armstrong who hit it first time from the penalty spot but once again the alert McGarrity had the measure of his opponent and having advanced to the six yard line trapped the ball dead between his feet.

The keeper however was less keen to handle the pit-bull terrier that wandered into the penalty area and it was left to Bo-w Armstrong to collar the invader. Four minutes before the break it was the turn of Glenafton’s terrier Paul ‘Taz’ McKenzie to cause panic in the Auchinleck rear guard and draw the sides level . It began with Armstrong rising to beat Collins and head the ball on to Dempster who perplexed Pettigrew and Pope before picking out McKenzie deep in the box albeit surrounded by black and gold shirts. A few Taz twists and turns had Steven White chasing the lengthening shadows and tempted Rikki Robb into a last ditch lunge but too late his low drive from 10 yards out was already net bound.

Taz tucks it away 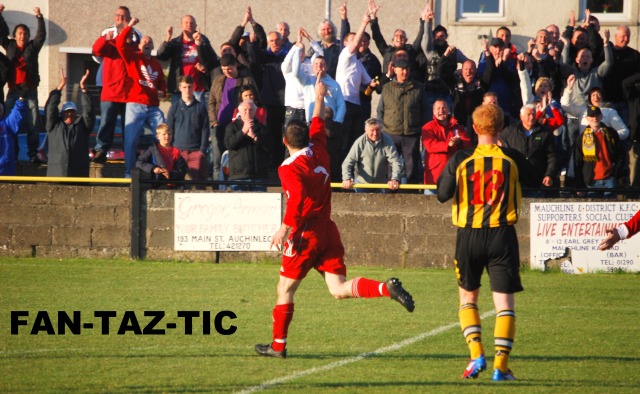 A minute later McGarrity had to rush from his line to punch the ball from Armstrong’s head and as Campbell collected the loose ball he was bundled to the ground by former Afton defender Robb but the appeals for the penalty were waved away. Just before the break Collins timed his tackle perfectly after Colligan skinned Pope and raced for goal. H/T Talbot 1 Glens 1

The second half proved to be an end-to-end affair and although engrossing it fell short of the first forty-five in respect of goalmouth action.  Glenafton’s best chance fell midway through the half after McKenzie broke free from Ally Park to take the ball to the bye-line and whip in a vicious cross for Campbell to rise above Collins and Pope but although his header appeared destined for the corner of the net, McGarrity thought otherwise and dived full stretch to push the ball wide of its target. 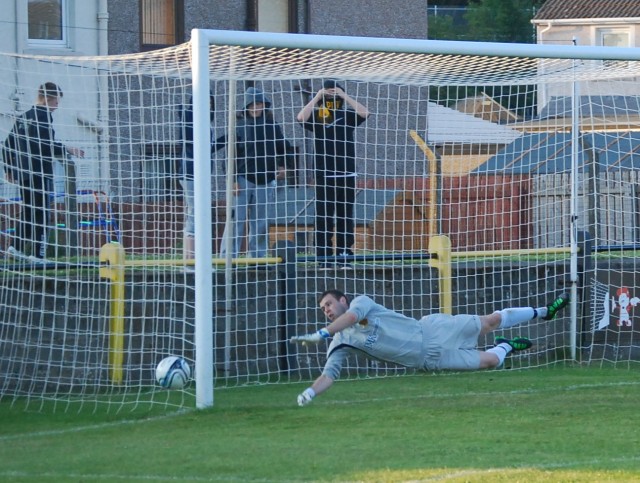 Minutes later at the other end substitute David Gillies looked certain to score but instead blasted the ball into the side-netting from a few yards out. The last decent chance of the game fell to Talbot with two minutes to go with a cracking shot from Martin McGoldrick and an equally impressive save from Semple. F/T Talbot 1 Glens 1

Ally Semple got his hands to penalty kick specialist Gordon Pope’s attempt but still the ball found its way into the net to put the Talbot one up. Gareth Campbell almost burst the net to level the scores. Man-of-the-match Brian McGarrity saved consecutive kicks from Bobby Colligan and Ian Cashmore and with David Gillies and Kyle Faulds having converted their kicks Martin McGoldrick stepped up and blasted home the winning kick.

The game brings Glenafton season’s to a conclusion with promotion to the Premier Division in the bag and still an outside chance of the title.  Throughout the season the team has had the opportunity to face a number of Premier sides – Auchinleck (2), Beith, Clydebank, Cumnock, Irvine Meadow and Pollok and given a good account of themselves and look forward to returning to God’s Little Acre on league business next season, midgies or not.