After thirty starts and two appearances from the bench (both in Ayrshire Cup ties) Paul McKenzie missed his first game after failing to recover from the bad knock sustained in the victory of Lanark on Saturday. The marked improvement in the strength from the bench saw top goalscorer Gareth Armstrong, having recovered from injury too, return to the starting line-up. In a first half devoid of real chances for the home side it was visitors Hurlford that looked more likely to break the deadlock, and indeed only two point blank saves by Ally Semple prevented the Blair Park side from going in at the break ahead. H/T Glens 0 Hurlford 0

The half-time oranges served in the home dressing room certainly added a much needed zing to Glenafton’s play and within 10 minutes of the re-start John Dempster drilled the ball low into the corner of the net after a Richie McKillen free-kick from outside the box was laid off to the striker by Gareth Armstrong. Now firing on all cylinders the Glens looked hungry for more and soon doubled their lead, but in the strangest of circumstances. Gareth Armstrong nominated to return the ball to Hurlford after a clash of heads on the half-way line, pointed to keeper David Markey alerting him of his attentions and hit a trundler straight to him, but somehow the hapless goalie contrived to let the ball roll into the net. The referee had no option but to let the goal stand.  Hurlford kicked-off and headed up field where Ally Semple made no attempt to stop their shot at goal, but the ball flew wide of target!

Midway through the half a Hurlford attack down the left flank was quickly snuffed out and the ball played infield to Paul Murphy. The midfielder motored down the middle of the park leaving the visitors’ midfield in his wake and their defence backing off  before slipping the ball out to the right for Dempster running into the box who lofted it to the back post where the incoming Gareth Armstrong to bullet home a header. 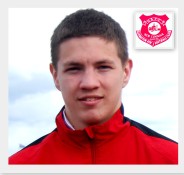 With 8 minutes to go Murphy again was the instigator with a powerful run before playing a picture perfect one-two with Dempster lurking on the edge of the box and taking the return ball across the 18 yard line to play what seemed to be another one-two with Bobby Colligan. Instead the youngster stepped over the ball, his shuffle leaving his marker for dead, then drew keeper and slotted the ball home for first Glenafton goal – one to remember. A half to forget for Hurlford ended with John Craig taking not such an early bath. F/T Glens 4 Hurlford 0