Gareth Armstrong gave the Glens a first half lead at Blair Park before Hurlford drew level from the penalty spot, after a Willie Howie handball, just before the hour mark. The Glens were reduced to 10 men in the closing minutes following Armstrong’s second yellow card and the game drew to a close with the sides settling for a share of the points. 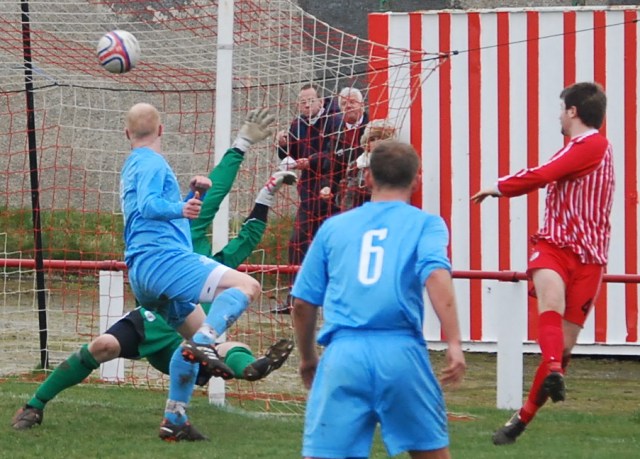 Bo bags one at Blair Park

The home league game against Annbank was one of only three league games that survived an early-March snowfall. Gareth Armstrong made it three goals in three games as he gave the Glens a first half lead. The home side were reduced to 10 men soon after the break when trialist Robbie Henderson collected a pair of yellow cards. Armstrong allayed any fears of a Bankies comeback by completing his hat-trick and after the Glens were reduced to 9 men (following Paul McKenzie’s straight red card), Bo added a fourth.

Cup football took centre stage beginning with the Ayrshire Weekly Press Cup 1st round match at home to Ayrshire District side Troon. A first half strike by Paul McInnes in a keenly fought contest was enough to settle the tie in favour of the Glens.  New signing Robbie Henderson made his debut in the West of Scotland Cup 2nd round against Auchinleck at Loch Park. In another close encounter the Premier side progressed to the 3rd round courtesy of a David Gillies freak goal and a second from Brian Young in injury time; Steven Greenlees shown a second yellow for trying to stop the Talbot man on way to goal.

Despite collecting four points from two league games the month closed with the Glens sitting 8th in the league (W5 D6 L5), 11 points behind leaders Clydebank and 7 points behind second placed Whitletts, with Girvan a point further back in third place. Of greater concern only four points separated the Loch Park side from the relegation zone, where Vale of Clyde, Hurlford and Cumbernauld were lurking all with games in hand, while Annbank appeared doomed to drop isolated on bottom spot with seven points.