Glenafton topped off a fantastic finish to their season with a dramatic penalty shoot-out triumph against a gallant Glasgow Perthshire side that came within a whisker of winning the West of Scotland Cup for the first time.

In the New Coin Automatics West of Scotland final at Newlandsfield it was the New Cumnock side that made the early running and from a first minute corner kick ‘Shire keeper Chris Calder did well to hold a header from Richie McKillen.  Despite their early pressure the Glens struggled to seriously test the keeper in the half again.  In 15 minutes a Ross Robertson header from a corner kick sailed over the bar and two minutes later a 30 yard thunder-bolt from Craig McEwan screamed past the post.

The Keppoch park side gradually worked their way into the game and indeed finished the half on top in terms of both possession and chances created.  On 37 minutes a viciously struck free from Andy Gibson was pushed over the bar by keeper Ally Semple and a minute later the midfielder was denied again as Semple at full stretch pushed his angled close range shot to safety.

John Dempster earned the Glens an early corner kick from which an air-borne Calder pushed a Ryan McChesney header, bound for the top-corner, past the post.  At the other end Semple cut out a Gibson cross comfortably clutching the ball under the bar.

As play swung from end to end it was Glenafton that made the breakthrough on the hour mark. McEwan picked out Gus Cochrane wide on the left flank who fended off defender Stewart Brodie before feeding Dempster in the box. The determined striker held the ball brilliantly before finding an angle for his shot which crashed off the base of the post and caught the ‘Shire defence flat-footed allowing the alert Ryan Millar to gather the ball and drill it home from 6 yards out. 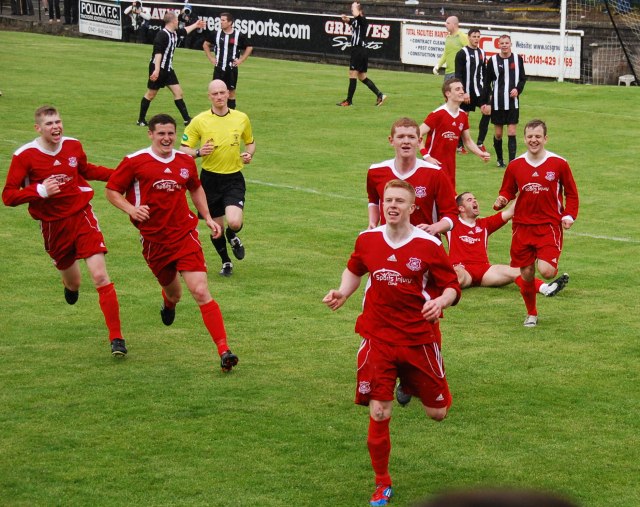 Three minutes later Millar turned provider when after good work down the right he squared the ball for Jack Steele in the box who rolled it on for Dempster to drill it low and hard only for Calder to get down low and clear the danger. Soon after the keeper denied the Glens’ striker again blocking his right footed drive on this occasion.

With their tails up Glenafton introduced Gareth Campbell for Craig Menzies but within ten minutes the Glasgow side had turned the tables.  On 68 minutes live wire Gibson twisted and turned at the right corner flag before whipping the ball to the near post for striker David Kirkwood, only for Richie McKillen’s intercepting header to end in the unfortunate centre-half’s own net.

Seven minutes later Gibson was the architect again his cross from the right partially cleared to the edge of the box where substitute Chris Flannery nodded the ball down for right back Stewart Brodie who swivelled and with his left foot hooked an unstoppable shot into the top corner – stunning goal! 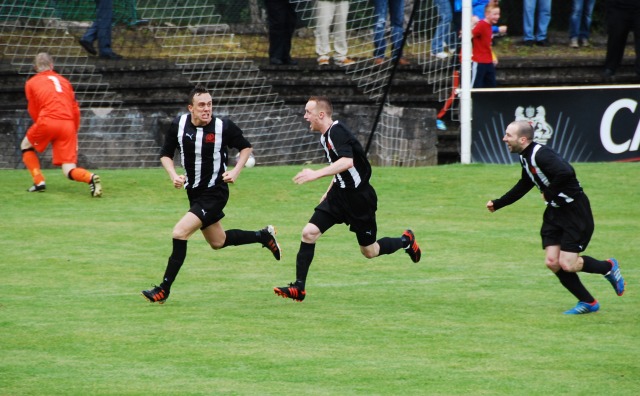 Glenafton responded by replacing defender Craig McEwan with striker Gareth Armstrong and play three up front.  The impact was immediate and the ‘Shire were soon on the back foot. On 78 minutes a Cochrane volley from inside the box whizzed past Calder’s far post. Two minutes later Millar gathered Armstrong’s knock down and skipped past Calder only for his angled shot to be cleared off the line by a composed Brodie.  Armstrong then came close to getting a toe to the ball in the six yard box after good play by Dempster.

With three minutes of regulation time remaining Glenafton were awarded a free kick at the right hand corner of the penalty box. Campbell’s chip to the back post was headed clear by Shaun Stirling to the edge of the penalty area where Robertson quickly played the ball back into a packed six yard box and as it broke loose Gareth Armstrong lashed it into the roof of the net.

A minute later a beautifully controlled header by Armstrong picked out Dempster on the six yard line only for Calder to pull off a brilliant brave block and then Robert McPhee make an equally brave goal-line clearance to prevent Campbell poking the loose ball home.

Both sides had half-chances from set-pieces in added time before the whistle blew to herald a dramatic penalty shoot-out. F/T Glasgow Perthshire 2 Glenafton Athletic 2

The sides were all square after two rounds with a 100% success rate, Paul Frize and David Kirkwood finding the target for ‘Shire and John Dempster and Gareth Campbell for the Glens.

Semple then saved from Frazer Malcolm before Ross Robertson tied the score at 3-3 going into the fifth round. 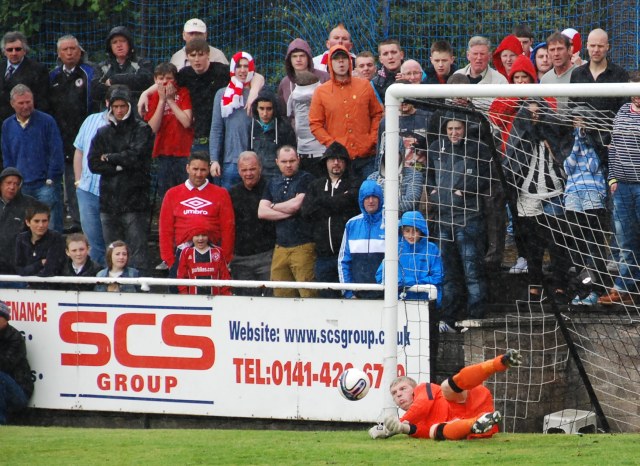 Andy Gibson’s spot kick crashed off the cross bar and Gareth Armstrong stroked his effort home to seal victory for the Glenafton and take the West of Scotland Cup back to New Cumnock for the third time. 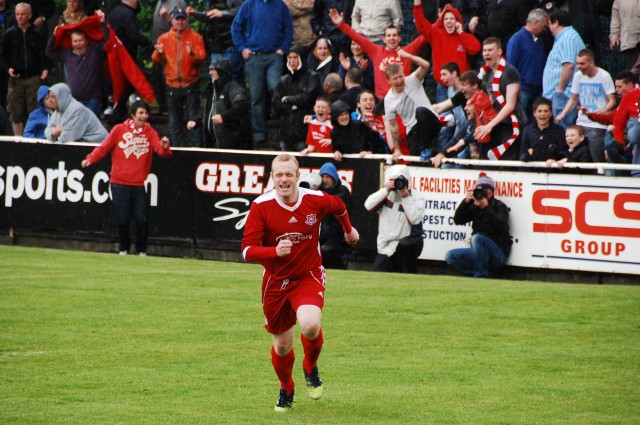 The presentation to the West of Scotland Cup Winners 2012-13