Dempster teams up with Darren

Having guested for Glenafton in the two recent friendlies against Stranraer and Irvine Meadow the club is delighted to announce that they have signed striker John Dempster.  Of course John is well known to Glenafton manager Darren Henderson, the pair having played together at Cumnock Juniors and Stenhousemuir under Campbell Money. 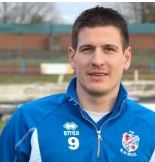 John began his senior career at St.  Mirren (2002) before moving to Stranraer later that season and then joining the Junior ranks, where he starred for Cumnock Juniors.  When then Cumnock manager Campbell Money took over the hot seat Stenhousemuir he returned to Townhead in the January (2007) transfer window to take both  John and Darren to Ochilview.  With 17 goals in 36 appearances for the Warriors, John stepped up a division the following January and joined Cowdenbeath, helping the Blue Brazil to back-to-back promotions from 3rd Division to 1st Division. John went on to score 20 goals in make almost 100 appearances for the Fife side before being released by Jimmy Nicholl in May.